Thought it was probably time we made a move and so we got up early to do the 40 odd miles to Ormos Fikiadha on Kythnos. We planned to anchor there overnight but after four attempts at anchoring and three more around at Ormos Colona, we abandoned it and headed round to Loutra. We usually have no trouble anchoring with our big Manson but it just wouldn't set, presumably because of the weed.

Loutra is a delightful little harbour on the North East of the island with a couple of little shops and the usual tavernas. It used to be famous for its hot springs and an institute was built there where the rich and famous used to go to take the hot mineral baths. The town has diverted the hot water down to the beach and fashioned a little rock pool where you can go and sit in incredibly hot water. It's a pretty shabby little pool surrounded by rubbish now with the odd bit of rope and empty beer can in it. You'd think the town would take a bit of care of it as they really don't have much else in the way of tourist attractions.

We went for a walk up the steep hill behind the town planning to walk 5 km to the chora but as usual went in the hottest part of the day so stopped when we got to the top. Masses of wild flowers are out and some olives trees seem to be being cultivated. We passed a couple of older Greek men on their donkeys transporting wood in baskets on their backs. I asked if I could take a photo and one of them waved his stick at me! 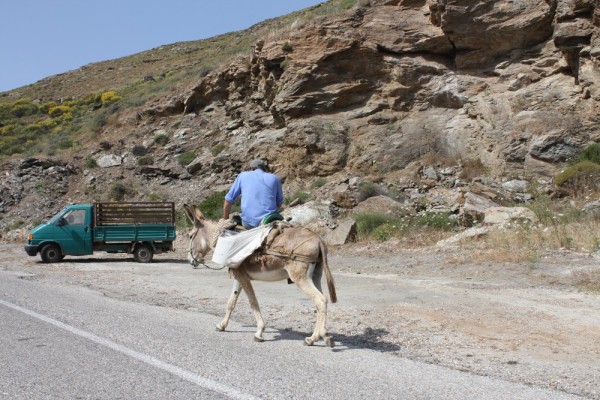