I don't know when I decided we had to go to Santorini. I know we were going to go there last year from Crete but the Meltemi kicked in and any delusions about going North were soon shattered. I'm not sure why everyone wants to go to Santorini but apparently it is the most visited Greek island along with Mykonos and Kos. I asked the American/Greek/German rental car man why he thought this was and he pointed at the bright, white houses clinging to the side of the volcanic rock and said 'That's why". 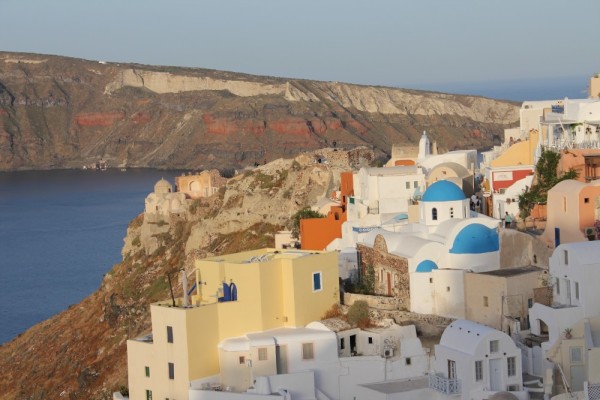 I'm not convinced. OK, it is on the cover of the latest edition of the Mediterranean Europe Lonely Planet. It is unique, a submerged caldera encircled by sheer lava cliffs with masses of white, oblong buildings clinging to the top. It is pretty. It has blue-domed churches. And it's supposed to have a spectacular sunset. But then so do lots of other places (except the submerged caldera bit). Three or four cruise ships visit here daily and thousands of tourists pour off them and off the ferries to swarm over it. The American/Greek/German says they all point at the poster of the blue-domed church and ask where it is. He tells them to just look and they will find it because he doesn't actually know which one it is.


Andy, being the sweet person he is, said he would go but refused to take the boat. There aren't many places to put your boat in Santorini. You can med-moor it by Kammeni, the volcanic island in the middle but that is supposed to be rat-infested and also full of trip boats. There are a couple of mooring balls up off Oia in the North by they are usually taken. There is a marina in Vlikadha on the south but that's difficult to get into when there's a south-west wind and silts up quickly. A few weeks ago it had to be dredged to let boats get out! I had dreamed of gliding across the caldera in the dawn with the sunrise turning the sea to gold so, with slight bad grace, I agreed to get the ferry. Do not believe Andy if he tells you I sulked for several days!

We left Matilda in Paros and headed off on the bus to Paroika. The ferry was already full to bursting when it arrived from Piraeus. It took about three and half hours to get to Santorini and, when we arrived and the doors opened at the back, we all stampeded off. On the quay, there were a thousand tourists waiting to board so it was reminiscent of coming out of the airport in Jakarta the first time I ever travelled on my own. I was so freaked I went back inside the airport until the crowds had gone and missed all the buses in to town. 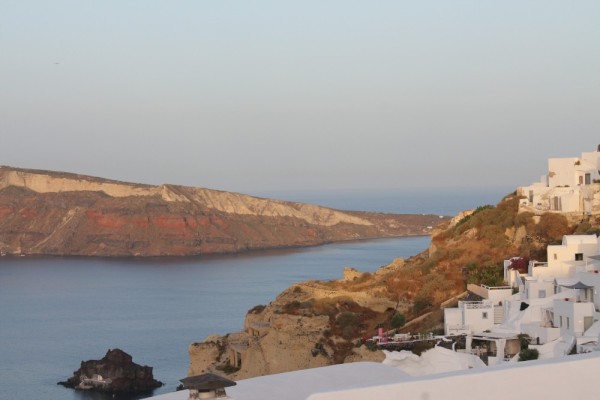 We were herded through the crowds with people shouting 'Hotel room?" "Come to my restaurant" "Do you want a hire car?" We did hire a car and Andy managed to haggle the cost of a little Nissan down from 60 euros to 40 euros which always pleases him! We stayed in Oia for the night which is the quieter town on the north of the island and went out for dinner and to see the "most spectacular sunset in the world". Unfortunately the weather had been hazy all day and by the evening was pretty much completely overcast so the most spectacular sunset will have to remain unseen and I will have to put up with all the other spectacular sunsets we see from the back of our boat most nights! 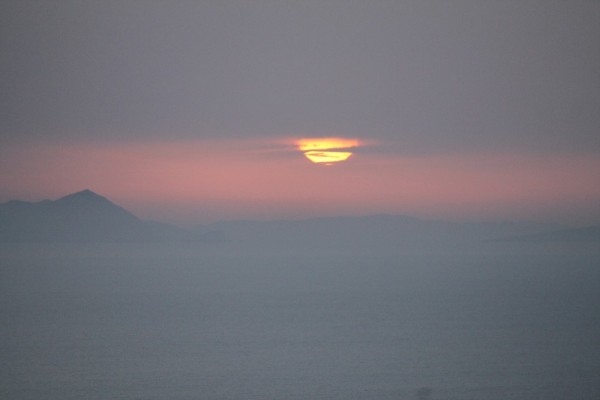 The following day, I got up at sunrise and spent a couple of hours walking round the little streets of Oia before the crowds emerged and it was lovely. Around every corner is a different view of the caldera or one of many blue-domed churches or a volcanic island in the distance. Unfortunately around every corner is also another beautiful little dress shop or jewellery shop or expensive restaurant. 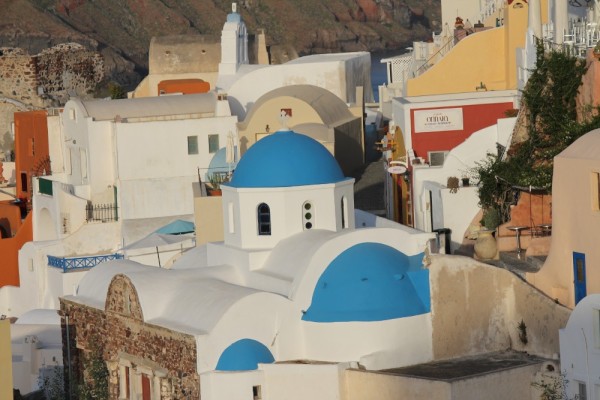 We also looked around Fira, the capital of Santorini. I say looked around, we actually spent 30 minutes there but it was so crowded and unpleasant, we got out quick and drove around the island instead.

Back at the ferry dock, we spoke to the AGG man again telling him we hadn't really enjoyed Santorini. "Oh I never go up there" he said "I stay down here in Port Athinios or go to Perissa where the hippies came in the 70s. It's much more laid back and has all the same views". Now he tells us.

As we are waiting for the ferry, the cloud comes down, the wind comes up and suddenly we have 35 knot winds and driving rain. We are squashed in the departure hall with around a thousand people, most of whom are Chinese or Korean and all seem to be together. They talk constantly and keep squeezing past us to get to a friend or relative over the other side. We are completely unable to communicate so just smile politely when they stand on our feet. 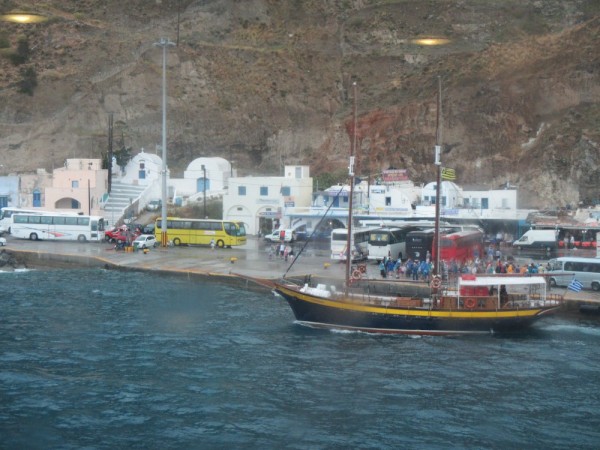 There are now one and a half metre waves in the caldera and when the ferry comes, two hours late, we have to make a mad dash to get on it as quickly as possible as it is riding up and down smashing against the quayside. As we run towards it, the noise of a thousand travel bags on wheels surround us and we are elbowed aside so that our fellow passengers can get to the seats at the front. 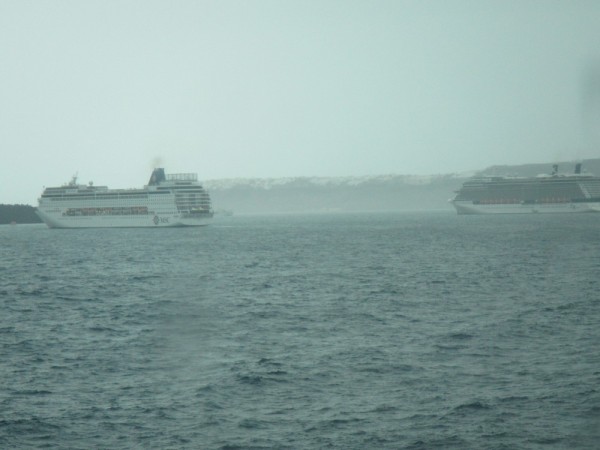 I'm still not sure why I wanted to go to Santorini but at least I never have to go again.