Our Italian/Italophile friends have always raved about their food and wine and I've been looking forward to sampling as much of it as I can but so far it's all been a bit disappointing. There seems to be a lot of pizza and pasta on offer but I can get that at home. We've had a nice panini or two, we sampled arancini balls stuffed with spinach which was OK and a couple of nice plates of pasta but nothing to get too excited about and, although the pastries look fantastic, I'm trying to avoid them! Today, however we went to Syracuse market and I am converted! Stall after stall of the freshest looking vegetables, stalls with just tomatoes but about 10 different varieties, fish stalls, seafood stalls, stalls selling dozens of antipastos, stalls selling draught olive oil, bread, cheeses, dozens of different smoked or preserved meats. Delightful smells are coming from the oil drum wood fires where they are cooking baked onions and sweet red peppers. 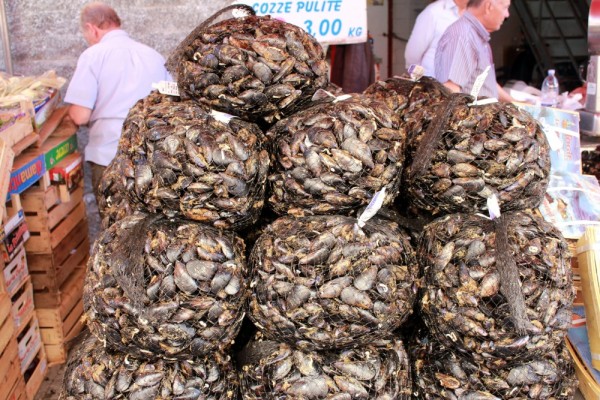 And what a fantastic atmosphere! All the stall holders are smiling and holding out dishes of samples to try. Little bruschettas with pickled veggies on the top, slices of smoked mozzarella, glasses of the local wine. 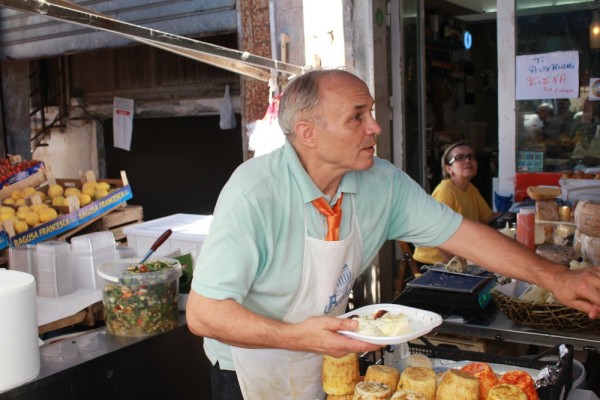 This showman has lots of women surrounding him, giggling, as he flirts with them and gives away samples of ricotta that he has baked. He crushes a clove of garlic on the plate and wipes it round, sprinkles olive oil on and some of the dried thyme sold in bunches and adds the chopped ricotta. Once you have tasted it, you have to buy one to take home and gorge! We had planned to come back for an antipasti tasting-plate for lunch but then we see him making a huge baguette for a couple of young men in the queue. He cuts the baguette in half lengthwise and hollows it out. Then he squirts olive oil on it, adds a layer of pickled veg, a layer of ricotta, a layer of sliced greeny-red tomatoes, more oil, a few crushed olives, some grated smoked mozzarella, more olive oil, several slices of see-through prosciutto and puts the lid of the bread on. Cut in half it is a fantastic lunch for two and cost 4 euros. 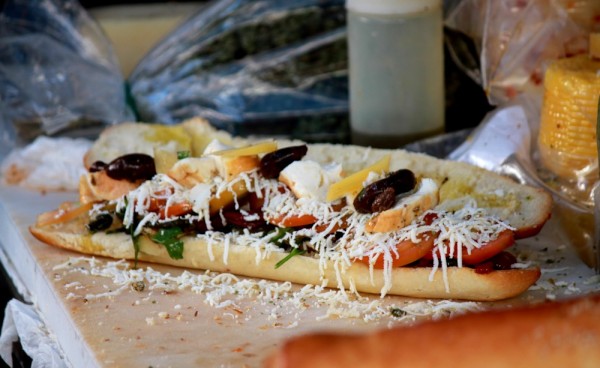 The young men tell us to order ours now. "If you come back in an hour, the queue will be too long". I take his photo while he makes our lunch. He insists on having our photo taken together. I think I am special but the Dutchman taking the photo says 'he asked my wife to marry him yesterday!" I still think I was special - but perhaps only for as long as it takes to make my lunch. 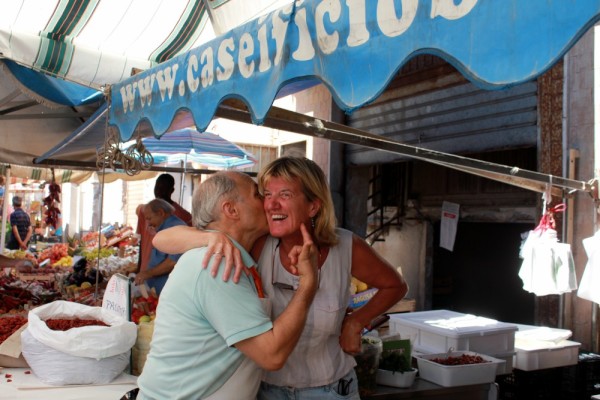