The weather continues to be good for down here, light wind, mostly cloudy, temperature a little below to a little above freezing. We are making our way north to the planned flight out tomorrow from King George Island to Punta Arenas in Chile. Depending on weather, we take advantage of the best options for outdoor exploration. Two days ago in beautiful flat water conditions, we kayak circumnavigated Enterprise Island. This is a location of former whaling operations, including a sunken 210-ft steel whaling ship that is partly exposed and to which we moored overnight. Also on that kayak trip we experienced an ice-fall tsunami, where a chunk of ice calved off of a glacier nearby and created a large wave, but fortunately we were in deep water at that moment and it was just a smooth, large ride (if taken bow-on). Here we did our only camping excursion, on an island of about 30 feet elevation (plus 20 of snow). Nice to get out of the boat for the whole night, watching Antarct ic terns defending their nests from the kelp gull attacks.

While motoring north through Murray Channel between Graham Island and the continent we had the best whale feeding show ever. Two slow moving humpback whales were feeding on krill, and seemed unperturbed by our presence. We could see the whales circle deep and blow bubbles, which apparently concentrates the krill in a group that makes for a more fulfilling mouthful. We drifted around there for over an hour, freezing our little shutter fingers off.

It's about over now. S/V Australis is the best of the handful of charter yachts that work in Antarctica, with hot fresh water showers, semi private cabins, lots of capacity, and a courteous and well seasoned crew. A sailing experience this was not, and given the territory, probably for the better. She is a tough, heavy steel vessel with a modest mast and sail plan, which provided some roll stability and economy when conditions permitted. Certainly this was a much more intimate Antarctic experience than a cruise ship, and we are totally thrilled with the experience!
Comments

A Walk on the Beach

We are making our way north now in the second half of the trip. Twice we have been blocked from using a preferred anchorage because of still-frozen sea ice, and the "preferred anchorages" are few and far between. While nice looking coves of moderate anchoring depth are relatively plentiful, most are either with excessive risk of becoming embayed or even crushed by drifting icebergs, or have hard rock bottoms that an anchor cannot bite into. Two days ago we sailed (motored) until 2am because of this, but the so-called night sailing was not a problem because it was not very dark.

We have had more opportunities to kayak, which is quite nice to get this silent connection to nature. It is with some fear though, because a fall here, in water constantly teeming with ice chunks, can be life threatening, even though we wear cumbersome survival suits and are shadowed by the dinghy. We went to shore near our anchorage for a beach walk, and had an entertaining time taking funny photos around ice blocks, studying the krill and kelp in the tidal pools, and listening up close to the seals snore.

I would love to make modest overland excursions, climb some hills or ridges by ski, but there is little that constitutes "moderate" here. The vast majority of the shoreline is steep-to glacier ice, requiring ice climbing gear just to get off of the dinghy, followed by numerous crevasses and avalanche danger. We met up with an Australian ski-mountaineering party whose guide was limping with a blown out knee, victim of an avalanche one day earlier.

On January 6, the Orthadox Christmas, we were at the Ukrainian Vernadsky Station, where celebration was in full swing. This former British research station was immaculate, and even included a quaint pub, where we met with the Australian adventurers, the crew of a French yacht, and several Russian and Ukrainians. We have also stopped at the British Port Lockroy (southernmost post office in the world), and an Argentinian (dour) and Chilean (warm welcome) station as well. Our Natural Habitats guide, John, somewhat rolls his eyes at these station stops, saying we are on a wildlife exploration tour, but actually the penguin population at these stations is abundant (and quite a stench).

All is well, only a few more days left!
Comments

We have moved south to the Vernadsky research station (Ukraine) at latitude 65d 15m south, about 75 miles short of the Antarctic circle. The sea ice conditions are becoming more concentrated, and we often maneuver and plow through ice fields pushing small and occasional large blocks out of the way, especially in the Lemaire Channel, a narrow passage that funnels and traps large bergs. A fiberglass boat here would be flotsam in minutes! This will likely be our most southerly point of the journey, the ice conditions preventing much more southing. The sculpture and colors of the ice is incredible. We have seen perhaps 20 leopard seals, a sleek and spotted large seal with a toothy jaw that holds the top spot of the food chain short of the orca whale, usually napping on a small ice floe. We have walked through dense gentoo penguin colonies, where couples tend to their rock nests and incubate their one or two eggs, taking turns jumping into the sea to feed. Yesterday the win d moderated enough to launch the kayaks, which allowed us the opportunity to get even closer to the wildlife. The water is so clear we saw penguins swimming and diving deep in search of the small krill, the primary food source of the Antarctic. This morning we sat in the dinghy still strapped to the top deck and watched groups of twenty gentoo penguins feeding, their playful arcs sploshing and rippling the water's mirror surface, while the sun warmed our backs. Tonight we expect to anchor in a place suitable for camping. The temperatures hover around freezing, and it can be very cold on deck while underway, but that's where the action is. We're having a blast!
Comments
Older
Contents 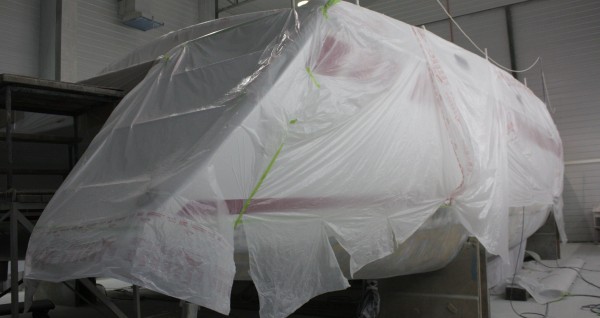