We left a heat wave (30s) in England on Sunday afternoon and arrived back in Darwin at 4am on Tuesday. We seem to have lost Monday somewhere along the way! It is also in the 30s in Darwin with little wind so we have been getting up early to try and get jobs done before it gets too hot. The sun beats down mercilessly from a cloudless sky and no rain has fallen for months now. However, there is no evidence of any water shortage. The luxury houses surrounding our marina all have lush tropical gardens and immaculate emerald green lawns - a result of having sprinklers going all night while the odd empty plot is burnt brown. When going for a walk in the early morning you have to dodge the large puddles and sprinklers.

Over half of the boats have now arrived for the rally and at last we are meeting up with colleagues old and new. Friday here was fireworks night, for Territorial Day we believe, although a local said it used to be called Guy Fawkes Day. It is the only day of the year when you can buy and let off fireworks (more Aussie restrictions) and there were massive queues all day at the shops selling fireworks. We went over to the Sailing club at Fannie Bay (picture above) and enjoyed an early G & T looking out over the beautiful bay before the crowds started to arrive. We met several friends from past sailing venues and many new colleagues who will be with us on the rally. We had a most enjoyable evening here, a good meal while watching a splendid sunset over the water, followed by fireworks. There were fireworks going off everywhere, as every family seemed to have their own collection, but the small and not so small fireworks on the beach were unable to compete with a wonderful civic display from a barge out in the bay. 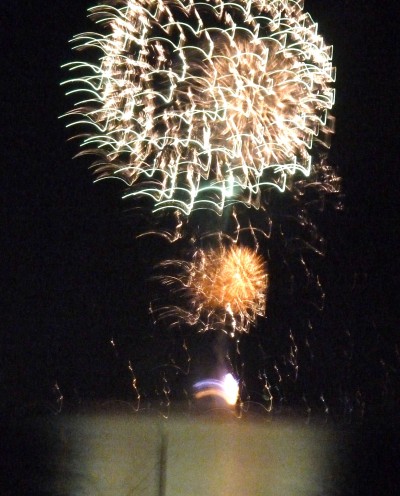 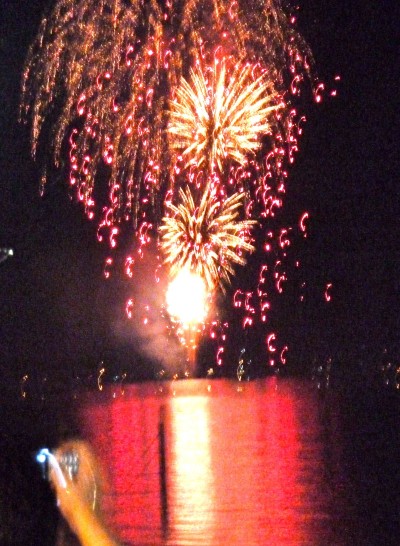 One couple took advantage of the one night of fireworks to have their reception at the Sailing Club and had their photos taken in front of the fireworks. The picture unfortunately doesn't do justice to the scene. 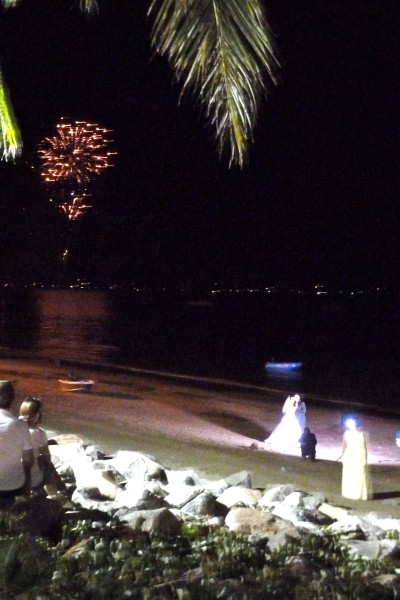