06 September 2011 | Komodo Islands
michael and jackie
We couldn't leave this area without finding dragons. Rinja Island and Komodo Island are the main places where Komodo Dragons, can be found. These large lizards are fierce and capable of killing and eating humans. We anchored in a deep inlet off Rinja Island where there is a small jetty which links to the ranger station of the Komodo National Park. At low tide we were able to watch monkeys coming down to the beach looking for crabs. Inland there were even more crab eating Macaques. Troupes stop to watch you as you walk through the bush. We also saw the occasional monkey hanging in the trees. 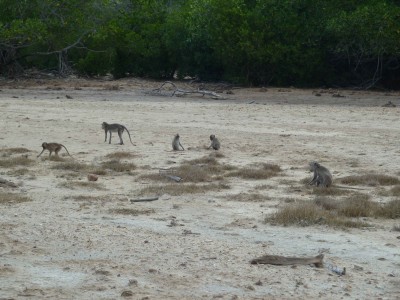 Our main purpose, however, was to seek out the dragons so we arranged an early morning hike with a ranger the following day. Early morning and evenings are the best times since during the hot midday sun the dragons tend not to move around too much.

The Komodo Dragon is quite remarkable. Large (see picture) and actually quite violent when they feel like it. Our first sighting of one was unromantically by the huts near the ranger station. One or two dragons come down there attracted by the smell of food. We were assured though that they weren't fed. We headed out, led by a ranger armed with a long sturdy sticks with two prongs on the end to push away attacking dragons. He explained reassuringly that you aim for the back of their heads where they have a weakness. He also told us that he had recently been helping the BBC film the dragons. According to him, the British photographer was very brave, but the Korean photographer kept running away.

In the dry season the lizards live in a woody valley. There are some large fig trees some of which twirl round palm trees slowly strangling them to death. Ideal hiding places for monkeys and young lizards. Amongst the scrubby bush below the trees you come across large holes dug in the soil. These are where the dragons lay their eggs. They dig a number of holes as decoys and guard the eggs against predators. Once the young dragons have emerged they are on their own, and they climb up trees to escape predators, including their parents, and feed on whatever they can catch including monkeys. It's quite a tough life as a young lizard when even your own mother may eat you.

We soon came across the Komodo Dragons. They move surprisingly quickly across the ground when they want to. Apparently only for a short time though. Most were quite obliging and would pause for a photograph, although we kept a careful distance. 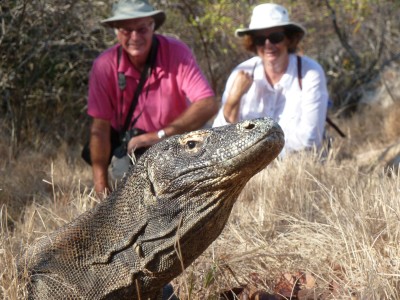 The larger dragons are not quick enough to catch the monkeys. They feed on the occasional wild pig but generally these are too clever and fast for them to catch. 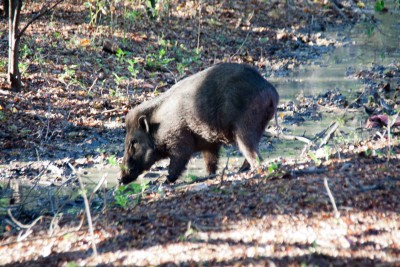 Their main target are water buffalo, which sees amazing given their size. The Dragons are amazingly well camouflaged, so when a water buffalo gets close one of the lizards will bite the buffalo in the leg. The poison in the saliva from their long tongues gradually weakens and kills the water buffalo. 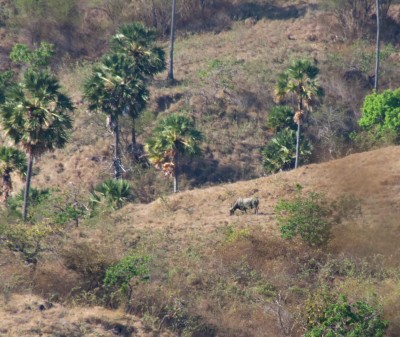 Once it dies in about two weeks, it is time for a dragon feast and everything but the skull is consumed. After this the dragons do not need to eat for about a month. We climbed to a high point above the bay and the dried out river bed and spotted some water buffalo in the distance.

Down below we could see Lady Kay nestled in the bay. 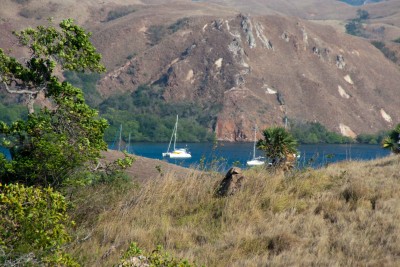 . We slowly descended back to the ranger station, quite tired even though it was only a 2 hour walk, and set sail for Gili Lawa Laut.
More
Comments
Newer Older
Contents