trip to the highlands

22 September 2011 | Bali - Lovina Beach
michael and jackie
One of the highlights of our Bali visit was a trip up into the mountains with friends, Will and Margaret, from Atlantia.

Our first point of call were some hot springs about ten miles inland, Air Panas Banjar. "Hot springs?" you might say. Why on earth hot springs in the Balinese climate. Actually the hot springs were a lovely flowery oasis. Three different areas with different strength fountains to massage you and two pools to relax in. The water flows from one pool to the next through fierce looking stone naga. We got there early before it became crowded, and the effect was just magic. 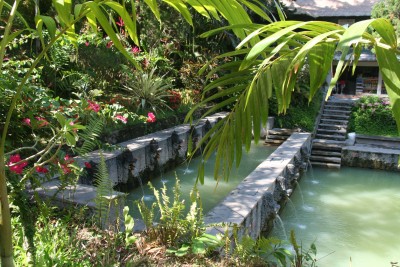 From there we went to town of Singaraja and visited the museum and the almost adjacent royal palace. Singaraja is the second largest town in Bali and was the Dutch administrative capital. The Bali royal family had a chequered history being in more recent times deposed (Japanese)and reinstated (Dutch)then deposed again (Indonesian). To our surprise we met the daughter of the last queen, living in the palace. She was their looking after her elderly mother. Her father, was a writer and the palace has numerous ancient Olivetti's as testament. She told us how the Japanese were going to shoot her father but converting to Christianity saved him. We were not clear why - the Japanese shot a lot of Christians, but in his case not. Her father was also responsible for the development of Lovina, building the first hotel there shortly after independence. She told us that she was planning to write something about Indonesian women. She was concerned that the ambition of many less educated Balinese girls was to marry a foreign tourist. It was quite a treat talking to her before she retreated back into her house, one of the largest round the courtyard of the palace buildings.

After the palace we headed higher to the waterfalls at Git Git, a spectacular drop of 120 feet. 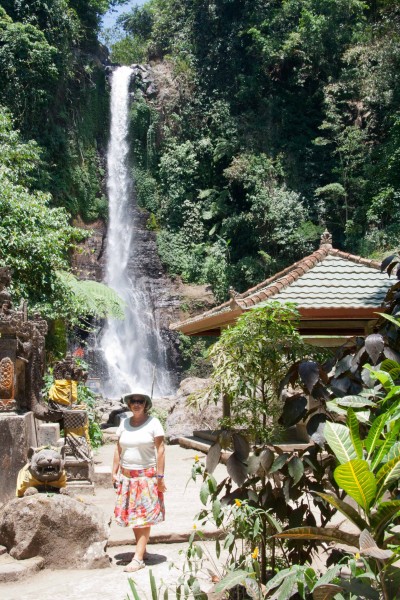 To get there you walk up a path lined with tourist shops and at one point a poisonous green snake lay asleep after having consumed a frog which could be clearly seen in outline half way down its body. 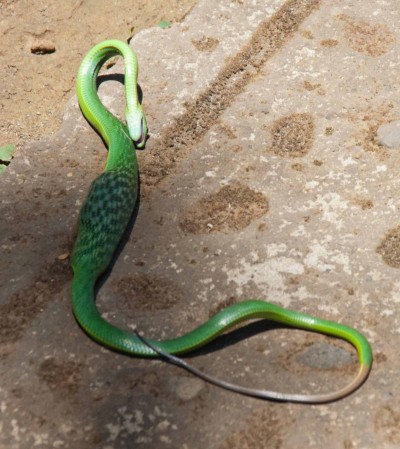 After a time you start to recognise the same items in the shops. There must be one large warehouse somewhere supplying these shops. Each shopkeeper wants to lure you in with a special price which can often change once interested. The opening price for anything drops as you walk away from say 50,000 to 40 to 30 to 20 at which point you turn and do the deal for 15. "Special price for you 15 - perhaps you like to give 5 for good luck to my daughter". 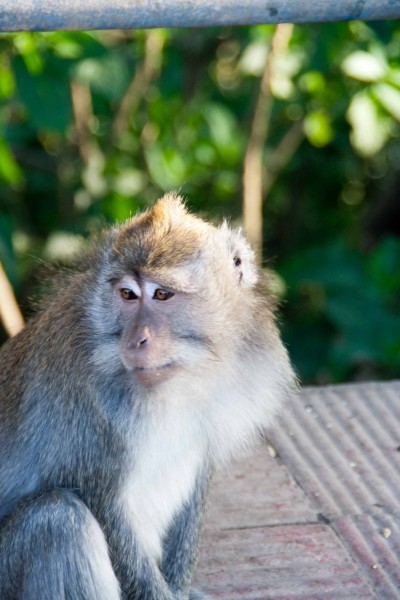 On to the Hindu - Buddhist temple of Pura Ulun Dana Bratan. Its setting by one of two adjacent crater lakes is so beautiful it is featured on 50,000 rupiah notes. 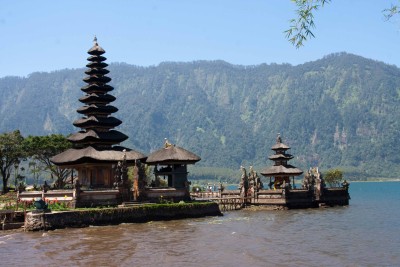 Curiously the temple is situated by a mainly Moslem town whose main mosque has a high tower built to overlook the Hindu temple. Interestingly quite a few of the visitors to the temple were muslims.

The nearby village in the mountains has a wonderful market, the most wonderful thing about it being the tremendous variety of fresh fruit and vegetables which are all grown, mainly organically, on terraces around the crater lakes. It was like heaven to come across fresh strawberries, grapes, new potatoes, mange-tout peas, courgettes and even mushrooms to name but a few - things we haven't come across since we left Australia and a welcome addition to our usual diet of string beans, aubergines and papaya. The quality and variety is so good we could hardly bring ourselves to bargain, in which case the stall holders would give us extra fruit to compensate for our stupidity in not getting the price down sufficiently. Also the mango season is in full swing and the mangoes here are by far the best we have tasted anywhere. We vowed to come here to stock up before leaving Bali. The market also has a range of tourist products and some especially resolute and amusing watch salesmen offering 'genuine copy Rolex' and other expensive brand names. The price drops from £50 to £10 as you walk away. 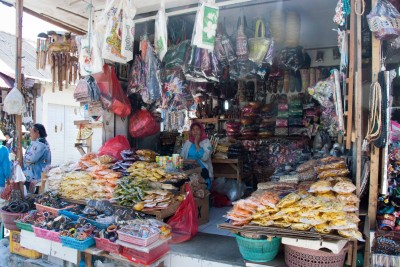 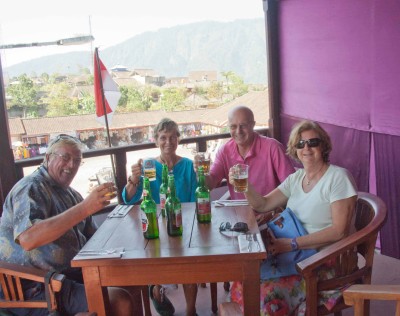