Arrival in Burma is a strange experience. The plane glides over vast tranches of flat water, the Irriwady Delta, bifurcated by low lying paddy fields. In what ever direction you look small glistenings can be seen on almost any raised land feature. The glistening is the golden tops of the pagodas that adorn almost every hill. Yangon (Rangoon) airport is modern but semi deserted and soon we are almost alone as we wait to get our visas approved.

Once clear we were met by a driver and guide who escorted us to our rather smart car. The first thing you notice in Myanmar is that almost everyone, young and old, male and female wears a longyi, a full length strip of cloth, the particular design of fabric also defines the cultural group to which the wearer belongs. Male longyis are sewn into a cylinder and are knotted at the front, while female longyis are wrapped around the body. Male longyi wearers have the rather disconcerting habit of unknotting their longyis and flapping the wide cylinder, presumably to allow air to circulate, before knotting it again. They also play with their knots a lot! 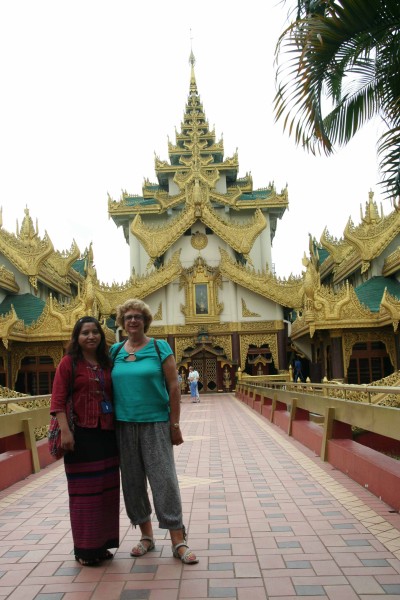 The streets in Yangon are unusual in at least one respect. Motorbikes and bikes are banned, so there are only cars and buses on the roads. Once you have crossed the Yangon border Asian normality returns with hordes of bikes, tuktuks, motorbikes, scooters, water buffallo etc etc. When the generals changed the name of the country to Myanmar they also decreed that traffic should be on the right. This creates all sorts of unresolved problems since most of the vehicles, including the buses are second hand Japanese. The town buses have had their outside doors barred up and a new door cut on the pavement side. The smaller buses disgorge their passengers straight into the overtaking traffic.


Our car took us to a seriously posh hotel, the Governor's Residence. The hotel is in the "embassy quarter" ex colonial buildings and more modern replacements along quiet verged roads. At each junction are rather tatty looking sand-bagged gun emplacements. Only those outside an actual embassy seemed manned.

After checking in we headed through the car clogged streets to the centre and the famous Shwedagon Pagoda, a massive golden stupa perched on a man-made mound. The mound on which the Schwedagon pagoda was built was created with the earth dug out for the lake which is the centre piece of the nearby Kandawgyi park. The park is a popular place for strollers, protestors, artists and astrologers. We saw one astrologer's pitch which boasted that he had a degree in Geology!

After strolling in the park we went up to the Schwedagon pagoda. Tourists have to pay and can then ascend by lift. We chose to,climb up one of the four, very long and elegant covered stairways to the top. Either side of the stairs are stall after colourful stall selling offerings of flowers and other goodies to present to one of the Buddhas at the top. 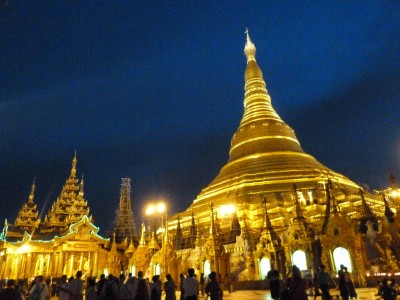 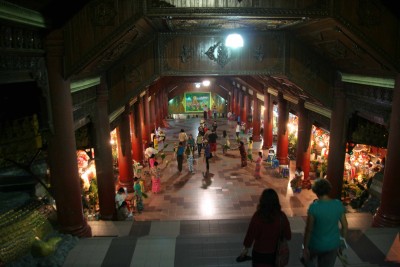 We walked round the massive gold stupa with its enormous diamond centre-piece. As you walk round the stupa you pass numerous smaller temples and Buddhas. Monks meditate in front of Buddhas and locals fill the prayer halls to pray and or meditate. Around the central stupa families seek blessings and try to gain merit. A popular method is to make a donation and then pour water over an elephant sculpture. You pour a cup over for each year of your life, preferably on the weekday of your birth. The day of the week on which you were born is very important to the Burmese for fortune-telling, deciding on marriage suitability and most aspects of everyday life. 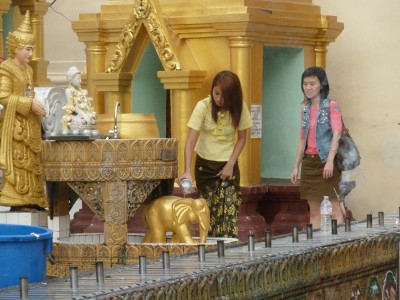 Elderly parents take photos of their grandchildren in their monks' habits. In fact everyone takes photos of everyone and everything. Nuns and monks sit contemplating. 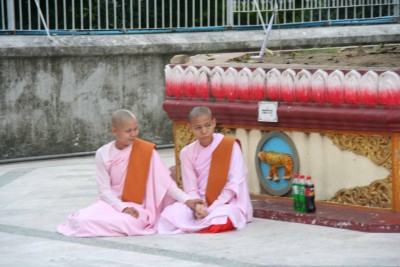 As evening approaches, the gold dome is illuminated by the rays of the setting sun which set the gold aglow. After the sun has set, the whole area is lit up by multi-coloured fairy lights, and all the Buddhas have flashing halos - quite a site and reminiscent of a fairground. It's a curious mix of religious veneration and commercial schmaltz which we were to find at many pagodas.
More
Comments
Newer Older
Contents