Leaving Yangon for the Golden Globe you pass through busy wide streets laid out by the British. We pass through the university area, often quite dilapidated buildings in poorly managed parkland. Our guide tells us that the military closed down the university for a period and built out of town universities. However no one wanted to use them. Later we saw a massive "IT university" an enormous edifice totally empty, stranded in a remote village. A monument to military stupidity and grandiloquence. Past the large lake where Aung San Su Chi lives we reach the city boundary where motor bikes, tuck tucks and bicycles re-appear. Remarkably they are banned within Rangoon, making it almost a car only zone.

On the outskirts we stop at a war cemetery. 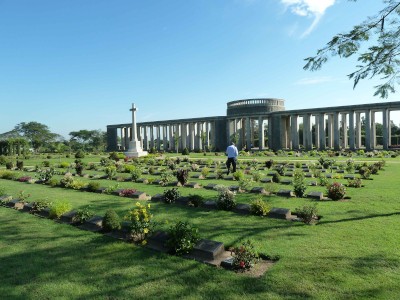 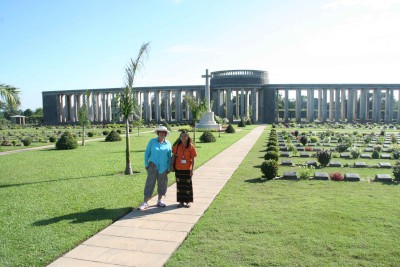 It's a poignant,beautiful spot. The graves of thousands of young men lie here, still tended and often visited. To our eyes surprising are the long lists of colonial soldiers killed. Not just Indian troops and Ghurkas but soldiers from all over Africa killed in the 1944 -45 final phase of the war against Japan in Burma. 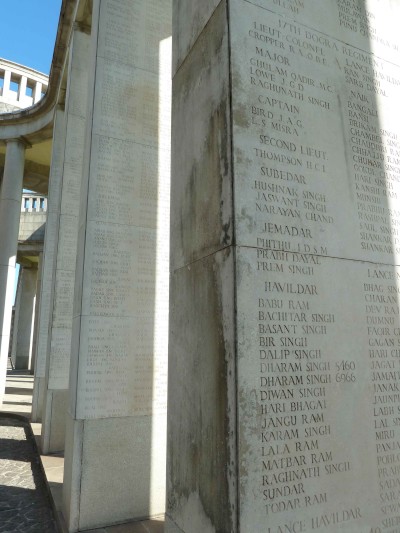 As the road reaches the countryside the inner lanes of the road are frequently covered with rice being dried. 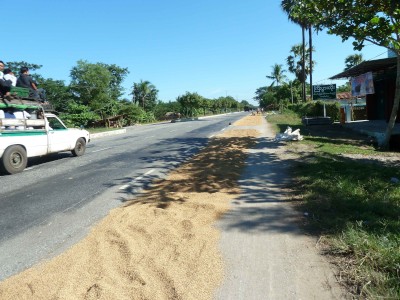 Whole sections of road are brown with layers of drying rice. We stop by a river where fish is being dried. 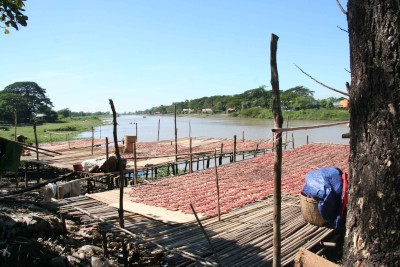 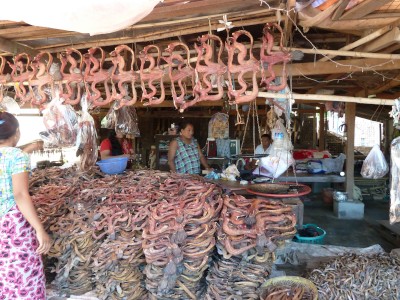 By the riverside families stuff containers with rotting fish to make fish paste. Apparently the more rotten the better.

We arrive at the base camp for the Golden Boulder, a dusty bus station where 20 or more large trucks are parked. By the side of the trucks are rickety steps, a bit like getting on an airplane. The rows are packed close together, six people to a row, even Air Asia would be impressed. The drivers do not move until the truck is absolutely full, a source of much argument and debate. Should one large American pay the same as a skinny Asian child? 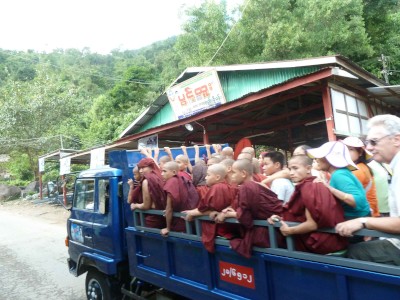 The truck roars off up the narrow mountain road. As it hurtles round the tight switchbacks the advantage of being packed like sardines becomes obvious. There is no where to go. You could only fall out if everyone fell out. The truck stops a few times on the way up to wait for trucks coming down the hill. The waiting seems inordinate in the stifling heat. Eventually we arrive at the final station from where we walk. The pagoda still seems to be a long way up, and it is. Unless you hire a team of porters! Four strong teams of young Burmese men carry tourists to the top on bamboo litters made of bamboo wit canvas stretched across, a kind of sedan chair.

"We like thai people best - they pay to be carried up and down. Americans heavy! Only pay for one way - so we charge them double." Europeans, German, French and English tend to walk gamefully.

The walk wouldn't be too bad except for the heat. We circle up the steep paved track. Followed by a group of porters. "You vey tired". "Still long way". "Maybe your wife tired". At last after an hour or so the top. Our hotel for the night is right on the ridge we sink into a chair in the cool interior to rehydrate.

The short final walk to the golden rock takes you up paved stairways past the ubiquitous sellers of trinkets to a remarkable rock. 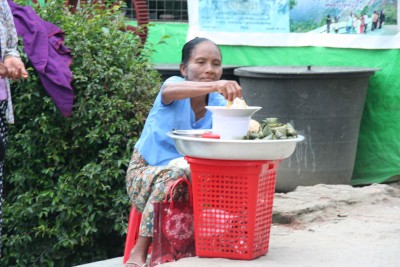 Monks, children and adults all head for the famous rock. 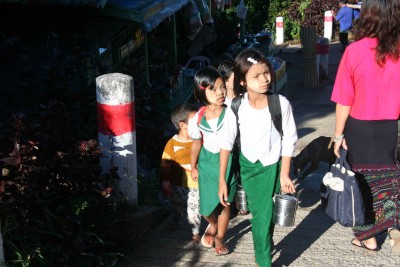 The giant golden boulder balances on a lower rock pivoted on a hair of Buddha, allegedly. Over the golden boulder itself a stupa has been constructed. A small group of men busy themselves on the boulder sticking on gold leaf and picking up fallen gold. The views are stupendous from the top, along the narrow ridge. Twinkling in the distance you can see numerous small monasteries some nestling on the slopes, others on the adjacent peaks. THe really energetic pilgrim can do a four day circuit of the mountain pagodas.

As at all Burmese holy areas you walk bare foot. This can prove quite hazardous. Apart from the dog muck risk, when wet the tiles prove very slippery, making for dangerous steps. We saw couples young and old slipping On the tiles made wet by the mountain mists.

Back at the hotel we made an important discovery: hidden inside Myanmar beer caps is a message "thank you" or "free beer" or even money refunds. So far we have gained two free beers and about 20p in winnings. Maybe it's a reward for the merit we earned by climbing the mountain .

Needless to say the descent was a lot easier, apart from the aching muscles. Numerous Thai and Koreans whizzed past carried aloft by their porters. We stopped and admired the numerous trinket stalls, including the sellers of native medicines. Along with herbs, ground bark are monkeys feet, snake skins and animal skulls. One stall holder had just caught a long cobra. The flesh was being smoked and the unfortunate snakes skin was being stretched out to dry. "No photos,no photos" he cried. It's illegal.

Finally the return drive which seemed a lot easier despite the seating arguments, and we were off to Hpa En.
More
Comments
Newer Older
Contents