Papeete Isn't So Bad, and the Rest of Tahiti is Pretty Nice Too We've been berthed just outside of Papeete, the capital of Tahiti, in the Society Islands. We'd been told by other sailors in the know and the cruising guides that Papeete "wasn't what it used to be" and had "lost it's charm." It used to be quaint and small, we were told, but had grown so big and cosmopolitan that only a quick visit was merited. Move on to the other more remote islands as quickly as possible.

But we loved Papeete! Sure, it was bustling. And we saw our first highways since we left the Americas. But we enjoyed it nonetheless. As is often the case, when places are downplayed as much as Papeete was, we were pleasantly surprised. 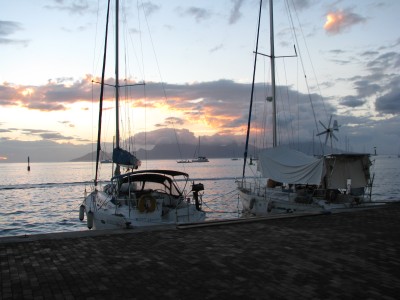 Maybe it has lost its "charm," but what does that mean really? Paris, London, and Prague are no doubt much different than they were in their sleepier yesteryears, but they are still awfully cool places to visit. Papeete was fun, vibrant, and quirky. Sure there are downsides with heavily populated areas, but after a couple of months anchored off of desert isles, it's kind of nice to be able to step off the boat onto a dock, have onboard internet access, and be a walk away from a major grocery store and a bus ride into a town filled with good shops, and restaurants. 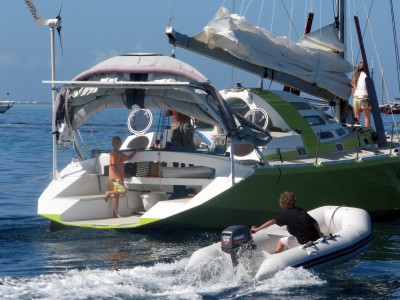 Perhaps the best part of our stay was getting to know our neighbors aboard "Coco 'n Co.," Marc, his wife Coco, and their three sons, Luis ("Lulu"), Tom ("Tom Tom") and Remy. We noticed the boat before we noticed them. It is hard not to. Painted a fluorescent light green, Coco 'n Co is a striking boat. Marc built it himself after a design from a Swiss builder. It had the futuristic look of something that Frank Lloyd Wright might have done if he made boats instead of houses. The boat has curves where most boats are flat, and is a cross between a Catamaran and a monohull design. Folks walking the dock typically stopped and stared.

But the family, not the boat, is what drew us in.

The boys were a treat. Each day they sat in the boat, being home schooled by Coco and Marc. The pain on their faces showed how much they wanted out. Remy, or James Bond as we knew him, for his daring antics, practiced his English with us. I got a cut on my leg, and one day he came and over to commiserate, pointing to his own scars and saying, " I traverse window - 47." Meaning that he had, when he was even younger, walked through a plate glass window, and gotten 47 stiches.

Lulu and Tom Tom were just as outgoing, Lulu coming over to prance about on stilts that he'd got for his birthday, and Tom Tom hailing us from trees in which he'd hidden himself. 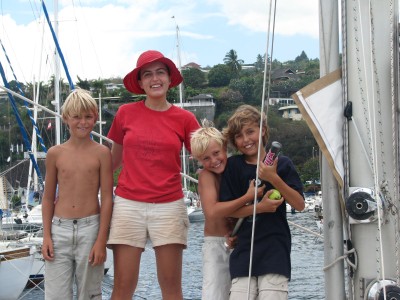 Marc and Coco were equally warm. When Marc learned that we had errands to run, he readily offered us his car. We readily accepted! Coco designs high-end and haute couture jewelry, and gave Sima a beautiful bracelet. It was nice to be berthed next to a couple who liked good conversation. We miss them already. 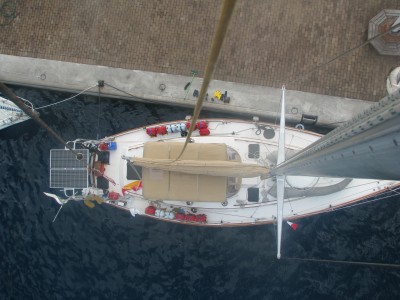 As beautiful as French Polynesia is, it is also incredibly expensive. We won't miss that. We went out for dinner our first night there, for burgers, pasta, and beer. $100 apiece! For a bad burger! A can of coke for $5.00. A beer for $10.00. We eventually learned to stay away the restaurants at the marina, and to shop at the nearby Carrefour supermarket, where prices were much more reasonable. 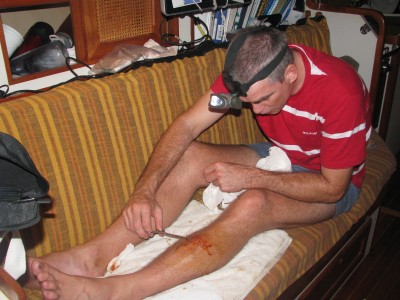 About the cut on Paul's leg -- we've stayed injury free on the boat, but it's when we get to land that problems arise. Well, for Paul anyway. He lost a toenail in the Marquesas playing soccer with cleats that were too small. And out for a run one night in Papeete, he stepped into a culvert that was covered with grass. He plunged into a hole up to his knee, and cut his shin against the side. It was a pretty good cut, and we needed seven stitches to close it. It certainly could have been worse. Sima accompanied Paul to the ER, and watched the doctor stitch it up, and, armed already with sister Joanne's onboard tutorial, is ready to take action should this happen at sea some day. 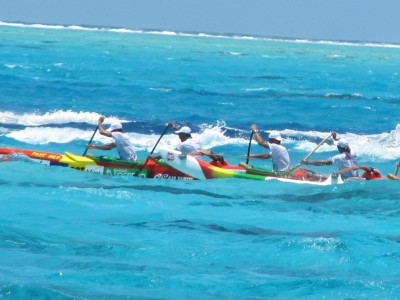 After a couple of weeks in Papeete, we sailed up to the famous island of Bora Bora. The attraction here was the annual "Hawaiki Nui Va'a," a marathon outrigger canoe race that goes over the open ocean from island to island, finishing at Bora Bora. We anchored our boat inside the reef, about a mile from the finish line, and had great seats to watch the canoes. After the race, we rode the dinghy over to the finish line, at the beach around the other side of the reef. What a site! Hundreds of boats and thousands of bathers were camped out in the shallow water, walking from boat to boat, drinks in hand. Music played from bars on the beach, the racers mingled with the fans or just sat in shallow water resting muscles. It was a fun way to spend Halloween Day.