Around the South Island, Part One

We're back on Leander after a month exploring NZ's South Island by station wagon.

We bought a cheap 95 Subaru Legacy Station Wagon, in pretty good shape, and took it around the South Island, logging some three thousand-plus miles, with nary a problem. (Please stop reading here if you're a prospective purchaser of our car.) We did have one minor overheating issue, but fed the radiator a steady diet of "Stop Leak," and that seemed to solve the problem after a couple of days.
We left the boat at the end of March, which is the beginning of Fall here. We hustled south, not exploring much of the North Island along the way (we sort of live here), except for a whole lot of gas stations (the Subaru guzzled). We were headed for the South Island, which is fabled to be Lord-of-the-Rings like.

We stopped in Wellington on the bottom of the North Island, after a two-day's drive. We were interested in the Te Papa Museum, which we'd been told was worth a visit. It really was, with some fascinating exhibits about NZ's geological development and settlement by the Maori (pronounced "Mawry" or even "Mary" here).

But the real story of Wellington was how cold it was. We were wearing sandals and shorts when we left Auckland earlier in the day, but in Wellington, it was just barely 50, rainy, and blowing fiercely. As our car cruised slowly along the waterfront, we watched in disbelief as the locals made their way against the wind, hunched over and tightly clad in snow parkas, hats, and mittens. Uh oh! Had we waited too long to take our trip, missing the warm weather completely? Must we score one for all those insufferable types on the dock, who, when they weren't giving us unsolicited advice on our varnish work, admonished us that we were working too hard on our boat? "Why don't you go away? Why delay? You're going to miss out on all the fun! Go now!"

We got out of the car, piled on our own clothing, and headed to the museum dressed like a pair of Eskimos.

The next day, we took the car ferry from Wellington to Picton, at the north end of the South Island. The three-hour ferry ride is the only way to connect by car between NZ's two islands.

As the ferry set out to sea, we remembered that we had thought about sailing around New Zealand, but had decided against it because the wind and seas were reported to be a bit rough. How 'bout it! We had been out in some pretty big (but relatively benign) seas in the open ocean, and had seen some small choppy races in places like Buzzards Bay and in the Caribbean, but they had been nothing like this. As we hung on to the rail, with the huge ferry rolling heavily, we looked about at a washing machine of big rollers, going this way and that, dancing, slapping, and crashing into one another.

The wind was pretty good, at about 35 knots, but the real culprits were the Tasman Sea, setting from the West, and the Pacific, pushing in from the East. The two opposing forces meet head-on at the narrow funnel of the Cook Straight. It gave us a sense of what it might be like to try to get around one of the Capes in the Southern Ocean. We were glad we weren't sailing.

The seas calmed closer to Picton, and there were dinghies sailing about the harbor as the ferry approached the dock.
Eager to start exploring, we chatted up a fellow at a gas station who was filling his car next to us. "Hey, do you know of any good places to pitch a tent around here?"

"Uhm, how about my front yard." As it was late in the day, it was a done deal.

(An aside: this offer was typical Kiwi. Time and again during our trip we met up with similar small and large kindnesses.)

After drinks inside by the fireplace with our host, we slipped outside and into our sleeping bags, huddled together for warmth.

We awoke the next morning to the voices of the neighborhood kids on their way to school. "Hey, why are those people camping on the Weber's front lawn?" We spit our toothpaste back at them in response, and indignantly struck camp.

The climbing sun warmed the day, and it turned out that Wellington's cold had been a false alarm. Yay! Out again came the light clothing.

We spent the next two days on the road, pushing further South, with our campsites improving each night (not hard to do when your first site is someone's front lawn); a beachfront the next night and a wooded meadow the night after. We were headed for Dunedin, where we planned to make our first extended stay.

Dunedin is about three quarters of the way down the South Island, on the east coast. We'd heard that it is Scottish flavored, as was evidenced by the name given by its original Scottish settlers, Celtic for Edinburgh.

We arrived on a warm and sunny day. The town was, in fact, a miniature Edinburgh. We'd been to Auckland several times, a city that is very much an ethnic melting pot. (Picture New York City or San Francisco, with as many Asians, Pacific Islanders, and Maori as Anglos.) Dunedin, on the other hand, appeared to have about the same genetic mix as the Outer Hebrides. And if the fair complexions weren't enough, the schoolgirls wore tartan kilts, the boys wore tweed jackets or wool sweaters, and a huge statue of Robbie Burns brooded over the main square. 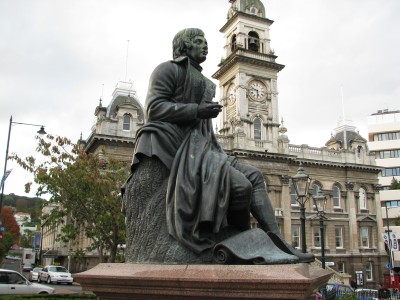 We parked the car and hustled over to the Tourist Information Center. We had scoped out what looked like a good campsite, up a long, rural road near a reservation, but wanted to see what else might be available. The not-so-helpful woman at the counter told us that the only real option was the local Holiday Park, which was "a very good option, you know, because it's right here in town."

Right! Holiday Parks are terrible! New Zealand is a country of breathtaking outdoor splendor. Nonetheless, people traveling in campervans or with tents are often steered towards these ubiquitous, sterile, cramped, Disney-esque "Holiday Parks."
What are they like? Picture a flat church parking lot in the middle of town, partly covered by grass and a handful of trees, with a serpentine gravel road winding hither and yon. Off of this road, numerous stubby driveways are occupied by campervans, plugged into an electricity post, with TV's aglow in the windows. Campfires are typically forbidden, and cooking is instead done in a central building with shared kitchen.

Welcome to the great outdoors!

Shrugging off the suggested Holiday Park, we told the helpful Tourism Attendant that we had hoped to stay near the reservation, as we pointed to our map.

"No, no," she said, looking at us firmly, her face darkening. "That's a Scout Camp, and you're not permitted to go there. The Holiday Park is really the only option."

We left, got hold of a phone book, and made a beeline to the Scouting office. There we met Eckhard, a German transplant to New Zealand. Paul told him of his own Scouting background, and asked if we might be able to pay for use of the campsite.

He gave us keys to the gate and a washroom, and then invited us to the camp warden's cabin for drinks that night. That was the start of a week-long stay in Dunedin, where Eckhard and the camp warden, Brian, took wonderful care of us, leading us on hikes, having us over for dinner, and making us feel generally warmly welcomed in Dunedin. 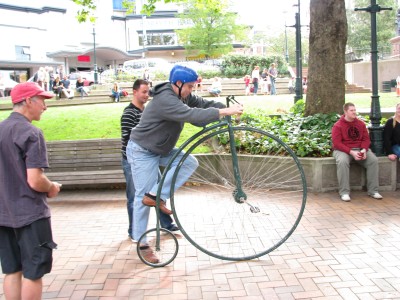 We were fortunate enough to time our visit with Dunedin's annual Fringe Festival, modeled and named after Edinburgh's festival of the arts. The Festival is much like Boston's First Night, except it goes on for two weeks. We saw some really good stuff, and some that was not quite so good. The highlights included a fellow named "Te Radar" who did a whimsical and witty review of New Zealand's noted historical gaffes, and a Cajun/Rockabilly band fronted by three teen age girls who were stunningly good.

From Dunedin we went to Invercargill, at the very Southern tip of New Zealand. We stopped and had lunch at a Turkish restaurant. Surprised that you'd find a Turkish Restaurant in New Zealand? Ha! There are dozens! We could hardly turn a corner in most cities without bumping into "Akbaba's Kebabs" or "Mehmet's Turkish Cuisine."

We stuffed down a big lunch, jumped back in the car, and headed North-west to Fiordland. We'll pick up the remainder of the trip in our next blog.