We'd received conflicting guidance as to whether to visit NZ's Fiordland (not a typo - that's the way NZer's spell it) under crystal clear skies, so as to see Mt. Cook, or in a deluge, to see the waterfalls. We chose deluge. OK, to be honest, the deluge chose us.

It was the correct choice!

We spent a couple of very soggy days camping near an abandoned grass air strip that some hunters had told us about, packed up the rain-soaked tent as we splashed about in puddles, and drove through a pass to get to Milford Sound, on the South Island's West Coast.

The drive through the pass was awesome, with huge waterfalls all about, some of which descended, literally, from the clouds. 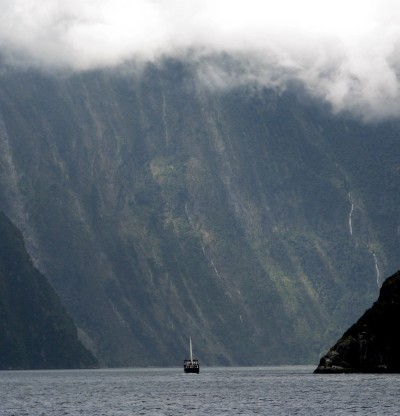 In Milford Sound, we joined an excursion boat that ventured out into the fjord. The boat was mostly empty, because the rain had scared others off. Little did they know! The sun came out about half way through the trip, and we were treated to sunny skies, gushing waterfalls, and colorful rainbows.

About the ferry trip: the boat took us all the way out to where the sound meets the ocean, and the ride began to get bumpy. The chatter and laughter of those on deck stopped, fingers gripped the rail more tightly, and some lay down on the seats, eyes gently closed. "Don't worry," chided the ferry captain over the loud speaker, as the boat began a slow U-turn. "We'll get you out of this stuff, and back to the comfort of the Sound."

As we turned back, the two of us cast a backward glance at the open ocean. It has been months since we've been at sea, and it put things in perspective a bit. Here was this huge ferry that dared only sniff at the ocean's edges, and soon we'd be taking Leander back into it again.

Oh, enough of the melodrama.

We left fiordland, and then stayed in Queenstown for a day, which we found unexpectedly picturesque and quaint. When we were there, the first legitimate snow fell in the higher altitudes. Queenstown is predominantly a ski town, in the image of a Burlington, VT or a Jackson Hole, WY. You could feel the town itself collectively drawing its breath as it readied for ski season. There was bustle excitement in the chilly air.

Next came the highlight of our entire trip, Fox Glacier. Here we felt like we finally found the "real" and rugged NZ for which we'd been yearning. 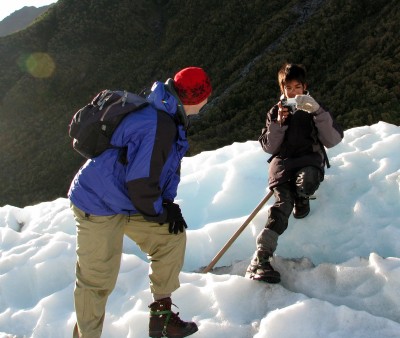 We hiked onto the glacier itself, led by a guide amidst a gaggle of Asian and European tourists. Though it was fun, particularly for Sima, who has a thing for glaciers and volcanoes, it still felt theme-parky.

We spoke to our guide about wanting to see something less packaged.

"Well, there's Mount Fox," he said, pointing up to a mountain and ridge that rose from one side of the glacier. "The weather can be tricky, but if you're lucky the view can be spectacular. And there are some partially sheltered areas where you can pitch a tent up top." Hey, now we're talking!

We looked for more details back in our hotel room. Mount Fox is only a 3,500 foot peak, about the same as one of our favorite climbs in New Hampshire, Mount Chocorua. Unlike Chocorua, however, the Fox trail goes up tightly packed contour lines. It would be a steep climb. We decided to do it, and spent the rest of the evening packing and preparing.

We started up Mount Fox the next day at about Noon. The sign at the trail head read:

Warning: This track has limited formation and steep grades. It is suitable for fit, experienced and properly equipped people. Snow and white out conditions can occur at any time.

Party on Wayne! We were ready. We had reported our route and were laden down like camels with Gortex, wool, and polypropylene clothing, our tent, sleeping bags and pad, food for three meals, lots of drinking water, a first aid kit, propane and a stove, flashlights, and handful of other things. Off we went.

The trail was STEE - EEP! It started out as a good incline, then became like climbing stairs, and then the stairs became like stepping up onto chairs, and then the chairs grew to the height of tables. We were careful and good to ourselves, breaking every twenty minutes to hydrate and put down some carbs. It really was that tough.
We met some others coming down as we climbed. We'd been going for about three hours, and so thought that we were closing in on the top. Just about halfway they reported! Another three hours?! We began to question the reported trip time, although our heavy gear and frequent breaks surely contributed to our slowness.

As we climbed, the clouds moved in, the air grew colder, and visibility began to diminish. Finally, as the first hints of dusk began to appear, we closed on the top.

The early part of the climb had been thick, lush, wet, and green, with dripping trees covered with beards of moss. This had given way to smaller shrub as we climbed, and here, at the top, were only short grass, small bushes, and wild flowers. It had all been covered by a good blanket of snow a couple of days before, which had partially melted, creating a meadow winter wonderland. Think of the closing scene of The Sound of Music as the Von Trapps bound through a pass in the Alps (Hey, where the heck were their supplies?!) 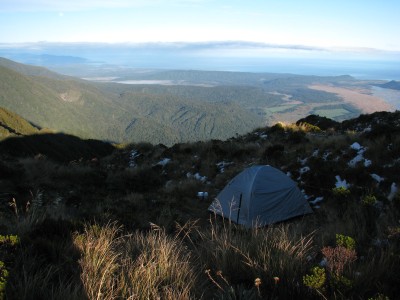 We found a good place to pitch the tent, and set it up as the light died. We unrolled our sleeping bags, fired up the burner, and gathered snow to melt for water. Dinner was soon ready, and never did hot chocolate and noodles taste so good!

We got to bed early, as thick clouds drowned out all light, and made it feel just a little bit colder and more desolate. 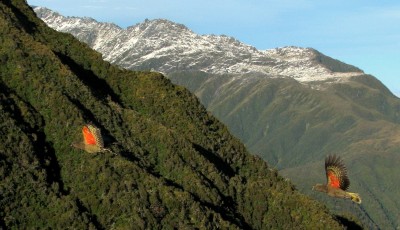 We awoke at first light, and tried to gauge through the tent fabric whether the clouds had lifted. They had! The view was brilliant and spectacular. We dressed and hiked for about two hours along a ridge that connects Mount Fox with the heart of the glacier. It was a wonderful morning. 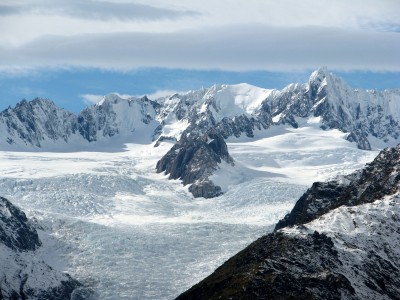 Now all we had to do was get down . . . . It wasn't so bad, and we managed it easily, talking, as we hiked, about how it reminded us of Robertson-family hikes up Chocorua.

We finished our trip with a several-days visit to the area around Marlborough Sound, the heart of NZ's wine country. Too cold for tenting, we spoiled ourselves staying in a cozy hotel. 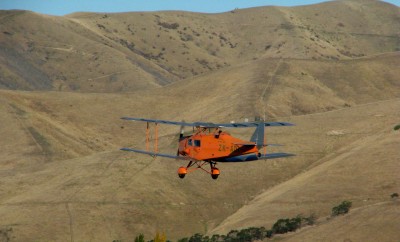 We played golf one day (Sima was good!), saw an air show, and took a long bike ride among the vineyards, sampling wines, figs, walnuts, and dates. It was pleasant, especially for Sima. Add vineyards, with volcanoes and glaciers, to her list of favorite things.

We also met a fellow named Brian Thiel, a brewer at Renaissance Brewery. Renaissance makes a really flash (NZ for "cool" or "good") beer, and he invited us for a personal tour.

We showed up the next morning, and he painstakingly walked us through each step of the brewing process, with each stage being illustrated with long asides about the brewing process, the New Zealand market, his background, and other general pleasantries. We felt like we were interfering with his day, but he couldn't have been happier to show us around, and teach us about how things worked.

And now, back home! Well, that's what Leander feels like to us. After spending a month traveling in a station wagon, alternating between the tent and hotels and motels, Leander, with all its comforts, "space," and our stuff, really is home, mobile as it is.