Sima atop the mast doing repairs

For those following our travels closely (mom?), you'll note that although we spent six months in New Zealand, our travel blogs accounted for only two of them. Time to come clean.

We did visit Auckland a couple of times ("beige" is the best way to describe it), saw Billy Connolly in "concert" (he's been better), went for runs along a dirt path along the waterfront, (Paul's favorite way to end the day) attended yoga classes (Sima), dined at the cruising club (remarkably poor food), hung out with friends we'd made, and saw a little bit of the local countryside.

But mostly we worked on the boat. Lots.

We'd been putting off many projects until New Zealand, partly because it's hard to do anything productive on lush tropical islands, and partly because there are no supplies there anyway. So NZ finally came and we had our work cut out for us.

Below, as much for you as for us, we list what we got done. But may we first say that many of the bare line-items on this list do little to convey the drama involved with some of these projects were? True, a few of them were quite straightforward, and some we paid vendors to do, but most we did by ourselves, and many were downright painful.

Perhaps there are seven stages of boat project-dom (and for those few of you still dreaming of a world cruise after our last "terrible passage blog, this out to finish you off).

1. Shock: &*&#!! Why is our coolant overflow tank filled with oil instead of coolant?!

2. Denial: Oh, it's probably just a little thing, a one-time unexplained error, and when I take the oil out of the top of the overflow tank, everyone will be happy!

3. Confusion: Just why in the name of Bathsheba is there oil in the coolant?! And how do I track it down? Where do I start? How am I going to clean all of the oil out of the coolant throughout the engine?!

4. Discovery: So it turns out that the oil cooler is corroded, and is mixing coolant and oil together, and needs to be removed and replaced.

5. Setbacks: #$%! The heat exchanger is also blown and needs to be replaced? And the water muffler too? Oh no, not you too fuel pump! And the whole area needs to be painted? And I can't get any of these parts in NZ but have to order them from the US? And the fuel pump isn't even manufactured anymore so I need to buy an after-market part, build a special bracket, and re-design the copper fuel pipes to make it fit?! Oh stop it!

7. Shakedown: OK, so let's be smart about this and run the engine for eight hours, and make sure that nothing else breaks - better to fix it here than out to sea. And what do we find? The heat exchanger leaks from end caps and replacement grounding wire. Spray paint has drifted all over bilge and needs to be cleaned up (didn't need to run the engine to see that). The bolt holding solenoid bracket in place stripped and needs to be replaced. Copper fuel lines were twisted in such a way that they prevent the fuel filter from being removed. Holy cow, the fresh water pump is also leeking, and needs to be pulled off and replaced?! And, after a new test run, the raw water pump is also grinding, and turns out to have a shot bearing, and also needs to be replaced?!! And so on. (For those interested in a really complete description of the ways in which this project and others have a tendency to go pear-shaped, give us a ring, but make sure you have lots of time on your calling card.)

See what we mean? The mere description of "replaced oil cooler" doesn't convey the small things, like the desire to hammer the offending part to bits when, after hours of work, we can't figure out why it's busted, nor the jigs we dance when we make it work again.

Take one more example: "Install galley sink pump." That can't be so bad, right? That single entry, however, doesn't reveal the:

• need, ever since we left Massachusetts, to deal with grime and gunk that didn't drain from the poorly designed sink;
• several attempts and failures to fix the problem by installing new PVC pipes, redesigning and replacing the drain and pipes entirely, or removing and replacing a check valve;
• difficulty in taking apart the plumbing because salt water spills onto the battery bank below;
• delight felt when a solution was finally conceived - installing a macerator pump in the bilge to take sink water through the side of the boat, rather than letting it gravity drain into the ocean;
• disappointment at having to tackle two other related projects contemporaneously (install and wire second bilge pump and plumb an air vent for fuel tank) because they involve similar problems, parts, and areas of the boat;
• setbacks experienced, such as discovering that the shelf on which the pumps would rest was rotting and need to be replaced, or that the check valve in one of the fuel lines had been installed upside down and was frozen in an open position; nor the
• pure bliss we felt when the project was completed and both new pumps and the vent line worked like a charm.

The dozens of projects like this that we've completed in New Zealand remind us that "sailing" around world has been as much about being an electrician, seamstress, computer technician, plumber, carpenter, rigger, engine mechanic, and such, as it has been about being a sailor.

Without further ado (could there be any more?!), here's a list of what got done in those missing four months:

• Repaired wiring on three engine-room lights (now we can see the new paint job!)
• Used a silver chloride half-cell to determine the need to electrically bond all of boat's thru-hull fixtures, propeller, and shaft.
• Rebooted crashed computer and re-installed all programs and data (a miserable, four-day project that had Sima speaking with Microsoft and Lenovo representatives from the four corners of the world, her head sagging in utter frustration on the non-functioning keyboard)
• Installed DVX software on computer to enable watching of movies directly from hard drive
• Wired the two new pumps and their switches
• Purchased and installed speakers for watching video (these rock - watched "Transformers" and thought that the barking dog was on deck)
• Reinstalled electrical motor in vacuum cleaner after obtaining parts from the U.S. (but not before we made an electrical burn in the mast when we had the bright idea of hanging the old motor from the ceiling to test fire it - the thing flew around like a helicopter! Help help!!)
• Repaired old AC step-down transformer that we borrowed from a friend and broke, and then purchased and wired our own
• Repaired foredeck light, located half-way up the mast (did this twice, and it's already broken again)
• Re-wired propane solenoid, and installed new propane pressure gauge, solenoid switch, and regulator
• Checked voltages and topped off fluids in house and starter batteries
• Rebuilt auto pilot motor and pump (but this leaked again on way to Vanuatu)
• Laid wiring for DC electrical plug to be installed in cockpit
• Repaired in-mast DC electrical plug
• Repaired light fixture over galley
• Repaired handheld VHF radio battery insert
• Installed electronic weather monitoring station
• Replaced and re-wired bilge pump float switch
• Installed interior DC plug near stereo for IPod use
• Repaired engine alarms

• Replaced rubber protective cap atop roller furling jib at the mast top (Sima did this, riding high up the mast in the bosun's chair with a big grin on her face)
• Removed and re-caulked leaking chain plate at transom
• Re-sealed leaky mast boot
• Rebuilt and re-rigged spinnaker car
• Fabricated new mast cover for Stack Pack (our sail stowing system)
• Changed reefing system
• Replaced gooseneck joint
• Replaced spinnaker halyard
• Installed remainder of t-track for storm try sail, replaced ill-fitting machine screws on the track that had been installed earlier, and installed new slides on the storm sail (unbelievably, the sail maker had shipped us from the US t-track and sail slides that were incompatible - but to their credit, they shipped new slides when I called the error to their attention)
• Drilled drain holes in spinnaker boom
• Inspected and sealed leaks in mast fittings
• Inspected and tuned rigging
• Replaced cleat for attachment of main sail Cunningham and replaced line
• Identified failed fitting on shroud near the spreaders and replaced shroud, and loosened all lower shrouds to insert washers in clevis pins at the upper tangs, which were too long and causing bend at fittings (it was frustrating trying to find out why the shroud had failed - in the end, we determined that it wasn't hit by lightening, but had instead had been installed improperly)
• Repaired set pins protruding from roller furling jib foil
• Reinstalled lifeline gate
• Repaired loose stainless steel furling bowl on roller furling jib
• Performed complete overhaul of main sail and jib
• Repaired failed zipper and torn reefing line cutouts on main sail Stack Pack
• Repaired broken preventer shackle 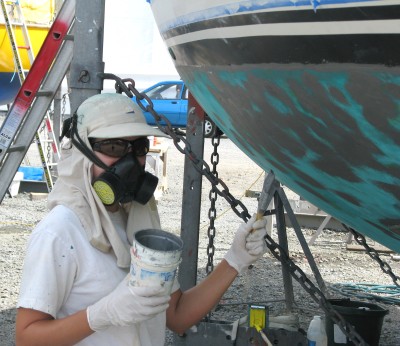 Sima applying primer to the bottom

• Stripped, primed, and recoated bottom with three coats of anti-fouling paint (this is always a dirty, multi-day, and hard project)
• Removed old boot stripe and water line, painted area with barrier coat, raised the water line, and re-painted new boot stripe
• Washed and waxed deck
• Repaired snaps on dodger and on bimini
• Installed stainless steel grab-bar on dodger
• Replaced rusting, non-marine-grade washer on dorade protector
• Repaired flag holder
• Made Sunbrella cover fabricated new retaining straps, attached new u-bolts, and made non-skid pads for deck-mounted water and fuel jugs
• Removed, re-caulked, and reinstalled turtle cover for cabin hatch cover
• Built splash covers for autopilot and propane solenoid fittings
• Repaired cracked cleat on starboard side
• Made Sunbrella covers for winches
• Cleaned and compounded Lexan hatch and portlight windows
• Purchased and installed new 60 pound Manson Supreme Anchor
• Secured life raft and a new horseshoe buoy to rail, and connected rail to aft arch, with permanent metal u-clamps
• Removed, serviced, and re-bedded aft winch on port side
• Compounded and buffed topsides
• Replaced broken boat hook and clasps that held it in place
• Stripped and sanded, and then applied nine coats of varnish (sanding between each coat) to teak toe rail, rub rail, eyebrows, hand rails, and transom ladder stairs (another multi-week task -- we're almost done!)
• Stripped, wire brushed, lubed, sanded, and applied "Prop Speed" to Max Prop
• Removed all seacocks, brushed and sanded them, applied auto valve lapping compound, re-lubricated, and reinstalled
• Cut into and inspected glassed-in centerboard sheaves, discovered that they'd rotted away, replaced with new sheaves, and re-glassed to enclose (Note to first-time boat owners: this is NOT a project that should be undertaken at sea with an electric saws-all as the sheave is below the waterline and cutting into it will allow copious amounts of seawater to rush into the boat. Not that we'd know....)
• Installed new centerboard cable, repaired winch, and redesigned winch handle to fit small space 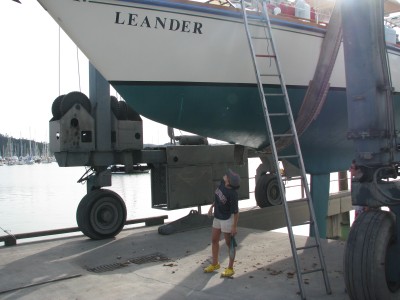 Leander, just before she goes back in the water

The engine, before, during, and after being painted