Slightly more wind than was comfortable, so indicated the forecast. But, if we did not go today then too little wind to sail downwind effectively would be available for the next few days. Our trip from Morro Bay towards San Miguel, one of the Northern Channel Islands, commenced with no wind, almost a calm, apart from the residual swell bouncing around once outside the harbour entrance walls. Within an hour the wind started to fill in from the north-west; another hour and we bowled along before 18 knots of breeze. Running downwind with a poled out genoa and full mainsail, Spruce leapt across the building waves: Goldilocks conditions. Our wind vane steering gear exquisitely manoeuvred us across white-horses. Then the forecast fulfilled its prophecy and quickly built to 25, gusting to 30-knots. Sails reefed, we raced past our half way marker. A number of production platforms servicing California's offshore oil business appeared from over the horizon. The first came as we rounded Point Arguello, another three were well offshore from Point Conception.
The glorious sunshine made this a less arduous passage than similar conditions in Alaska last summer. However, for a latitude of 35-degrees north the air temperature remains cool. Locals have advised us that once south of Cape Conception the weather appreciably warms up, a step change they claim. We eagerly await that to happen.
The final 30-miles crossing the Santa Barbara Channel went rapidly, until we reduced sail further as dusk fell. A current of ¾ Knot punched into a stiff north-westerly wind, seas shortened, wavs became steeper, the ride delivered a bouncier and wetter experience. Eventually, we eased into the anchorage at Cuyler Harbor around 21:30, fourteen and half hours since leaving Morro Bay, a respectable pace for an 88-mile passage. Strong winds continued to whistle off the cliffs but they would be blown out by morning. A modest swell sent a soporific scend into the bay to finish an exciting day's sail.
More
Comments
Newer Older
Contents 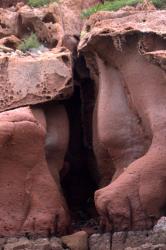