Day 8�- At 23:31utc - Distance logged:907M �- Distance to Go: 2,153M - Ave Speed: 5.1kn
Many visitors come by in the ocean, some we see and others not. This fellow, a Brown Booby, appeared to have a damaged wing. He stayed for several hours and was reluctant to depart. As his excretions were falling overboard we let him be... for a while...when he squawked to passing brethren, who immediately attempted landings on the radar pole, wind-generator and davits the time had come to say goodbye. The thought of clearing up after several of these fishy smelling creatures had spent a night aboard was not appealing. Other avians include petrels, Nazca Boobies, Red Footed Boobies, a type of Shearwater. A semi-avian visitor is, of course, many hurried shoals of flying-fish going airborne when a predator chases below. They initially look like a flock of sparkling birds gliding expertly between wavelets on a shiny sea.
During the night, and these are dark nights before the slender crescent of the waning moon hoists herself above the horizon. Phosphorescence in our wake is a delight to watch. Turbulent roiling surge astern stimulates creatures who generate bio-luminescence. Similarly when fish, dolphins and whales pay a visit they are no longer invisible. The luminescent creatures give their game away. Two night's ago a group of smaller whales stayed off our stern for a few hours. Initially, our attention was drawn to the huffing and puffing as they surfaced for breath. Upon looking out, the phosphorescent trails were stunning. Taking turns they moved into our glowing wake for a short moment before yielding to a partner. If only it was possible to film such low light intensities. Maybe it is possible with special equipment. For our limited capabilities, particularly with constant motion, we shall just have to retain fond memories.
More
Comments
Newer Older
Contents 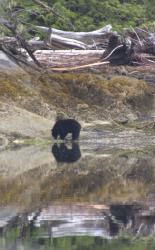