The following morning we set off to the north-west. As the peaks of Montes Duff and Mokotu slipped slowly below the horizon astern our thoughts turned ahead towards the Tuamotus.
Once named the Dangerous Archipelago, the Tuamotus are a spread out group of atolls: lagoons surrounded by a protective reef. The once mountainous land encircled by the reef has eroded and sunk into the Earth's mantle leaving only the constantly growing coral surrounding bommie strewn lagoons. The former name was well earned, particulalry in the days of inaccurate charting. Strong currents abound. Grey cloudy skies for several days at a time meant mariners reliant upon heavenly bodies for a position might be astray. Low reefs, the highest object a coconut tree and visual sightings sometimes came too late to take avoiding action. When the oceanic abyss rises steeply onto the reef a ship found the water too deep to anchor before she was being battered by waves as she lay against the hard coral.
Modern navigational aids make all this less of a risk but caution and remaining alert is still required when navigating these waters. Particularly when using wind-vane steering to control the course.
More
Comments
Newer Older
Contents 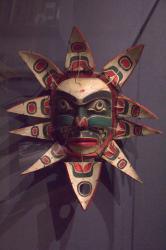