Behind the wet plateau lies a tumbled region of broken coral. Normally this remains above sea level. No doubt thrown there by one of the more major storms, perhaps an occasional cyclone that wreaked havoc on these shores. The older deposits are dark grey. The more recently exposed are still an intensely off-white shade. When one walks across the coral rubble a brittle noise emanates from underfoot as shards clatter against each other. The sound is rather like the hollow clinking of china tea cups.
Inevitably, some pieces of plastic can also be seen. Fishing debris predominates, but also pieces of synthetic containers and bottles. Old net irradiated by solar-ultra-violet crumbles to dust when touched: a source of micro-plastics so castigated in scientific publications. We can no longer see the degraded material, but it remains in the environment, causing unknown harm to ecosystems, particularly to inhabitants at the top of food chains, where concentrations become intensified.
The photo shows Sue with a friend of old, Michelle, from s/y Theleme. We met her and husband Richard in Amanu after last sharing time together back in 2015 while in Tasmania, Southern Australia. After that encounter, we headed off towards Asia and they came back into the South Pacific. Behind the happily reunited pair, the waves continue to crash on the outer reef. Underfoot can be seen the wide expanse scattered with broken coral and a few embryonic shrubs struggling to gain hold in the arid, salty ground.
More
Comments
Newer Older
Contents 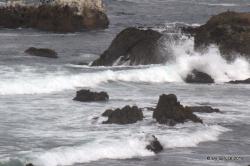 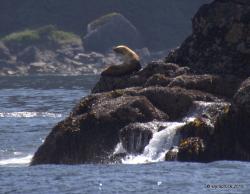