The larger islands that are far-flung from the Society Islands, normally have one or two sizeable villages. To give an idea, the Marquises have five larger islands. The entire population is approximately 9,400 souls. Although we do read that French Polynesia has 80,000 Marquisians, most live and work in Tahiti and the Society Islands. The Gambiers Archipelago, a thousand miles south of us, has less than 2,000 residents. The population of a larger village is typically less than a thousand, often much smaller. A number of shops can be found, supplied by regular vessels. Shops (stores) carry an amount of common goods, often each one also has a few things that only they specialise in.
Here, in Ua Pou, the two supply ships, Aranui-V and Taporo-IX, each arrive from Tahiti every 3-weeks or so. This is the heartbeat of tangible connection with wider French Polynesia. A day of frenetic activity abounds on the quay. In some islands the ship anchors off and deliveries are brought in using small barges. The ships are self contained operations. They carry barges, cranes, fork-lift trucks and enough crew to operate the equipment. Before the ship docks, a boat is lowered by crane, crewmembers rush lines ashore to tether the ship ready for action. First off, a cubby-office is craned onto the dock, where people exchange documents. Containers are lifted ashore, a bowser is brought alongside to fill with diesel fuel for the local power station. A gaggle of pick-up trucks collect goods ordered, building materials are stacked along the quay ready for collection during the coming days. A gleaming new tractor is lowered to a beaming new owner. Queues of people on foot clutch delivery paperwork to retrieve their parcels from containers being unpacked ashore. As the day ends, containers are lifted back aboard and the arrival process reversed as the ship returns to sea to repeat the whole saga at the next island. (Photo shows the Taporo bringing essential supplies to Ua Pou - LPG & fuel being off-loaded)
More
Comments
Newer Older
Contents 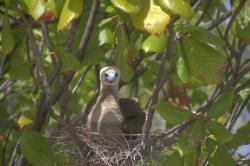