Compared with our previous visit to French Polynesia this is a more sedate sojourn. In 2013 a little more than 3-months took us to all the islands within the Marquises, three of the Tuamotus and all the Society Islands. During the year of that visit we sailed almost 8,000 miles from the Galapagos and on to New Zealand in a period of seven-months. Since we arrived in the Gambiers from Mexico we have spent that same duration in only a further five islands. There has been no other countries properly open for cruising yachts to enter due to the Covid crisis. French Polynesia have been very accommodating to our plight. Still no reply has been received from our application to enter New Zealand, we feel they have treated us shabbily. Fine if they do not want visitors, that is their prerogative; but to put people through an onerous process and then not to have the courtesy to reply, in spite of acknowledging they are dealing with one's application, is plainly rude. In any case, after waiting 85-days for no answer, it is now too late to sail the 3,200-miles into the cyclone prone region of the western Pacific Ocean.
Meanwhile the beauty of Fatu Hiva occupied our attention for a couple weeks. Hanavave is the name of the village nestled into a volcanic landscape behind Baie des Vierges. Dark forbidding buttresses frown upon the narrow roadway leading between houses. A bridge spans a waterway, the partly dry riverbed green with lush vegetation, there are clear indications that tremendous floods sometimes sweep all before the deluge. Where the river runs into the bay a shallow plateau of submerged debris interspersed with sizeable boulders hint at the awesome power of moving water.
Beyond the village a roadway meanders upwards, snaking around contours climbing onto the high interior. A concrete surface laid during the ascent resists erosion, in the hinterland a dirt packed road wanders seventeen kilometres to the larger village of Omoa to the south. In 2013 we hiked this route and took a ride home in a local craft. This visit we limited our trek to the top of the rise and enjoyed the views from on high.
More
Comments
28 October 2020
Sue & Andy Warman The roadside is liberally adorned with mango trees, some sporting luscious ripe fruit. Having reached the limit of our ascent, in the early morning sunshine, it was most refreshing and thirst quenching to sample the local fare. Two other boats we met when in the Gambiers were also companions here in Fatu Hiva. Immediately to the right of Sue in the photo are Minke and Jaap (s/y Eastern Stream) from the northern Netherland town of Groningen. To the right of them are Jacques and Elenise (s/y Kalea) originally from Switzerland and Peru but more recently hailing from Seattle and Hawaii.
The verdant foliage of a banana tree plantation offers some shade from the intense afternoon sun, beating mercilessly down at a latitude only 10 degrees south of the equator. Bananas from here are transported aboard the MV Aranui V to Tahiti. This is a new crop, in 2013 copra (coconut “meat”) was the main island export. Occasionally, birds are espied in the palm trees: small pigeons sporting shiny green plumage. Chirps of geckos can be heard in foliage, minute lizards scurry across the trail; these volcanic islands have sparse fauna, being so far from major continental land-masses, and having originally sprung forth from the ocean floor. Many of the species seen were brought by humans. Some intentionally and others stowed away on Polynesian Wacas or European warships, traders and whalers.
The migration of Polynesians is generally accepted as having radiated out from Asia and then progressed over many centuries to The Marquesas. From here, migrants then went to Easter Island (Rapa Nui), Hawaiian islands and to New Zealand. Probably many more perished in the vast wastes of the south Pacific going east from French Polynesia, but the true history may only exist in fragments of an oral tradition that was often persecuted by early missionaries.
More
Comments
28 October 2020
Sue & Andy Warman Some of the locals also turn their hand to carving and making tapa-cloth to serve the tourist industry. Most tourists fly into Papeete, on Tahiti 750 miles to the south-west. From there most move out to resorts in the nearby Societies: Moorea and Bora-Bora, or perhaps the nearer northern Tuamotu isands: Rangiroa and Fakarava. Few venture the distance east to the Marquises. Most of the carved artefacts are sent to Tahiti where agents and tourist shops sell traditional paddles, bowls, Polynesian weapons and models into the main throng of visitors. A major market for Simon (photo) and his contemporaries is held in Tahiti during November. The covid pandemic has had such a marked effect on tourist numbers visiting French Polynesia this year that they will not go to the expense of attending the event this summer as anticipated sales will be poor; most vendors are replete with stock from the previous event six-months earlier.
More
Comments
28 October 2020
Sue & Andy Warman On northwards 45-miles to the island of Hiva Oa and her main town of Atuona, the administrative centre for the Eastern Marquises. Many visible changes have come about in the past seven years. The most notable are more numerous large US style pick-up trucks thundering about. Has this trend been driven by manufacturers offloading excess stock into remote places, by large bodied Polynesians being unable to squeeze into smaller vehicles more typical of mainland France, or the usual status symbology? Perhaps a little of all causes. In any case, the importation of fuel must have increased dramatically. New residences have appeared on hills around the port lagoon, a small harbour wall has been erected and a quay against which the Aranui and other supply ships can tie alongside. The swell leaking into the tiny harbour has probably a worse effect nowadays. Although local craft, Med-moored behind the wall, are sheltered the waves seem to reflect off cliffs and dock concrete-work, bouncing around the lagoon in a disorganised manner. Weed and growth attaches to the hull rapidly, perhaps derived from the fresh water river flowing into the harbour, or maybe a reduced flushing effect due to the harbour wall limitation on water circulation.
The local bank offers improved ATM facilities, several machines within an air-conditioned lobby. The mini-supermarkets and hardware store seem to be better stocked than we remember. In all, a good place for supplies apart from the town being situated a couple kilometres from the harbour. If a large amount of goods are purchased then a taxi will be needed. Certainly the supermarket opposite the Post Office will provide a gratis ride back to the dock for a substantial buy.
Compared with the low lying Tuamotus the Marquises provide more stimulating vistas of mountains and relief. Clouds form over hilltops, billowing and roiling in strong trade winds, compressed over the obstructions. Textures and shades of a variety of trees and bushes form a pleasing view. Coarse crags of igneous rock, cinder and conglomerate relate a story of volcanic creation. Shapes seen in the cliff profiles remind one of tikis and the moas of Easter Island, maybe there is a link. The sole challenge presented by a number of fine anchorages in the Marquises is the ever present swell. Unlike the Tuamotus and Societies, an absence of fringing reefs leaves an anchored vessel subject to the motion of the ocean.
More
Comments

Return to the Ocean so Blue Spruce set off from Amanu on 14th September. A whoosh of a 5-knot current and swirling eddies swept us through the reef passage and out of the beautiful lagoon we had enjoyed for 4-weeks. North lies the Marquises Archipelago and her most south-eastern island, Fatu Hiva.
The Marquises are situated some 3000-miles from the continent of the Americas. They are at the north-eastern (upwind) limit of French Polynesia. We last stopped there in 2013 after a long passage from the Galapagos Islands in April.
Faintly ahead in the photo can be seen our destination. The stunning cliffs of Fatu Hiva climb slowly above the horizon as we briskly sail on a close reach towards the conclusion of a 460-mile boisterous passage from the Dangerous Archipelago, The Tuamotus.
Winds had occasionally been in the high twenties knots but more usually around 19-24knots. We had bashed into trade wind heaped seas close hauled for some of the time. Fortunately, that had eased to close reaching for the remainder. An average foul current of 0.3 knots had plagued our progress for most of the journey, sometimes at as much as a knot, infrequently a slight fair current, less than significant but an extra 3 or 4-hours sailing to compensate over the whole 78-hour journey.
More
Comments
Older
Contents 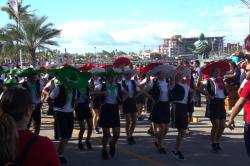 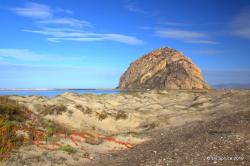 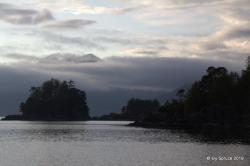 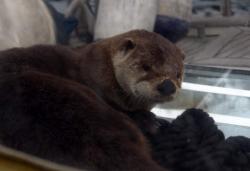