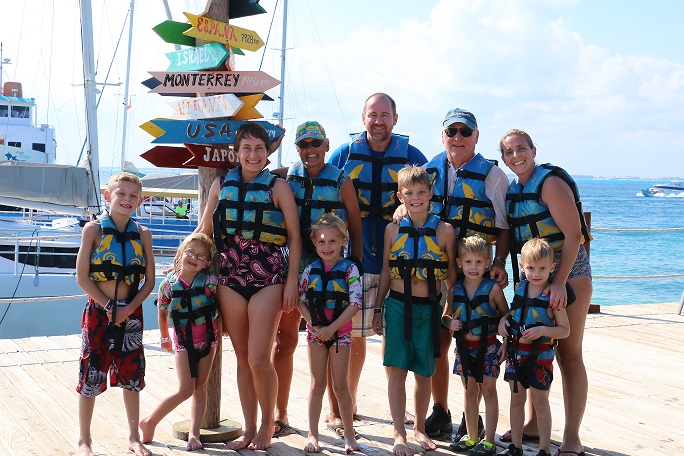 Having spent just over a month at Isla Mujeres Alice and I feel we explored pretty much what the island offered. We're really not into diving and for snorkeling we spent time with our grand kids helping them explore the close in rock areas looking for small fish. More serious snorkeling for us will be further down into Belize and I'm looking forward to exploring many of the small less populated Cays with white sandy beaches, local restaurants and bars.

Getting Puerto Morelos was a power boat ride. No wind to speak of and since we hadn't run the engine for a month it was a good opportunity to also run the watermaker, set the autopilot kick back and read as LB did all the work. There is a lot of current flowing along this section of the Mexican coastline. This is the beginning of the Gulf Stream as water flows northward into the Gulf of Mexico, does a clockwise loop and turns southward toward Cuba before turning once again easterly to pass through the Straits of Florida. So northward flowing currents of 2 to 4 knots are what we experienced as we left Isla Mujeres so I navigated LB toward the mainland staying close to the 60 foot line where we occasionally found counter currents actually helping us along.

The marina at Puerto Morelos is part of the El Cid Resort and what we discovered was quite a surprise and a stark contrast from Marina Paraiso at Isla Mujeres. From a very rustic, poorly maintained marina with an adjoining hotel with nice pools, restaurants and bars to what we would rate as a 5 star resort complex. Wow! and it was all available to us. This is the Mexican mainland so good by to golf carts buzzing around, taxis everywhere and the locals on scooters. Tour buses, large groups of people on company sponsored vacations, spas, pools, beaches, pool bars, massages on the beach and more. We were two senior citizens in a candy store.

Our plan was to start touring the mainland so we went into town looking for places to visit and for deals. We found a small tour kiosk and jumped into conversations about sites and costs. Rio Secreto, south of Morelos seemed interesting. It offered a cave tour including swimming/walking in the underground river system, repelling into a cave, another tour through a dry cave, discussions about Mayan life and finally a buffet. So what was the cost? Too much we thought, so we thought we'd explore more and guess what. "Wait don't go I can give you a deal"..That started a negotiation that got us the Plus package at the lessor package price, plus they would pick us up and drop us off at the marina saving us $250 Pesos in taxis, so out with the credit cad and we were in. 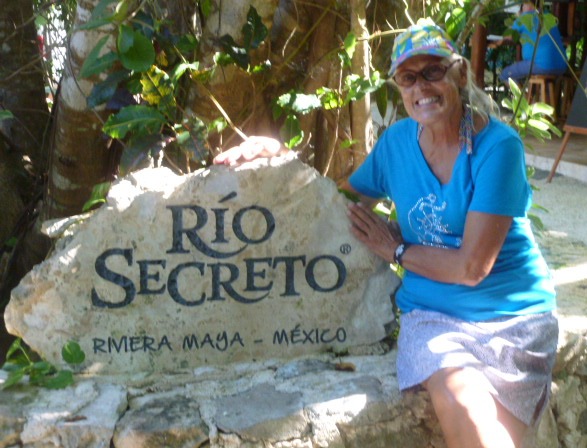 Lady Alice adds her beauty to the local

It was one of the best organized sites we've visited including the USA. After a 7 kilometer dirt road ride into the jungle, we were arranged into small groups and led off by our guide Julian. We had made the right decision, it was amazing. Fit with special non-slip water socks, wet suit, life jacket, helmet with a light off we went down into the cave system. Our first introduction to the water was a bit of an anxious moment, it was cooler than expected and we all had to overcome the sense of slipping and falling, but once in all well good. For about 90 minutes we walked, swam, crawled though one underground room to another each offering spectacular formations of stalagmites and stalactites. Our guide was superb enhancing this unique experience.

Then back out it was time to do some repelling down 45 - 50 feet into another cave. Picture a round hole in the ground, bordered by a 2 -3 foot stone wall three quarters around, like a well. There was a dirt area where each of us was attached to the repelling gear and dropped into the hole. It was difficult to see the bottom and taking the first step into space reminded me of my first and only sky-diving experience. You have to have faith in the equipment, ropes, support structures and crew. It was Alice's turn. On with the repelling gear, hook her up to the rope, step forward Alice, sit and set out into the middle of the hole. At first she said she couldn't do it. I was right behind her encouraging her and with assistance from the crew she slowly inched out to the edge, did not look down, sat letting the rope and her harness take the load and SHE WAS OFF, downward very slowly to the applause of me and the others yet to try. Nice job Alice. Next me. Hook me up, recall that first moment in the plane, sit back, step out and down I went. Not to bad for the two oldest members of the group.
More
Comments
Newer Older
Contents