The problem on the second day was a power outage, a nearby transformer quit and had to be replaced. I had little to do so I watched the operation. First, hand dig a hole for a new pole, four guys with a pulley system lift the new pole up and into the hole. Put some rocks around the pole and drive them into the ground with a hammer and pry bar. Then one worker climbed up the pole using foot straps and set a pulley at the top of the pole to raise the new transformer. Meanwhile another guy climbed a pole out by the street that had an unbelievable amount of wires all over the place; spaghetti at high voltage. 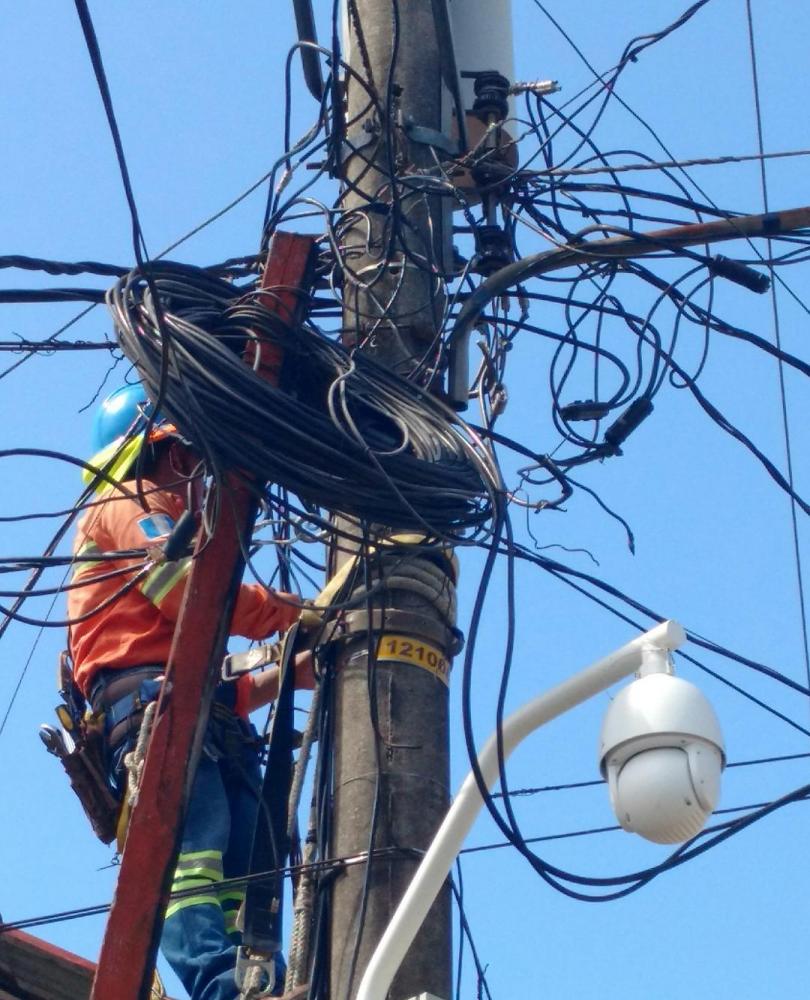 Does anyone have a wiring diagram?

He used a fiberglass pole to disconnect the damaged transformer and sort out the mess of wires. Back at the other pole the guy was using a hand auger to run holes through the pole to mount the new transformer. Now it's 1300 and we've been waiting since 0900 this morning.

Up goes the transformer, it gets bolted into place and then the wiring process begins. While these two guys are working up the poles there are at least four others standing around, just like me. The operation was really something to watch. I think of hydraulic boom lifts, power augers, power drills and stuff like that back home. But by 1500 they finished the job and the power was back on at Customs, Hurray!!

I gave my papers to the Customs officer who then spent the next 60 minutes watching his computer and occasionally typing, just to eventually print two pages. Now it's 1600 and we still don't have our final clearance and we need at least and hour and a half to go up river to the same spot we stayed the previous evening. Talk about anxiety, after crossing the bar, bouncing LB on the bottom, anchoring in 15 to 20 winds broadside, attempting clearance twice, traveling up an unknown to us river just before dark to find a safe place to park LB, I was through with the Guatemala check-in folks and just wanted to get Alice, me and LB somewhere else, fast. Long story shortened, we boogied up the river and anchored next to a tributary called Rio Tatin. Up with the dinghy, everything inside, lights on and it's cocktail time on LB.

The next morning we decide to go exploring up the Rio Tatin and as luck, Lucky Bird, might have it the whole issue with the check in turned out to be a blessing in disguise. As we dinghied up this little stream, we passed Mayan houses with their thatched roofs, women washing their clothes in the river and beating them against the rocks, we passed small lodges and at the end we came upon Ak' Tenamit. Here we went ashore and found a whole community of houses, a primitive restaurant, a school, nature trails all part of an Eco study community. We were lead by a Spanish only speaking young lady to a waterfall where we saw local women and their kids filling jugs with water from the falls. No filtered water here, just good ole Mother Nature. They loaded their jugs into their small canoes and paddled back down the river. On the way back to LB we stopped at one of the lodges and found a large group of young adults, doing what I refer to a team building drills. Out in the jungle, here we find 25 to 30 people at this lodge, it must have been similar to a corporate retreat. Amazing what we find when we wander off the beaten path.

So here we are at RAM marina in Rio Dulce, Fronteras, Guatemala. Several of the boats we met in Placencia, Belize are here. There is a community of cruisers here and each morning there is a Cruisers Net broadcast on channel 68 VHF. We'll tune in tomorrow.

This afternoon we hopped into the dinghy and took a tour scoping out the restaurants and the spots where cruiser dinghies are welcomed. We also met a fellow who can make covers for our dinghy and the motor. They are called chaps and are necessary to protect the dinghy hypolon fabric from the UV.

I'd say this was a good day, coffee at 0700, another cup at 0800 and then a two hour run from Texan Bay to Rio Dulce. The only issue being our depth sounder doesn't do well sounding in mud so most of the way it read 0.00 feet. Only a slight irritation.
More
Comments
Newer Older
Contents