03 July 2008 | Los Angeles
Sam
The adventure that was bringing her down from Sausalito to MDR... after almost a week of refitting, upgrading and stocking up on supplies and equipment, which included sail repairs, safety equipment upgrade and propane tank retrofit. We were pretty much set to go on wednesday but the weather was calling for a Gale from the NW and all agreed that we should postpone a day and try for Thursday morning.
Thursday morning arrived early...Mariah and Tom showed up with Marc our expert in all things nautical and edible...amongst other things. We loosed the lines and motored away from Sausalito and toward the Gate.
Wind on the nose we motored 8 miles out the channel, skirting the Potatoe Patch...watching the containerships, pilot boat and tugs transit back and forth. Looking forward to the left turn and the oft spoke of NW winds and ralaxing and drinking a beer...we made our turn...no wind big swell...felt kinda barfy...especially down below...we continued to motor...and motor...and motor...until we started figuring out that we might be motoring for quite a while. As night fell and the motor ran...and the nausea waned...we realized that we would need to refuel before we ventured down past point Sur...so Monterey it was on the nose.

Tom and Marc took the watch til 1 and I took over after that...my first landfall in the dark...thanks to the little Garmin Colorado I was able to keep oriented...although nervously...and slowed down to time our landfall for daybreak. I woke Marc and Tom at about 5:30 am and we motored in past the increadibly noisy surprisingly large population of Sea Lions. Of course the fuel dock didn't open until 8...and once refuel and another jerry can was purchased alone with a few odds and ends from the chandlery, we were off again.
Oily glassy conditions...without a hint of wind as we rounded the point and motored past Pebble Beach, the wind started to slowly pick up and sails were raised. Wait! This isn't the wind we were promised...it was dead on the nose...out of the south...WTF! Again the weather was wrong...for the 2nd day in a row...did I mention that forcast was for 25kts of wind out of the NW the frst day. Well we decided to turn the motor off and sail finally...except that we were headed...almost due west. Then the wind started to pick up...and we started to heel...and then the wind picked up more...we reefed the main...then the genoa...still uncomfortable with winds gusting to maybe 30kts...at least that's what Tom and I figured...we put in the 2nd reef in the Main. Down below Marc decided to cool...heeled over like 50 degrees...Tom and I shit bricks aboved...slamming into waves and depowering when the gusts hit us at the top of the swells and put the rail deep in the water. At least we had our sea legs and weren't chumming the waters.
Dinner was served...and holy shit...our "consultant" was a chef as well...even in such extreme conditions...killer! Curried chicken in a wine sauce and rice...damn! Nothing warms the soul like a hot meal in a freezing friggin' gale or something like that...to paraphrase Marc.
As the day wore on and we moved farther from the coast...sun began to set and the winds died. Back came on the mechanical sail made by yanmar. To be continued...

if you guys want to check out more pics.

The set sail date is June 23 approx. And Tom and (Fronch) are going to the boat today to look things over and maybe go for a test sail...I will hopefully be heading up on the 21st to do the necessary preperations for a departure on monday. More to come as the date draws near.
Comments So...freaking out, we contemplated pulling her out of her slip for the first time. Wind was up, I was worried and about that time a solo skipper in a 45 ft Benneteau pushes out of the slip...chatting with a friend on the dock...without a care in the world...hardly paying attention...walks back to the helm...spins the wheel over and puts the engine in gear. Super cool. So I figured if he can do it...so can Tom and I.

We pulled out and sailed without event except the need to put a reef in the main. When we turned around and headed back to Sausalito I tried to start the diesel...it wouldn't run...crank but no run. We mucked around a bit before finally calling vessel assist. After a brief scare wrapping the jib around the forestay we hooked up with vessel assist and got back in the slip. Troubled I lay in bed trying to figure out what was wrong with the diesel...it wasn't until early the next morning that I realized what had happened, or better yet...what hadn't. The kill switch...never got unswitched...or pushed back in. After racing down to the boat to see it that was in fact the problem I was rewarded by the engine starting right up as if the day before never happened.
Comments So I'm posting because I see what others have done and I'd like to document this phase of my life.

I just returned from a trip to have the vessel I am purchasing surveyed in Sausalito. Everything was good and everything is moving along...funds are in the process of transfer, so...in essence it's mine.

I'm nervous, excited, and a little in shock...but this is the realization of many years of dreaming come true.

So, lots on my mind as I figure out a way to get "Manhattan Transfer" down here to LA. 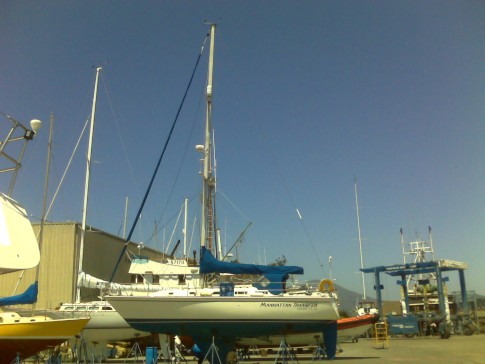