We were invited by our friend, Mike Perrin, who we met when he was anchored next to us in Luperon, to join his friends, Peter and Louise, aboard their motor sailor, Passagemaker, to take a little day cruise along the west coast of Trinidad. Having just arrived here a few days ago it was a great opportunity to see something besides the very busy and industrial harbor of Chaguaramas and make some new friends.

Also joining us were Joe and Annie from s/v Little Wing, Mitch and Mel from s/v Private Dancer, and Mike's lovely Trini friend May. The breeze was warm as we motored along the coast taking in the sights, savoring the food and refreshments, and enjoying each other's company. 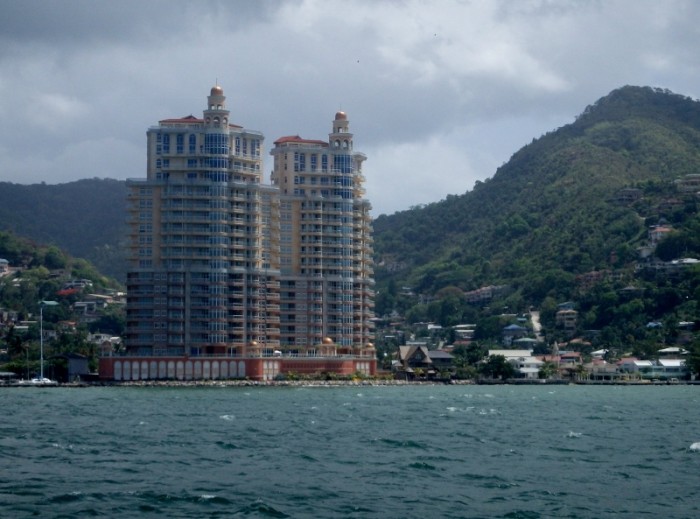 On the return trip we stopped and dropped the hook in Scotland Bay, a cove surrounded by high hills, where Louise quickly dropped two kayaks into the water. Jeff and I went out for a little paddle around and came across some locals swinging into the water from a long, knotted rope hung high in a tree along the bank. We watched them take turns swinging out across the water and plunging in for a few minutes before they invited us to take a try at it. The only scary thing is thinking about it because once you're launched the rope reaches its apex where you let go and fall into the water in about a second.


Fun was had by all and we returned to Passagemaker so the other folks aboard could go for a paddle.
As we were leaving Scotland Bay at least eight dolphins came to swim along the bow wake, staying with us for quite some time. Many more were spotted cavorting in the water a ways in front of us and then Jeff spotted the prize of the day. A pink dolphin surfacing in the midst of another pod swimming off the port side of Passagemaker. Truly magical.
Comments
Newer Older
Contents