On our way to Bahia Honda for tonight

10 April 2013
Carole
We stayed in Isla Naranja last night, we could hear the birds, the howler monkey and a type of cricket called "ceda" not sure if this is the correct spelling. It was a little rolly but not bad, we can't wait to get to Golfito and then get home. Today we are on our way to Bahia Honda, the seas are calm and no wind to speak of.
Comments

An early morning and its dark!!

08 April 2013
Carole
We are up and awake at 2 am this morning and ready to pull anchor and head off. The winds have subsided as predicted on passage weather which is nice but it is very dark with just a sliver of a moon. We had a following sea and little wind so we ended up motoring. We should pass by Punta Mala at around 12 noon and then onto Banao before dark. There were a couple of more boats out there that we could see which was kinda nice.
Comments

07 April 2013
Carole
We left La Playita at about 9:30am headed for Otoque which is a small island about 20 nautical miles away, this will make our journey to Banao that much shorter the next day.
We arrived at Otoque in the afternoon, it has an open bay but no fetch to speak of at this time of year. We anchored where the Sarana guide has the waypoint in 50 ft of water. After we got settled the wind started to pick up and we had gusts of 20 - 25 knots., it made it a little uncomfortable but still no fetch just some mind swells. To bed early now as we plan on getting up at 2:00am as we have 98 miles to go tomorrow to reach Banao.
Comments

05 April 2013
kenandcarole@gmail.com
Yesterday morning we participated in the net and were able to sell our Fiorentino para anchor which makes us very happy. Now if we could sell our liferaft that would be great!
Last night they had a cruisers get together at one of the local Pizza places, the pizza was great we got to visit with a lot of people and the beer and wine were $1 each. What can get better than this.
On the agenda for today, we need to head to Allbrook Mall so that we can make sure our internet is all set before we leave for Golfito, at least for the Panama part of our journey. We will have to get a new sim card once we get to Costa Rica. We also did some provisioning.
Thankyou to our friends Heather and Ron on Sundancer and dArcy & Isabelle on Ideal I, we really enjoyed our get together for appies and drinks. Safe travels to you all and hope to see you somewhere along the way in the future.

From East to West, Panama Canal

02 April 2013
Carole
WE are ready to let go the lines and head back through the Panama Canal. We have a couple of cruisers as line handlers plus 1 hired line handler onboard. We have to head out to the flats in Colon by 1pm. Our transit was scheduled for 5:30pm. Once we got to the flats, we were informed that our transit was now going to be 6pm. Darn, it is going to be dark when we transit and dark when we arrive in Gatun lake for the night. As scheduled our advisor came onboard at 6pm and off we went to transit the Gatun locks (3 chambers in total. The 2 cruiser friends that are helping are going through the canal on Friday and wanted to get some experience before their transit. For this transit we were behind a big freighter, we would rather be in front than behind. In the 3rd chamber we were quite close behind him and when he started to move out of the lock we were all pushed around quite a bit but the lines were still attached to the sides.....all was good. We were rafted to a French boat through this set. Once in Gatun Lake we had a couple of drinks and then off to bed as our advisor was to show up between 6:30 and 7am.
We are glad we set the alarm for 6am as the advisor arrived shortly after 6am, we had to get ourselves together and pull anchor right away. Again, the ride from the lake and down the canal to the Pedro Miguel locks is kind of boring but at least the weather was not scorching hot. We were to transit the locks starting at 12 noon, we got there early so we were had to hand around for a bit. While doing so we saw a large crocodile just this side of the first lock. This is the first one we have seen in Panama.
For this set of lock we were rafted to a Lagoon 420 catamaran called Chili Cat and on the other side of them was the French boat, so 3 of us rafted. Chili Cat was the control boat. We had a smooth transit through these locks and arrived at the La Playita anchorage at 2pm. Once through the canal we dropped off the tires and ropes at Balboa Yacht Club and our crew who were now going to head back to Shelter Bay Marina.
It felt good to be back on the Pacific side, it actually felt comfortable. We found that there were a few of our friends still in the anchorage, people we had met in Bahia del Sol. Today we lazed around.
One thing we really missed at Shelter Bay was that they did not have a local net, so it was hard to contact other boats. On this side they have a local net and tomorrow morning we will be on it.
Comments

Back at Shelter Bay and friends arrive

14 March 2013
kenandcarole@gmail.com
We are now at Shelter Bay Marina, our friends on Optical Illusion and Warren and Peace have arrived, it was great to get together and have a visit with them. They will only be here for a couple of days and then they are off to the San Blas, etc.

We started to make arrangement to leave the boat on the hard at Shelter Bay and were busy putting it to bed. This involves washing all of the walls, drawers, bilges, etc with Vinigar and water. Vacuum sealing all of the lines and some of the food items, washing and waxing the outside of the boat, taking down all of the lines and making sure everything is sealed and covered. We were pretty much done this when we started re-evaluating our decision to leave the boat here on the hard and to come back next year and do more fo the San Blas. We talked to a lot of the cruisers that had come from the caribbean and gathered more info on the areas we had planned on visiting. There are many things in addition to this that we took into consideration before making our decision to start investigating shipping the boat home as another option. Next year was going to be our last year of offshore cruising anyway. As many of you know we have decided to ship the boat home. We were going to use Yachtpath but found out while we were in negotiations that they had filed Chapter 11. We found out there was another shipping company heading to Victoria but we have to get the boat to Golfito as they do not pick up in Colon. So all is set and we will be heading to Golfito to ship the boat home, we are very much looking forward to seeing family and friends and sailing our local waters this summer. Our transit date for the canal is Tuesday April 2nd, we will now be heading West back to the Pacific.
Comments
Older
Contents 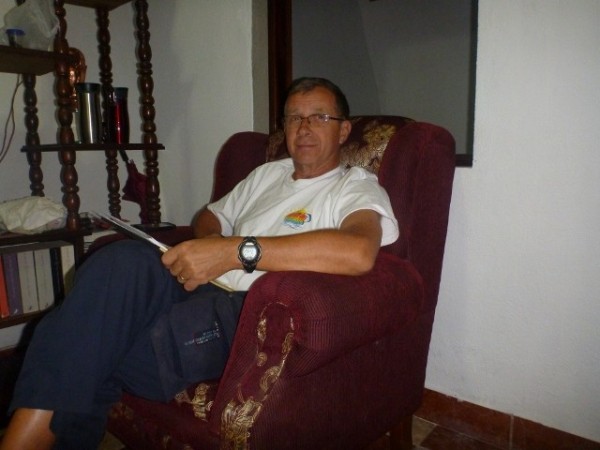