The breeze generally held up for the whole way from Cascais to Madeira with between 13 and 18kts most of the way, apart from a lighter spell overnight on Saturday when we had to motor for about 6 hours.

Just before sunrise on Monday during Sarah's second solo watch [Neil, don't tell Mollie!! ;-) ] the lights of the island of Porto Santo appeared on our starboard bow, only 25 miles to go to Madeira.

4 hours later we rounded the headland at Ponto Sao Lourenco, dropped sails and approached the Marina of Quinta do Lordo where we were met by harbourmaster Carlos in his RIB who led us to our berth. 533 nautical miles covered in 75 hours 15 minutes at an average of 7.1kts.

Later that evening David, a tall Irish sailor, strolled round to the dock. David was interested in our experiences with our Nautitech Open 46 catamaran as he wanted a fast cruising boat for his family.

After discussing the merits of our boat, during which we raved about our fast crossing, we asked what he was sailing on. It turned out he'd just cruised down from Brittany on a very racy looking boat two pontoons down. Their top speed had been 22 knots on passage and they considered 12 knots to be slow!! Our yacht suddenly seemed pedestrian!

It turned out that he had been sailing double-handed with famous French round the world sailor Jean-Pierre Dick on his amazing fast JP54 cruiser racer.

David invited us round to see this amazing machine, an offer we took up the following morning.

The JP54 is an all carbon fibre construction which essentially is an IMOCA round the world racing modified for cruising at outrageous speed. It has a one-piece interior navigation station and galley that can be rotated from one side of the boat to the other as the boat heels (an improvement for mono-hull sailors but I still think our "always flat" catamaran has the edge...even if its not as cool).

Jean-Pierre has twice held the 24hr distance sailing record and won many of the most significant offshore races fully-crewed, double handed and single handed following an equally successful inshore racing in his youth in the First Class 8, J/24 and Melges 24 classes. 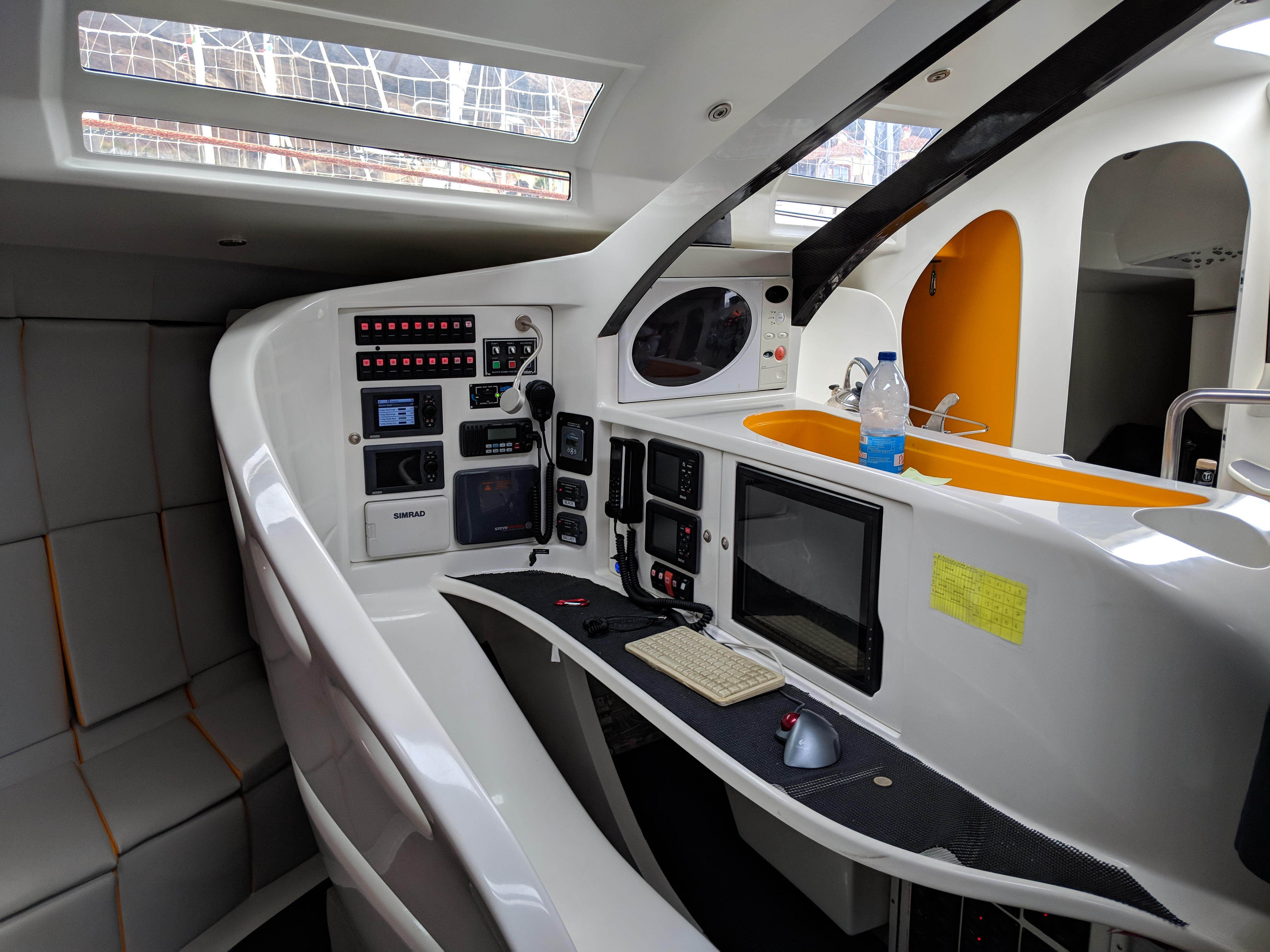 JP kindly explained the concept behind the boat, which is designed for fast cruising and occasional racing and then showed us around. Apart from the galley/nav stations, carbon rig and a canting keel, the yacht has unusual innovations such as walls lined with lockers covered with cushions (probably necessary at the speed this flyer makes; David explained that JP doesn't do "slow" and as such moving around down below can be a challenge). The boat has 4 cabins and as the pictures show is unlike anything I'd seen before.

JP and David are also crossing the Atlantic shortly and will then race back from Newport to the UK later in the year... Mike was offered a crewing role but for some reason declined politely! 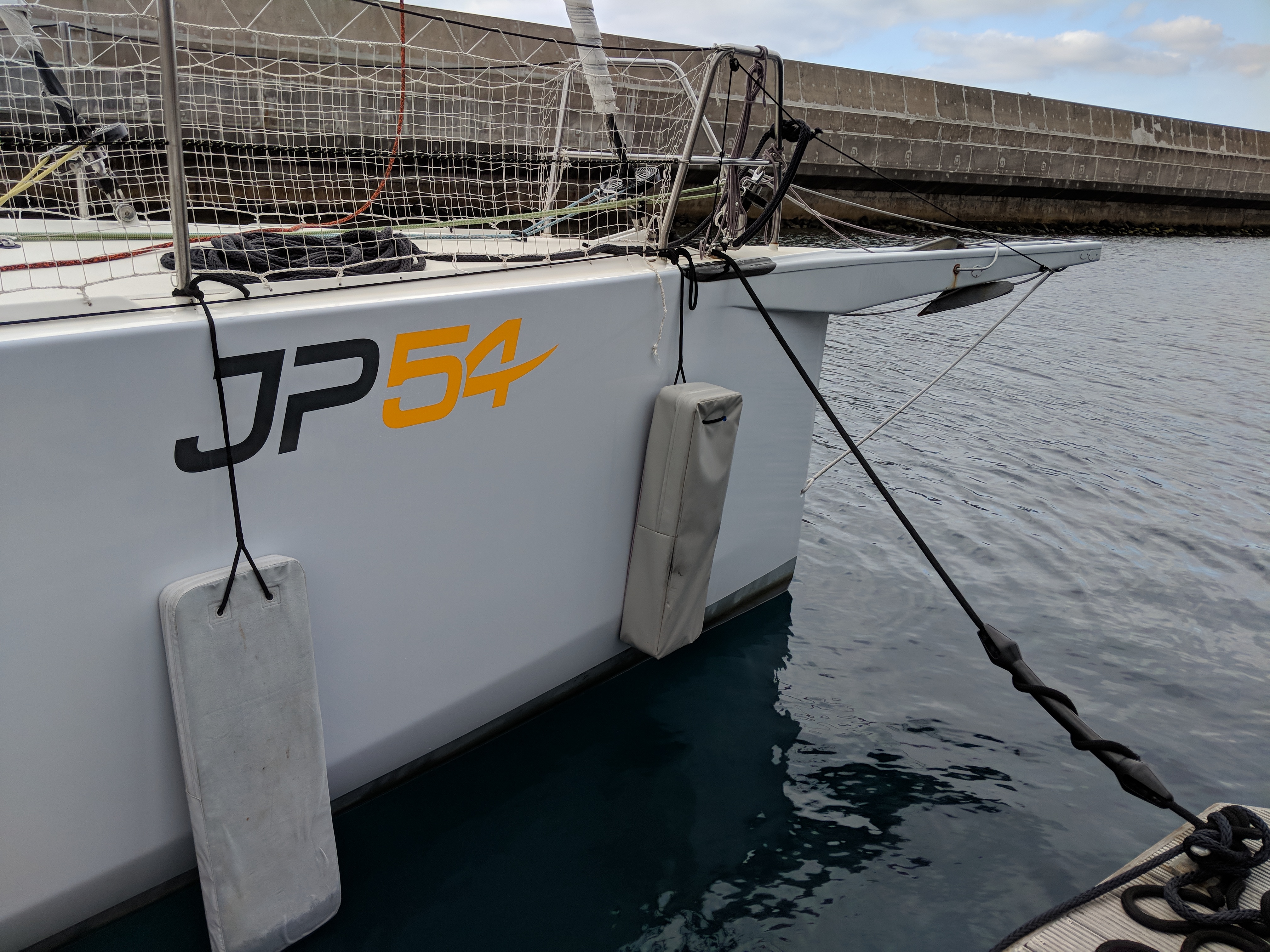 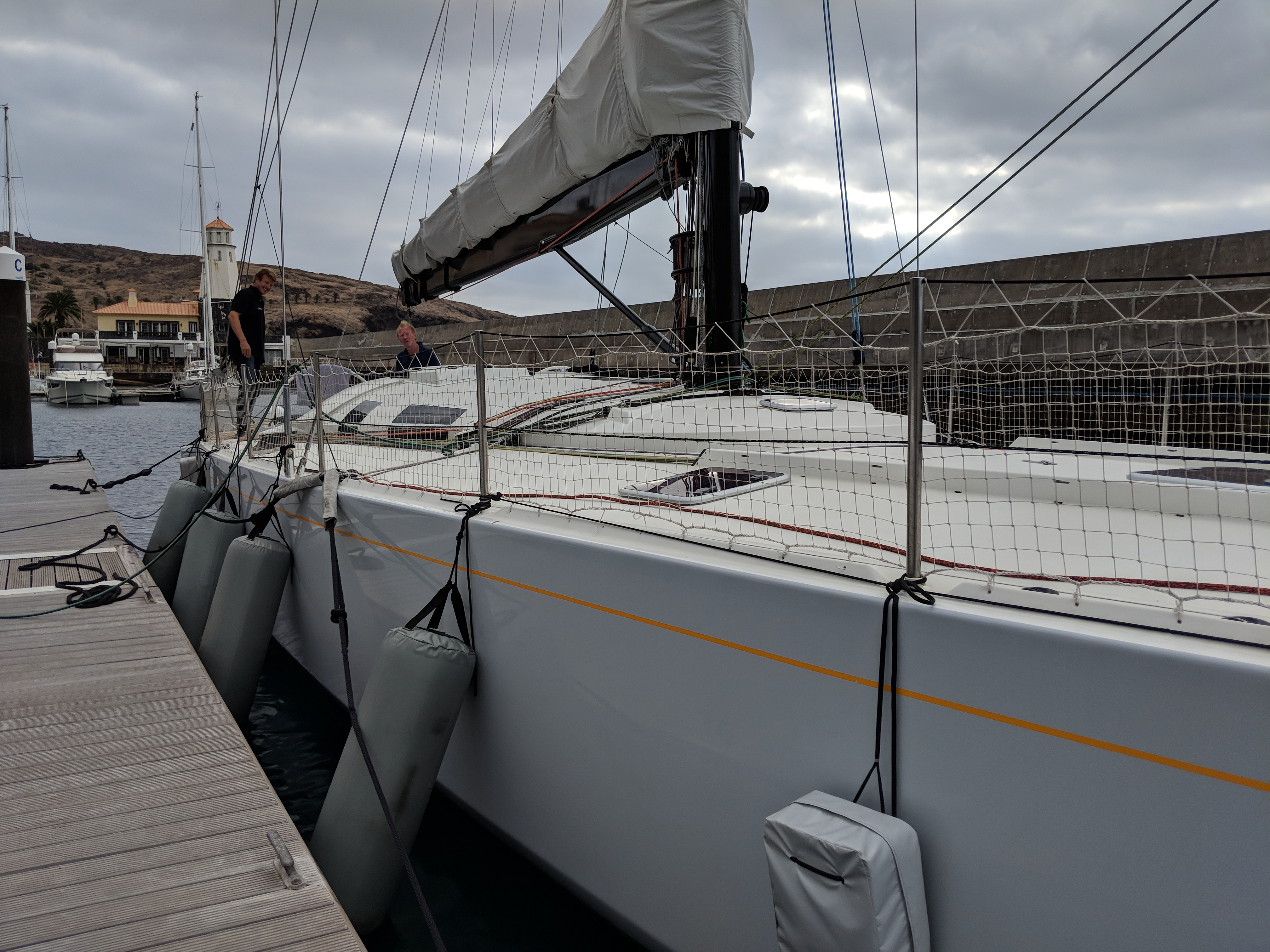