Madeira and onto the Selvagem Islands Madeira is an absolute jewel of an island and well worth an extended visit or holiday. We took a taxi into the bustling capital Funchal for dinner in the tight streets of the old town and in the morning hired a car for tour around the island. First stop the spectacular 580m high cliffs at Cabo Girao with an entertaining glass floored viewing gallery at the top and our 0.9 litre engined Clio struggling to cope with the steep and winding ascent.

We then drove across the island to Sao Vincent, the lush northern side of the island a complete contrast to the more arid south. After a lunch in a sea-side restaurant watching the surfers, we continued to the north-western tip of the island and the resort town of Porto Moniz and its sea water rock pools, now extended by walls into large sea water swimming pools. To return home we took the interior road through the mountains and above the clouds back to Funchal hoping to see the tropical gardens above the city.

It was a bit of a race against time but we were relieved to arrive about 50 minutes before closing time, only to be told that they actually stop entrances 2 hours before closing because the gardens are so large. Fortunately there was other entertainment on hand; the gardens are next to the top of the cable car, adjacent to which there is an older alternative route down to town; riding in basket sledges with wooden runners on the road driven straight down the hill! I retrieved the car then Mike and Sarah set off on the hair-raising descent, two lads on the back of the sledge steering and braking with their shoes on the road.

Back in Funchal it was time to have a beer and provision the boat for the final leg to Las Palmas in Gran Canaria. Johanna, the helpful marina manager, had arranged a permit for us to visit the Ilhas Selvagem, a pair of rocky islands 180 miles south west of Madeira and 120nm from The Canaries; these would be our last stopover on the voyage. The weather forecast was for very light winds for the rest of the week and in the morning we set off sailing at first with full main and code zero. We saw a large group of 30 or so pilot whales, then as the afternoon drew to a close the wind died and we had to turn the engines on for the rest of the trip.

Time to try out our new rod, we attached our bright pink lure and set it about 100m behind the boat. After about half an hour Sarah spotted birds circling in the same area and we worried they might dive on the hook, bringing flashbacks to an incident with our son Jamie, a fishing rod and a seagull in the Helford River many years ago! We decided to reel in but almost immediate "bang", the line was grabbed and the reel span as the lure shot away. A quick glance showed with relief that it wasn't a bird but must be a fish and a lively one at that. 10 minutes of battling later, it tired as we brought it in and we saw a sizeable Skipjack Tuna, probably around 4kg. 20 minutes later it had been landed, dispatched and then expertly filleted by Anne-Laure; within an hour we were having supper! 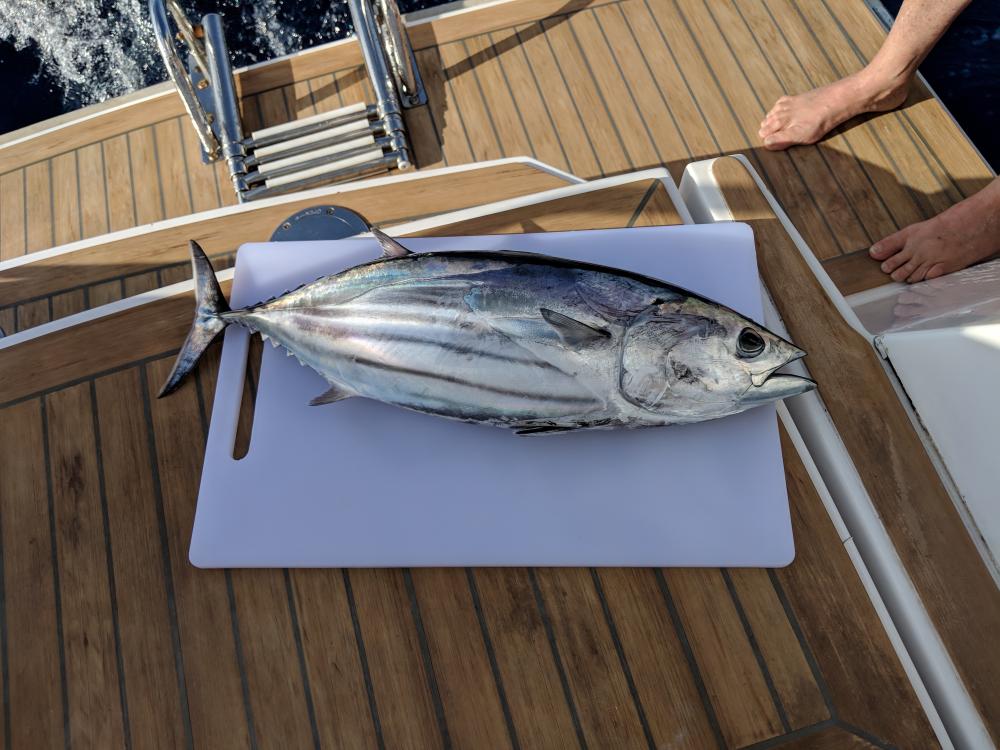 The rest of the night was calm and uneventful, leading to discussions about which stars or planets we could see, as there was little else to keep watch for. We run on a single engine at night and use the autopilot so watch keeping can take place from within the cabin, which has 360 degree views out. We switch engines at each change of watch so the the next person on watch has 3 hours undisturbed sleep before coming on duty.

The morning saw the rocky island of Grande Selvagem appear. It needs a careful approach, with offlying rocks up to 1/2 mile offshore. Rounding to the south of the islands we approached the tiny anchorage (more a small inlet) and, having called the Maritime Police who guard the island, we were directed to pick up one of the two recently laid moorings for the night.