On Friday morning we launched the tender to go ashore at Gran Selvagem; we'd arranged to be given a tour of the island at 1000 by the wardens before leaving at 1400 on our final overnight passage to Gran Canaria, 130nm away.

We reattached the outboard motor which, as part of our preparations for ocean sailing, we've decided to store on a bracket on Offbeat's transom on this trip rather than leaving it on the dinghy. This relieves strain on the dinghy mountings and davits if the boat moves in a large seaway.

To make it easier to launch and recover the outboard we used the new "crane" we specified when we added our new pole for our satellite comms. This crane can also double up as a additional method to help recover a crew member in the unfortunate event that someone has fallen overboard. We'll cover the extra preventive methods to stop this ever happening in another post! 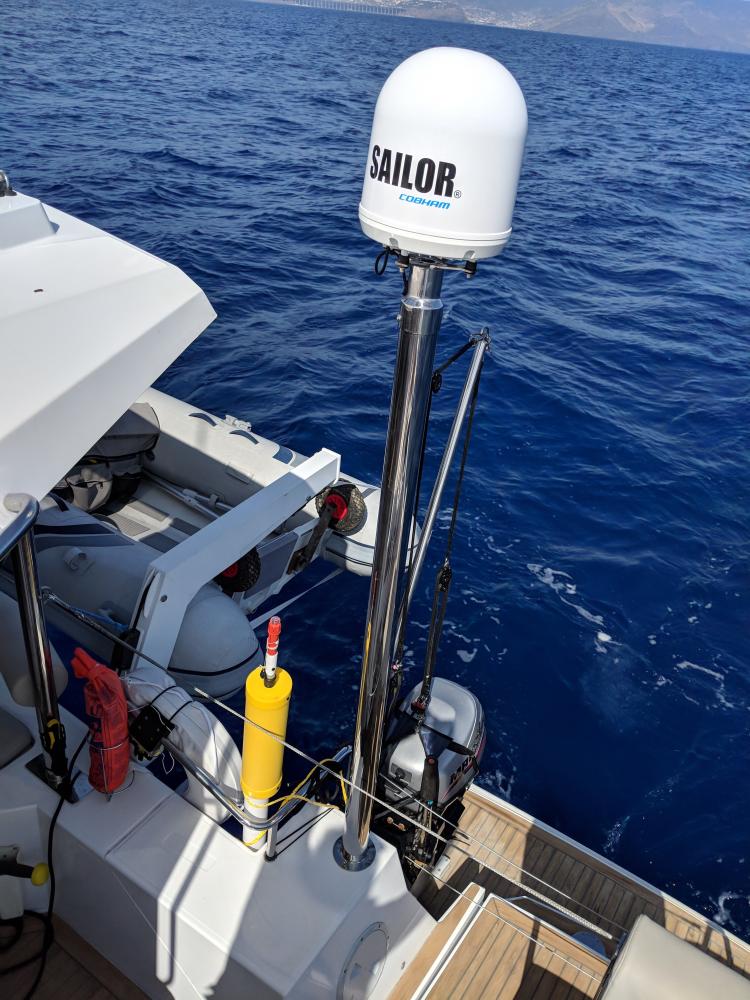 We made our way ashore, put down the wheels at the back of the dinghy so we could pull it up the concrete landing ramp. There is no beach in the inlet and in fact it's impossible to get ashore unless conditions were settled. We were surprised to be assisted by four policemen, then disappointed to see that it was because they had an "critical situation" and needed to go to the neighbouring island, Selvagem Pequena. They then shot off in their high-speed RIB with parting words to us that we were not to explore the island before they had checked our papers on their return.

It turned out that they have webcams on Pequena and they'd seen some Spanish fisherman close to or landing on the island. The Ilhas Selvagem or Savage Islands have been subject to a dispute for decades between Spain and Portugal. The Spanish claim they are rocks therefore theirs, as closer to the Canary Islands, the Portuguese say they are inhabited therefore theirs. The Permanent Commission of International Maritime Law gave sovereignty of the Savage Islands to Portugal in 1938 and the police base is to defend those rights. There is also one private house next to the police station.

Left alone on the dock we then found one warden, Jaques, was still ashore. He gave us the bad news that it was likely to be a 3-4 hour round trip for the police, so our expected tour wasn't going to happen. He did however let us climb up the adjacent ridge also long as we stayed in sight. The island is pretty barren, little vegetation but lots of lizards and hundreds of Shearwater chicks, nearly ready to fledge, in almost all of the numerous holes in the porous volcanic rock. The climb was exhausting in the heat but on our return Jaques greeted us with cold beers as we sat down to await the police.

We were then surprised by the appearance of an English lady who had come out of the private house. Elizabeth "Buffy" Zino is the wife of Frank Zino, who she took us to meet. The Zino family have owned the house for over 50 years and they visit for a fortnight at time several times a year. Buffy explained the history of the island, their research work on the Cory's Shearwaters and the challenges of living on the island for them, the wardens and the police, who right on cue reappeared over the horizon.

On arrival the police needed us to clear the dock to recover their large boat. We returned to Offbeat and shortly afterwards they came back out to see us on their dinghy to do the inevitable paperwork and passport checks. We swapped a cold bottle of wine for our permission to depart and then set off for Gran Canaria across a glassy windless sea.

Unfortunately it stayed that way all the way overnight to Gran Canaria. Sarah was surprised to see the first lighthouse at around 0400 at around 32 miles out, way beyond the nominal 21 m range and finally as we closed the busy port of Las Palmas the shipping and VHF radio traffic increased. 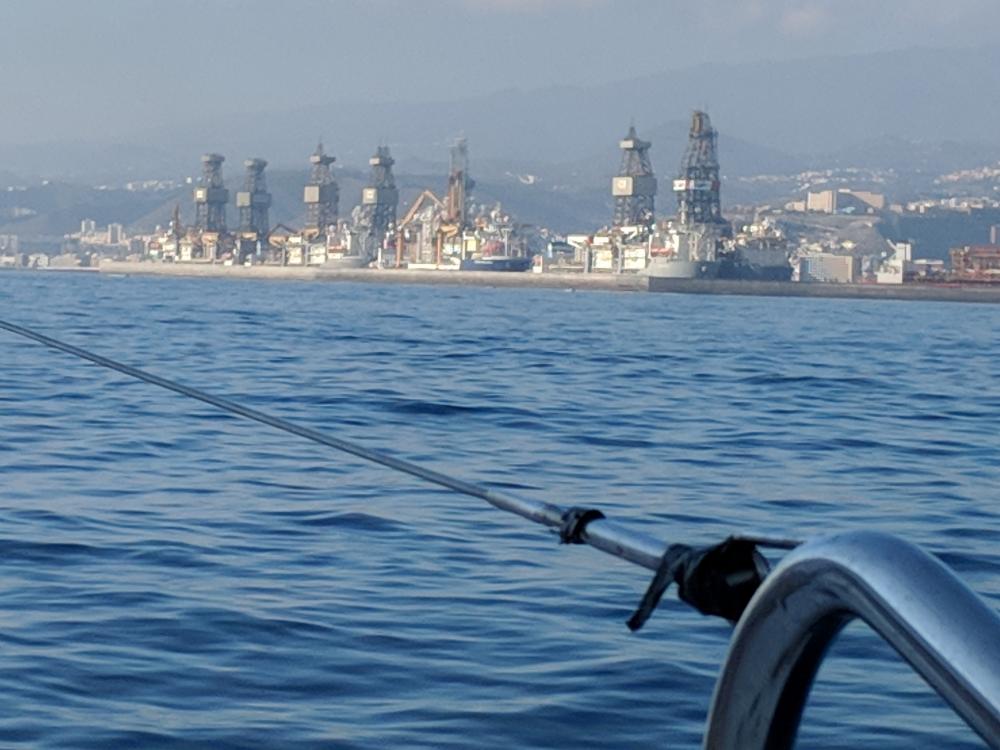 Las Palmas port is very industrial, lined with drilling ships, and the well equipped modern marina is tucked alongside the entrance. We arrived as expected at 1030 and by 1230 we had completed the paperwork (again!), refuelled for the first time since leaving the UK, and been shown to our berth by the helpful dockmaster. Time to open a bottle of cold bubbly to celebrate the end of Leg 2 of our adventure. 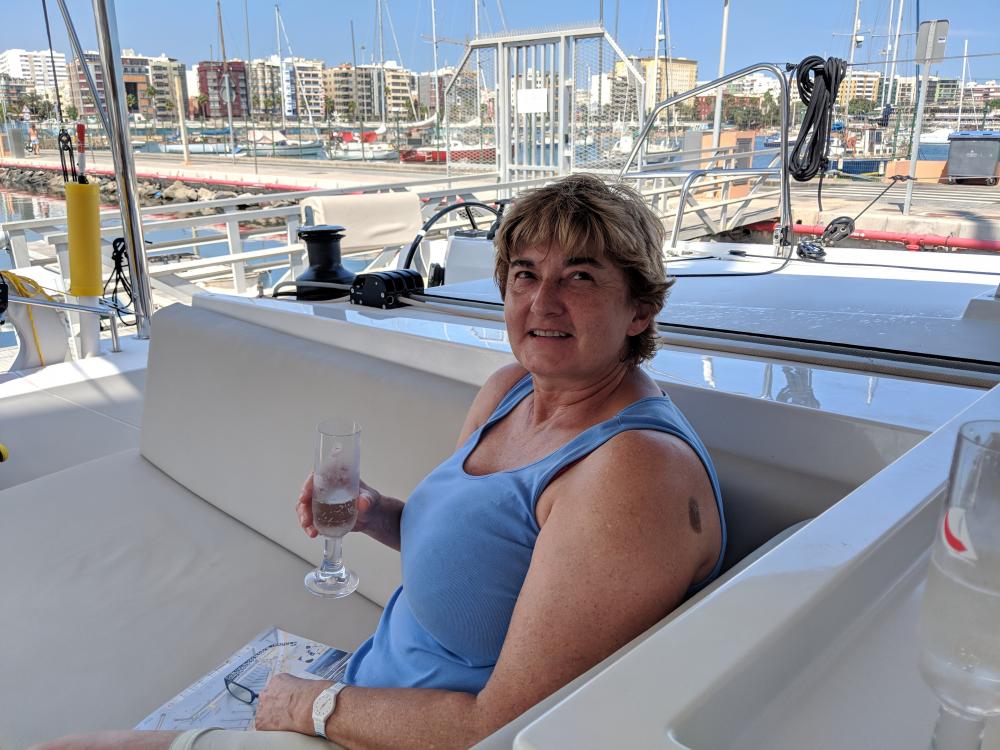 We've completed over 1800 miles from the UK to Gran Canaria, 800 across Biscay to Spain with Lucy and Tara; the last fortnight over a thousand miles in the wonderful company of Mike and Sarah. Lots of great memories, seen islands we didn't even know existed, and had the realisation that we should ideally have spent 6 months rather than 25 days! Oh well, there always next time.

We flew back to the UK leaving Mike and Sarah on board, but in just over a month we will all reconvene for the small hop across the pond. 2500 miles across the Atlantic Ocean as part of the 2018 ARC+Cape Verde.