A watery end for Napoleon Yesterday saw the end of a well loved member of the Offbeat team. We decided that Napoleon, our Iberica ham, was getting towards the end of it's time with us. We've been carving slices off for lunch each day and recovering it with its original fat and cladding it in a tea towel to prevent it from drying out too much. We've been getting through the meat quite quickly and he was getting a little skinny and when, during the night, Napoleon leapt off his shelf and shed fat over the floor, we decided his time had come.

We've been doing very well with managing our rubbish, after over a week we have several bags of recycling waste in the bilge but are still on our first small bag of general waste which will also be held until St Lucia. To avoid rotting products on board, easily perishable organic food waste only can go in the sea but we have to dispose of any bone over 100 miles from the coast. Queue Mike with our filleting knife for a marathon carving session, after 90 minutes we had several Tupperware boxes of sliced ham and we then said goodbye over the side to our last souvenir of the Canaries.

As usual there was stuff to fix on board, our echo sounder had failed just before Cape Verde and the replacement is being couriered to meet us in St Lucia (thanks Amina!) but subsequently we were disturbed to lose two other instruments at starboard helm. Firstly one of our instrument displays went into a permanent reboot cycle, then eventually stopped completely, apparently dead, then one of the autopilot control pads adjacent to it also failed. Neither are particularly problematical, we have 2 other autopilot control pads and multiple means of seeing the data but it's inconvenient to lose the information at one of the two helm stations and was a bit worrying.. what might be next to go?

A series of emails back to JD, our every helpful marine electronics installer, suggested that it might be a power issue but after monitoring we saw this was fine. We were advised to disconnect the failed devices from the NMEA 2000 network, this is a marine version of the Ethernet standard. At this point we realised that both of the new failures were on the same side of the boat as the echosounder. Of course as soon as we'd disconnected this from the network both of the other instruments sprang back into life. Hooray...but I thought this sabbatical was about getting away from IT for a while!

We made really good time during the last 24 hours with our rebuilt downwind sail, chafe problems resolved and again our sailmakers are shipping a replacement cable with better thimbles to St Lucia (thanks Rob)!! We caught up over 20miles on the boats ahead but with Skyfall (the Lagoon 450) and Mango (Lagoon 50) still some way ahead. Both yachts had a head start on day 1 by motoring most the day whilst we sailed mostly, however both also have a different type of downwind sail called a Parasailor (google it). This Parasailor sail is proving very fast and difficult to beat however.

You may have noticed much of the fleet heading further south over the last two days, there are two reasons for this, firstly there was a patch of light wind forecast to the north which everyone wants to avoid and secondly the wind direction has steadily been swinging from an Easterly direction back towards the North East (the opposite to what might normally be expected in this part the ocean) this means boats heading directly downwind would sail in the gentle left hand turn you can see on the trackers as the wind shifts.

At 4am this morning, on the change of watch, we decided the time had come to drop our runner and change to our other furling code 0 sail. This would allow us to head back in the direction of St Lucia rather than Venezuela! Of course we were tired and it was windy and we made a right pigs ear of it, resulting in a massive tangle in the sail we were dropping. We should have waited until daylight. As of 1000 we're are romping along on our new course with the zero (please don't tell Skyfall!) and we hope that the Parasailor can't sail in this direction as easily! The tangled runner is sitting bundled in the bag in our cockpit waiting us to summon the mental energy to sort it out this afternoon....and people were asking me what we did all day on the boat! 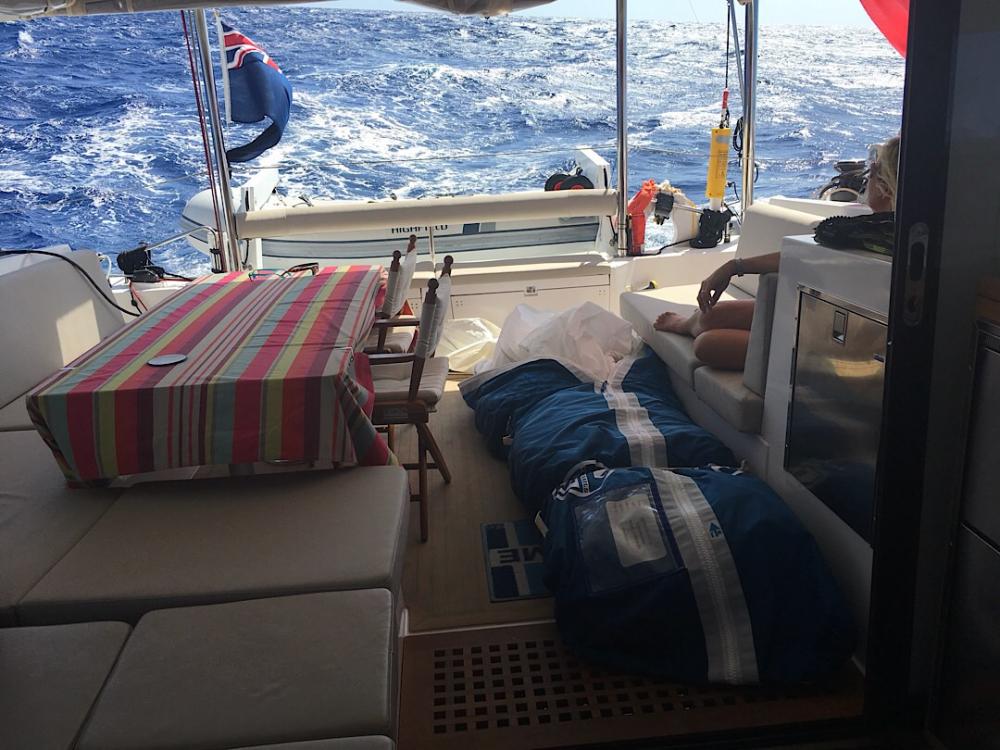