It's now some two weeks since we arrived in St Lucia, apologies for the delay in the last post.

The last day at sea was as breezy as the previous night and we were only 15 miles from Saint Lucia when we were hit by the biggest squall of the whole crossing. 2 reefs quickly in the main, 1/2 rolled jib, then rain and 38kts of wind. Offbeat handled it perfectly and we set another speed record of 21kts as I took off the auto-pilot and steered her down the face of a large wave. 20 mins later we are wallowing in 12 kts of wind.

After having lunch, we rehoisted the Code 0 for the final few miles to Pigeon Island and then rounded up for the short beat to the finish. We were all elated to cross the line and only sorry we couldn't live stream the arrival for you (mobile data is 3G at best and very expensive). 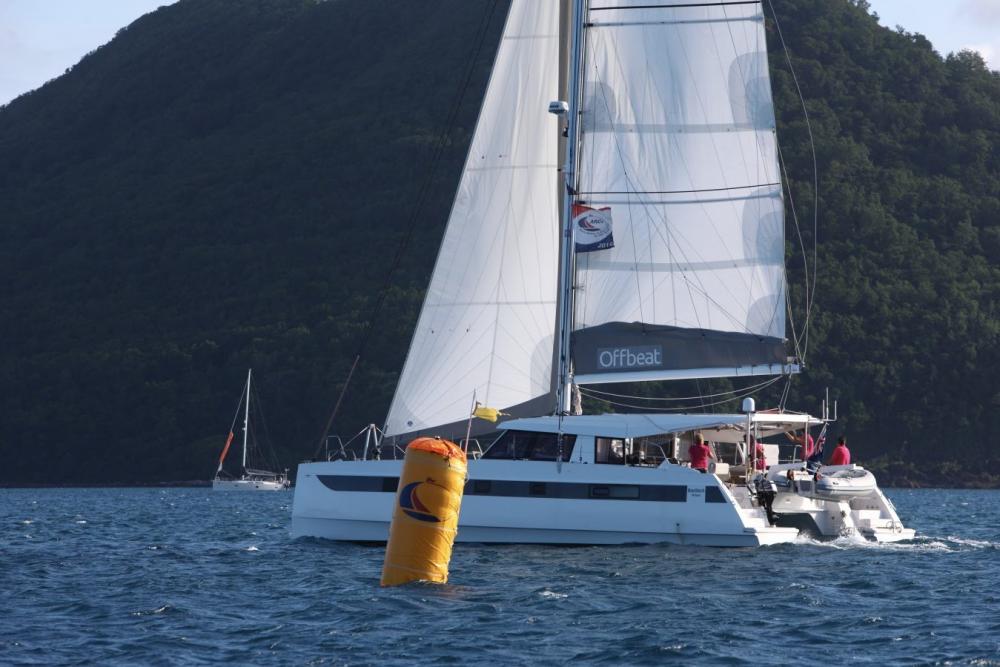 30 minutes later we were moored on a pontoon at Rodney Bar Marina, the ARC "Yellow shirts" were there to greet us with a bowl of fresh fruit and 5 rum punches. We went ashore to complete the marina and customs formalities and then bumped into the crew of Porto Salgado, the Irish boat we'd had to avoid in mid-Atlantic . They had set up the "Irish embassy" in one of the bars and unfortunately, once detained, we didn't get released for about 4 hours!

Over the next couple of days we started to wind down, 12 days and nights offshore sailing leaves the body clock disrupted and you are never completely relaxed. We checked the boat again and took short sails up and down Saint Lucia with overnight stays at Marigot Bay; on a mooring off Soufriere where we had a wonderful display by large fish eating bats; and at anchor out in Rodney Bay again.

Reflecting on the trip; we had prepared well, both the boat and as a crew, and that gave us an easier and faster trip than some of the other boats. It certainly had moments of drama; sails dropping into the water, reefing in the middle of the night and trips up the mast. We tested our ingenuity making running repairs to the boat (I'm not known for my handyman skills) and Lucy was a star with her rigging skills (whether repairing halliards, sails or making yet another block with a low-friction rings and dyneema). The strength of sailing experience with Mike, Sarah and Lucy meant that we were always were well within the capabilities of the crew. Our first-class catering, the ability to have near limitless fresh water from our watermaker and sailing flat on a catamaran also made life much more comfortable than for most of the mono-hull fleet.

Good satellite communications on board also helped; I could stay in touch with the business but I'm really grateful to Dave, Trevor and Vicky that the conversations and emails reduced to a trickle as the trickle as the trip went on - do you really need us back?? (don't answer that!). We could also make calls to stay in touch with anxious parents which was particularly important when Lucy's mum fell ill just after we'd left Cape Verde; we were all so relieved when she was discharged from hospital. The comms also helped with this blog and we really all loved the feedback from all of you, our supporters in comments, facebook "likes" and emails.

The final party and prizegiving was held on the Wednesday evening, we spent a fair bit of time with Rolf's team on Skyfall who had deservedly won the Multihull class, they'd pushed really hard to beat us and had little or none of the sail problems which had hampered us at the start of the leg.

The evening was another great opportunity to meet with the many of the other crews we had got to know well but, as we all swapped contact details, we soon realised it wasn't really goodbye as many of the boats were going to be cruising in the nearby islands with us until Christmas.

On a few boats we'd seen some people jump ship the moment they hit dry land; some boats had very different expectations amongst the crew, personality conflicts or those who were crippled by seasickness (or anxiety?). I think for most of us it was the longest period of time we've ever spent with other people in such close proximity (nearly six weeks on board together since Las Palmas), so I'm delighted the crew of Offbeat kept in good humour during the whole shared adventure and we were in the vast majority of boats for whom it was a massively positive experience; testing but enjoyable.

I think after that length of time though we were all missing family and the following afternoon it was time to drive Mike, Sarah and Lucy to the airport (an interesting drive on a National Holiday in St Lucia!). We've taken the other approach and our children arrive in St Lucia this afternoon to spend Christmas on the boat with us before we all fly back in the New Year.

Time to shut down the blog for now but thanks again to all of you for your support.
More
Comments
Older
Contents