Which way around Vancouver Island? Last summer Steve and I circumnavigated by the clockwise or contrary route, going up the outside and south down the inside. We chose that route because we wanted to avoid August on the west coast, which several previous trips had shown us can be stormy. I thought we would be the lone boat going clockwise, but we met three other boats also doing so. The experience made me want more information about just how the weather patterns can affect a circumnavigation.

• Monthly Differences in Winds. For a reality check on winds, I visited the windfinder website that provides statistics on winds, waves and weather for surfers, windsurfers, sailors and other outdoor sportspeople. There I found wind statistics for Tofino, on the southern part of the coast, Estevan Point midway up the coast, and Solander Island off the Brooks Peninsula. I printed out the windroses for all three locations for May-August and arranged them on the floor to get a sense of how winds change with month and location on the coast. Here are some things I learned by studying the windroses:

At Solander, summer winds really do blow predominantly from the north to northwest. But as you head south down the coast, they shift direction, becoming more Westerly at Estevan. At Tofino, they blow from a southerly direction almost half the time.

The chance of a southerly wind when rounding Estevan or the Brooks, although always less than a northerly wind, is higher in June and August than in July. This is consistent with our experience of sailing on this coast; the later in the summer we have sailed, the more frequently we've encountered southerly winds. 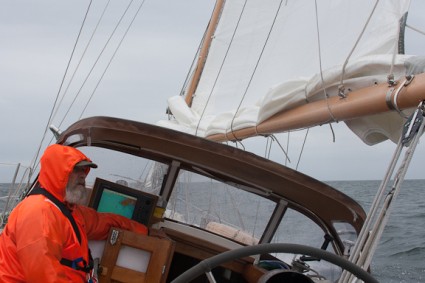 Photo: beating against southeasterlies off the Brooks Peninsula. 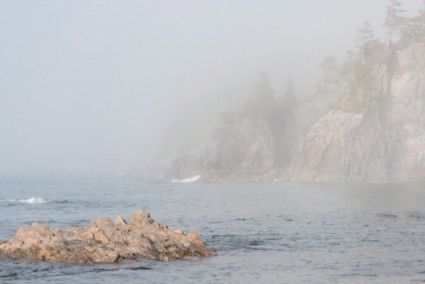 • Putting it all together. If you just considered wind direction, you would probably always opt to go the counterclockwise route as most sailors do. And if you added fog to the equation, you would probably choose to start your trip in June, go down the west coast in July and get home by August. But if your schedule precludes a June departure, things get more complicated. If your trip starts in July, there's an advantage to going the clockwise route, to going outside first: it puts you on the west coast when the weather is at its best. Yes, this means some beating and its best to give yourself time to wait for a good weather window when rounding the Brooks..

There are other reasons to choose the clockwise route. Marianne Scott, who is writing a series in Northwest Yachting . about going the "wrong way" chose the clockwise route, starting from Victoria, because she and her husband wanted to attend the annual festival of classical and jazz music, Music by the Sea. (http://www.musicbythesea.ca/) in Bamfield, in Barkley Sound on the southern part of the coast . If they had gone counterclockwise (the "right way"), they couldn't have reached Bamfield in time for the festival in early July. The other boats we encountered going the clockwise route were doing so because their owners had plans to meet family and friends on the inside later in the summer.

• Powerboating. Is it different if you're taking a powerboat up the coast instead of a sailboat? At the boat show I saw a presentation entitled Visiting the West Coast of Vancouver Island by Brian Pemberton of Northwest Explorations http://www.nwexplorations.com/charters/guided-flotillas/. Pemberton has guided flotillas of powerboats from Bellingham to Ketchikan via the west coast of Vancouver Island in two different years. He chooses to do the west coast portion of the trip at the beginning of the voyage, in May and early June (i.e. the clockwise route), because that's when the winds are lightest. The windfinder statistics back him up at Solander, but not at Estevan or Tofino where the lowest average wind speed is August, not June. But then rounding the Brooks Peninsula is one of the most treacherous passages of the trip so light winds there are more important.

• Purpose. If your goal is to visit the west coast of Vancouver Island, the best way is to not circumnavigate at all but to go up the west coast as far as you can get, then turn around and go back before you reach the Brooks Peninsula. That's what we did for 17 of the 18 trips described in Voyages to Windward: Sailing Adventures on Vancouver Island's West Coast. By going up and back on the west coast instead of around, you not only avoid the Brooks Peninsula, you also avoid Johnstone Strait with its wind against current and Cape Scott with its rough seas ---and you see the best part (i.e. the west coast) coming and going. And you still have a chance at those wonderful downwind sails in the sunshine on the way home. (And again, it's best to go in July.) For more information about this windward route, see the blog I posted a year ago: http://www.sailblogs.com/member/ospreyvoyages/?xjMsgID=207041

If you do circumnavigate - if you just want to say you did it or if plans with family and friends require you to visit both sides - then whatever way suits your schedule will work. Either way around the island will be a challenge and may involve long weather delays or beating against the wind. But then if it weren't a challenge, it wouldn't be such an accomplishment.