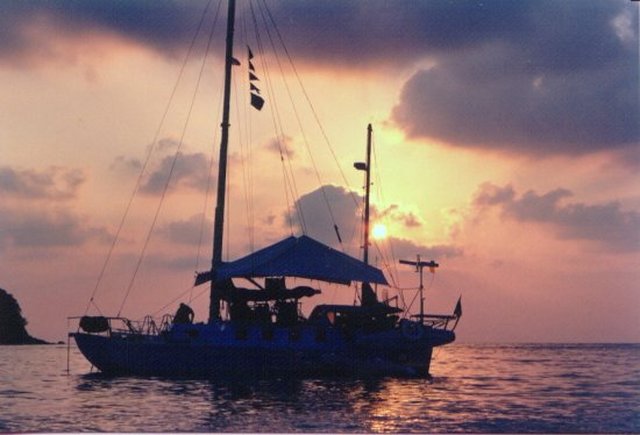 This is the beginning of our blog but not the beginning of our adventure. We started our adventure in 1999 when we left Portland Oregon. We harbor hoped down the west coast to San Diego. We joined the 1999 Baja HaHa Rally to sail south into Mexico and leapfrog into our cruising adventure. Most of our cruising adventure had been documented on a web site in Geocities.com. In October of 2009 Yahoo decided that it was no longer in the free web site business. We are starting a new with this blog. I have backed up the orginal svperpetua web site into a PDF.
Here is the link. It is a large PDF file 23.5 Meg. Enjoy!

2008/2009 Cruising Season recap
The 2008/2009 season was our first true cruising season since July of 2002. We Left Mazatlan on December 18, 2008 with a known engine over heating issue. We Sailed to Banderas Bay in 28 hours stopping first at Punta Mita, then moved on to La Cruz. The engine was performing great during these passages. We reprovisioned, visited with friends, rediscovered the town of La Cruz, last visited by us in 2001. While anchored out we discovered we had bad batteries and had to replace them. Fortunately there was a cruiser down from Mazatlan with a car and he gave us a ride to get the new batteries. We attended the cruisers Christmas party at Philo's restaurant and had some great potluck food and complete turkey fixing's.

Shortly after new years we went back out the Punta Mita, meet up with Ahwahnee our good buddies from Portland. Within a day we were both headed south. Our first stop was at Bahia Chamela.

We spent 4 days there exploring the restaurants and beaches. We meet up with some other friends from Portland onboard Rosebud. After some socializing we all headed south. Our next stop was in Bahia Tenacatita. On the way there we had our first engine over heating attack.

We spent two+ weeks in Tenacatita. During that time we had fun snorkeling, playing Bocce ball on the beach, playing cards and having snacks at the beach palapa, we went "shelling" across the bay and oh yeah worked on the engine issues. The raw water pump was replaced because it had a small leak. Leaking hoses were replaced. Coolant fluids topped up. All this effort was in an attempt to appease the overheating gods. It was to no avail!

As our supplies were starting to run out, so we headed over to Barra de Navidad. On the way the engine overheated much worse then it had before, now a noticeable amount of coolant fluid was missing out of the reservoir. We limped into the lagoon in Barra, but not after another type of incident.

This was Perpetua's first time back to Barra in seven years. As we motored up the channel all of the old landmarks used as range markers, had changed or didn't fit the crews' memory. The palm tree was missing. The left side of the island seemed out of place. The Coke sign was missing. The row of pilings and buoys didn't line up properly. Another bad case of "Cruisehiemers"! Perpetua found herself getting into shallower water every second and then driving right up on the sand bar. Nonetheless there was Perpetua hard aground, with a falling tide!

Dingies belonging to other cruisers showed up and tried to shove Perpetua off the bar. Just then a large catamaran cruised by and asked if we needed a hand. Two bowlines were rapidly made fast from Perpetua's bows to the cats stern. With the wide spread of the towlines, two engines of the catamaran, and seven dinghies along side, Perpetua began to move. At first slowly then she burst free as only mud can release a stuck object. Perpetua shot out into the channel narrowly avoiding a collision with the catamaran! The lines were quickly untied and all the dinghies released. Perpetua proceeded into the anchorage. She was unhurt except for her pride.

Once anchored safely in the Barra lagoon, we discovered what we thought was a leaking coolant hose, tried to fix it, but it continued to leak. In town, I found a replacement hose, however during installation I used a mirror to inspect the area behind and around the hose fitting. I discovered a crack in the coolant reservoir.

The reservoir had to be removed, welded and reinstalled. Now came the test. To our surprise a different coolant hose was now leaking. Apparently it had broken while dealing with the reservoir fix. This hose was unique, 2" tampering to 1 1/2" with a 90 degree turn. No hose was available and no chance of having one shipped down! I had some "Mariner's Choice Safety Wrap" tape. The package said it was good for 100 PSI and 212 degrees. I glued the torn hose on the outside and inside with "Kola Loka" supper glue. Then I wrapped the hose with 2 layers of tape. This combination of fixes stopped the leak. However after we left Barra and under load it did leak a little, we wrapped it with two more layers of tape. No more leaks! 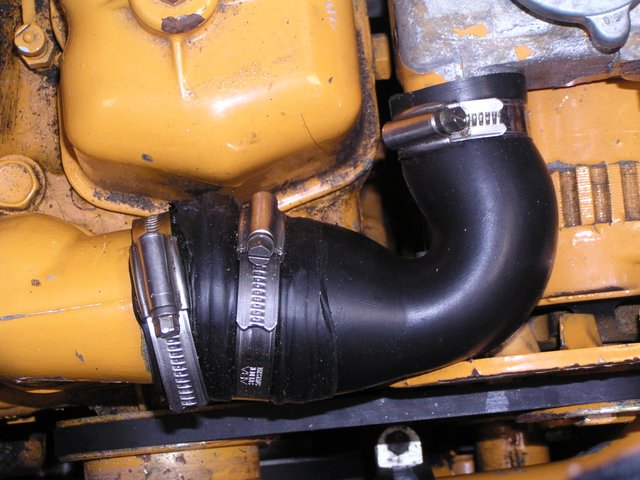 During the two weeks we stayed in Barra getting the engine working we enjoyed the local restaurants, swimming at the Sands and Grand Bay hotel pools and having French pastry delivered to the boat each morning. We made trips to the near by town of Melaque where we got groceries and visiting some land based friends from Alaska. Finally it was time to return to Tenacatita.

We spent another two+ weeks in Tenacatita. We resumed the beach Bocce ball and card and domino games, did some kayaking around the bay and made a trip across the bay to La Manzanilla in our dingies. We managed to land and depart through the surf without incident. This is a tourist town with a lot of gringo snowbirds down for the season. There are many shops and restaurants, some art studios and a park filled with crocodiles. We dinged through the mangroves on the "Jungle cruise" over to a near by beach for lunch on the beach in a palapa restaurant and then dinged back through the mangroves to our anchorage. During this visit Susan decided to start swimming to the beach with some of the other gals, while Pat stood by in the dingy "just in case". Alas it was time to begin our trek back north to Mazatlan.

The day we left we weren't getting much power out of our engine/prop. We barely made it around the point to the next anchorage. We knew a couple of the boats anchored in there and that one had a DC powered snorkel outfit that we could borrow. Susan had the honors of diving on the prop as we only had enough weights on our weight belt to keep Susan underwater far enough to clean the prop. It was really fouled and once it was cleaned we were on our way to Bahia Chamela. We spent 4 days waiting for good weather to head north back to Banderas bay. There is a nasty point (Cabo Corrientes) we must pass around on the way into Banderas bay. As we approached the point it became windier and bumpy, we decided to head into a near by anchorage, but by the time we were 3 miles off the winds had died and the seas had calmed down so we continued on around the point. We made it without any problems until Susan startled a whale sleeping on the surface into diving a way from the boat. The whale made quite a large phosphoresces cloud in the water as it dove. We continued on to the La Cruz anchorage without further adventures.

We spent 2 weeks at La Cruz. Part of the time was spent site seeing in downtown Puerto Vallarta. We visited some long term friends in Paradise Village Marina, we socialized among our friends in the anchorage and went shopping for supplies. We spent 6 days in the La Cruz Marina and had the boat topsides polished and waxed and the bottom cleaned. Soon it was time to head back out to Punta Mita and wait for good weather.

After a couple of days we cruised up to Bahia Chacala. We only spent one night here as it was too rolly of an anchorage. We didn't go a shore either.

The next day we moved up the coast 25 miles to Bahia Matanchen. This is a nice anchorage except for the "No See'ems" nasty tiny bugs that have a mean bite! We followed advice from the other cruisers and anchored way out in the bay a long way from any near by shores and were ok.

There is a town that's a few miles inland called San Blas. We spent one day getting into town (in the back of a pickup) and walking around the town and then back to the anchorage by bus. This had been our first time visiting the town. It's a very old and interesting town with a lot of Spanish history. There are a lot of mangrove swamps along the anchor shores (hence the bugs) and there are jungle cruises through them to see the wild life. We decided to go with some of the other cruisers in the anchorage. It was a lot of fun seeing lot and lots of birds. There was even a crocodile farm on the tour and a nice clear water spring. (sorry no photos, dead batteries). We ate lunch at a restaurant besides the clear cool fresh water pool, some folks went in for a swim. When the weather seemed fair for our last leg to Mazatlan we left Bahia Matanchen.

Our ride north was lumpy and bumpy at times but not all the way. We saw a large pod of dolphins at least 500. Some were doing acrobatics like in a show. It was really interesting to watch. Pat managed to get some movies of their antics. We also saw a couple of whales way off in the distance jumping out of the water. We made it back to Mazatlan after a 20 hour run up the coast. It was good to be back at our dock.

Now it was time to take care of last minute maintenance things and then put Perpetua to sleep for the summer.

We left for the north in early May for the summer. We left Perpetua with care takers and service providers to look into why the coolant reservoir was still leaking. It turned out to need a whole new coolant reservoir.

Thanks for visiting our blog. More to follow for sure!
Comments
Newer
Contents