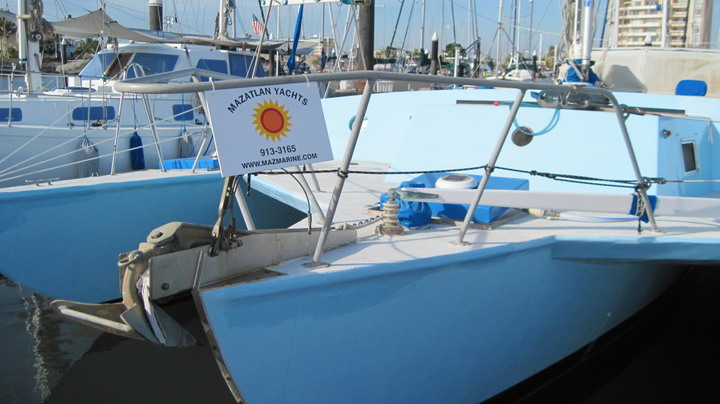 As you can tell by the above picture on Perpetua of a "Boat Broker's for sale sign" things have been spinning out of control since the last blog update. All the plans of local island cruises, inland trips had to be put on hold. We had been doing a lot of soul searching and hard thinking about the "end game" with regard to our 36 year relationship with Perpetua. All things considered we've had a pretty good run at it over the years and she's now in pretty good shape. However there's always a few old/new things, that will be taken care maybe even this season. Oh yeah this week the refer system died after 16 years of service! That will have to wait until fall.

We started seriously talking to the local boat broker about listing the boat and discovered that there was a lot of things to be done before and in conjunction with listing the boat. So we through out any earlier plans and jumped in with four feet. We had originally thought we'd be doing these activities toward the end of our season but oh no we soon realized that we'd better get going soon rather then later. The butterfly's will have to wait for another year.

So what the initial effort in December was to inventory and document everything that was going to be sold with the boat and everything else that was either going in the trash, to a local cruiser swap meet to be sold, everything else that was going to go north. This last category has been broken down into take north this year, next year, Etc. and when the boat actually sells. You see we can still take her out on a cruise if no one is showing any interest. We had to remove all our personnel gear and be ready for a photo shoot which has just finished! We also decided to remove everything that was going north as we had been creating a gigantic pile on one of the berths. So we talked to our local people and found a secure place where they deliver huge plastic tubs, you fill them up and they take them to their storage place. I know you're thinking oh sure where is that stuff really going, but this guy is someone we've been working with for years.

There were projects that had to be done for the photo "op", like paint the pilot house non-skid gray, replace the covers on the aft cabin cushions, reinstall lose teak parquet on the toilet base, wash off mold from various places it likes to grow, paint the forward wall in the berthing area and lots of other little jobs.

Once all is ready for a particular area to be photoed all unnecessary items/gear had to be removed then the shoot, then all the gear put back. We just finished all the photos today January 29th. We've been real busy for over a month!

While we were busy on the inventory we got word that Susan's mom was going to be able to move back into her independent living cottage on December 24th. This meant we had to travel from Mazatlan, Mexico to New Holland, Pa. during the holidays. Great! We lucked out on the flights and only had one stop in Houston, Tx. Where we changed planes. Only down side was on the return trip we had to lay over one night in Houston to be able to fly back to Mazatlan, the next day. Going the crowds were thick as ants on the march everyone trying to get into a line and then wait for some activity, checking in, security, customs, you know the routines. We made our flight with 20 minutes to spare. Coming back wasn't nearly as bad, the holiday rush was over. While in New Holland it snowed. One of the Admiral's favorite things to do is go for a walk during a snow fall. Fortunately for the skipper, it was cold and blowing quit a bit. The walk didn't last to long. We had spent 2 weeks helping her mom settle in, arranging support agencies, arranging her cottage so she could move about with her walker and celebrating Christmas with her family.

Before we left Mazatlan on December 21st, there was time to decorate the boat and do some celebrating with fellow cruisers.


Several nights out to the local restaurants for dinner and drinks. One Friday we went downtown to the Mazatlan art walk. This is an activity where you walk around the old town of Mazatlan and visit up to a dozen art studios. In route along the walk, we ate dinner at the El Tunnel, an old famous Mazatlan Restaurant. Of course along the walk there is the opportunity to buy some art. All in our party picked up a bobble or two. One our favorite places we stopped was the Nidart studio. They do amazing things with leather and we have in the past purchased a piece.

January continued to be a cold and often foggy. That was ok because we were working inside while it was cool. However our flannels and fleece got a work out in the AM's & PM's!