All Work And Still No Play! The storing of personnel stuff into the huge tubs continued until we had filled up 8. The first mate was betting we'd fill 12, I said we'd fill 9. 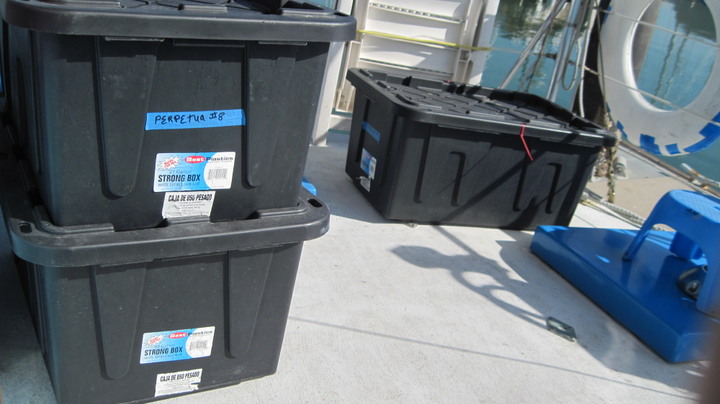 We still had another pile of stuff on the aft bunk, the port settee was full and the Honda generator still stored in the port ama. I think if we would have put the rest of the stuff into tubs Susan would have won the bet and then some! Our 'inventory" and "items excluded" documents and were worked and reworked, with still some last minute updates still needed.

We had signed the papers with the boat broker before we left for New Holland, PA. Since returning Perpetua has been exacting her revenge on the crew. First, the refrigerator started to not cool has it should and finally stopped working after 16 years. The technician declared it "muertos", dead! A $1000 replacement will have to come from the states next fall. Next the 6 CD changer stopped working. I commandeered a local fellow who has a side business of installing car stereos to take the CD charger to be repaired. He came back a few days later and said he could sell me a "all most new" replacement or he could continue to have the original fixed. The replacement was only $600 pesos ($50us) and was guaranteed to work with my original control head. It did work but was a different color, oh well, I kept the original in case the new owner wanted to get it fixed to match. Next my electric hand drill would not start. It was at least 16 years old too. It's still dead .... Next a brand new MP3 player we'd just bought at the local Walmart died after only two weeks. Fortunately they took it back and we got better replacement (more $). At this point we have our fingers crossed hoping that nothing else goes wrong.

An inspection of the top sides areas had revealed quit a bit of deck repairs and some fiber glass work that needed to be done. The most critical problems that needed to be done this season were addressed. The first mate had some sewing repairs as well. During this time our neighbor had their boat polished and waxed. We'd had this done in 2009 and it made our old hull paint shine. Our new cabin side paint had not been waxed since we had it painted last spring. So we hired a guy to polish and wax the hulls and wax the top sides. This was done in 2 an half days for $3500 pesos ($290US) and now the boat looks real good for showing a new buyer. Next season we'll fix the remainder of the deck issues and paint it.

Once this work was done it was time to prepare Perpetua for her long sleep. This season its even longer due to having to be in Texas for the new grand baby due March 12. The first mate revised our check list and we began in earnest. We had 12 days to complete all the tasks and we made it in 11. When it came time to repack the tubs into the car it took us about 2 hours to reopen each tub choose what we wanted to take north on this trip and then reorganized the remaining items into other tubs. We shrunk our pile of tubs down to 4 that we left for next season.

The first mate had a couple of places on her skin she wanted looked at so one after noon she went to an appointment. She didn't return for quit a while. When she did she had bandages on her nose and upper thigh. She was exhausted and surprised that she'd had two operations. Also she had to go to a bank and return to pay the fees. The samples were sent to a lab and she didn't hear from the doctor for 2 weeks. The cost was $5500 Pesos ($469US) for everything. She was glad to have done it and they turned out ok, except the one on her nose which she has to watch.

Once again the weather was plain weird. We woke two or three times a week to fog covering the area. This of cousre made it cool. We went so far as to break out the kerosene trawler lamp. When lite it produces quit a bit of heat, ordinarily something you don't want in the tropics. We also bought a clay flower pot and placed it over a burner on the stove to become a heat sink while the burner was turned on. Both of these tactics helped warm up the boat in the cool mornings.

The night before we left for the states was also our 21st anniversary. We invited a few good friends to go out to dinner with us. On our last night in Mazatlan we always go to the Chiles Pepper Restaurant. We always have fun there and the food is great too. This time was no exception. Although it was a little foggy.

The next morning we left after some breakfast, with Marilyn from Crackerbox, at Ricos coffee shop. We planned to drive all the way to San Carlos. It was a long day but we made it in by 5 PM. We dropped off our bags in our room and went to dinner and then right back to the room. We went to bed early. The next morning we went for some breakfast, then back to the room packed up and hit the road. We got the borader around 1 PM. We waited for 45 minutes to cross the border while the local vendors paraded up and down the waiting cars with displaying their wares. This ended up being a quick crossing as we didn't get inspected even though the car was stuffed. We made it to Green Valley and our friends house by 3 PM.

The next morning we drove to where we had stored the RV. It took 2.5 hours from the time we arrived at the storage lot to wake up and relocate it to a near by RV park and get setup. The first mate like to point out this relatively quick setup time compared tot he boat's 2 weeks.

We spent 3 days in green valley visiting friends and getting a leaky faucet repaired. We went to Mesa near Phoenix to visit more friends and family. While there we went target shooting with our friends, we hadn't done that in two or three coons ages! It was fun if not quit noisy. We had a great time seeing everyone, especially the skippers daughter and her son, who had just moved to Phoenix a few months before. All to soon it was time to move on towards Texas. We made the uneventful trip in 5 days, taking one day to regroup along the way. The only issues we had were at the gas pump where we were eaten alive! It's good to be settled now for several weeks while we wait for the arrival of our 14th grand child.