Taking Care of Business; While having Fun Too! 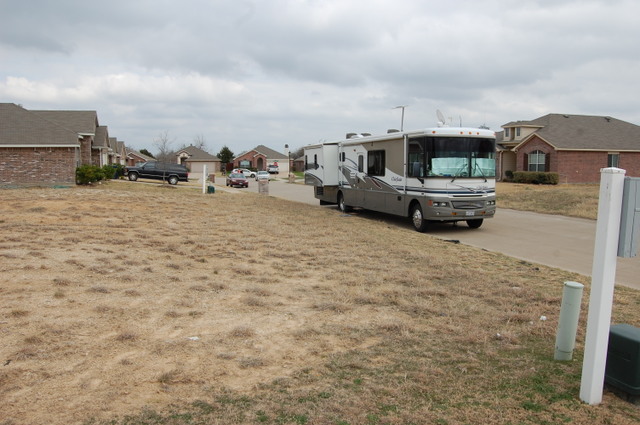 We arrived in early March and spent about four weeks in Anna Texas visiting with Pat's daughter and her family. We settled in helping with the chores of running a household of 6. The new baby wasn't due until the 12th of March. We managed to park on the street, for free, for 2 of those weeks. This saved us $400. Then once the neighborhood HOA Nazi reported our presence we had to move to an RV park that was near by for the remainder of our time. We got our car serviced while in town and the RV safety sticker check and a broken outlet plug fitting on our new TV repaired on site!

The new baby girl arrived in mid-March with only minor complications that were resolved quickly. We had our hands full then taking on more of the household chores. It was fun being able to help out and be present at such a beautiful time as that of a new born arrival. By the end of March things were beginning to get back to normal around the house hold and we decided it was time for us to explore some more of Texas. The new babies Christening was scheduled for the end of April so we had a month to play.

Our planned versus actual route varied some what and we ended up more or less going down through central Texas. We had thought we'd be looking at areas where we might in the future buy a lot or something. The other thing is that Texas is a big state and we very soon realized that we weren't going to cover very much of it this season. We both wanted to see South Padre Island. So that became our intended southern most destination. We still have friends in Austin and that became a stop over on the trip. Our first stop was the Lake Whitney area. We had seen RV lot offers in this area and we wanted to check them out. We drove around the area and looked at their offering. Once done we moved onto Austin where we spent 2 days visiting our friends. One couple has a motor home. So we made arrangements with them to meet up later, at their April RV club rendezvous.

We shoved off and headed south to the hill country SW of Austin. Our next stop was Kerrville. Kerrville is best known for its beautiful parks that line the Guadalupe River, which runs directly through the city. We found the lovely By The River RV Park right on the river and stayed 4 days. We used this location to jump off and see the President Johnson boyhood farm in Johnson City, the Wild Seed Farm and WWII Pacific and Admiral Nimitz memorials in Fredericksburg and the Stonehenge II and Easter Island replica's in Ingram. We had a lot of fun seeing all these places but is was also a lot of driving to see each of these attractions. We were supposed to go further south to Lake Madena in Bandera to look at lots but we ran out of time. Something to do next time.

We continued on south ending up in the Rio Grand Valley area. We stayed in Weslaco at a "snowbird" wintering camp ground. The place was deserted as most folks had left for the north. The price was right so we stayed a couple of days. We had been thinking of this area to buy a lot as there are many RV parks setup for the snowbirds in the towns of Mission, Mcallen, San Juan, Pharr, Weslaco and Harlingen and Brownsville. We traveled around the area looking at possible RV parks. We also went for a bird watching field trip the World Bird Center in Mission. We also learned that The Dignity Memorial Vietnam Wall was going to be in Mcallen. This is a three-quarter scale replica of the Vietnam Veterans Memorial in Washington, D.C. We decided that this area was too close to the Mexican border thus the inhabits lived a lot like they do in Mexico. Poor run down homes and dirty and dusty. I don't think we'll be spending much time in this area. We had to repair our front end combing as it had worked loose on the right side from quite a lot of wind on the drive here. When our time was up we gladly moved on to South Padre Island.

We stayed at the Isla Blanca RV Park for a week. This was an unexpected very nice county run RV park. It's located on the last bit of land on South Padre Island. The park is on the ocean and on the bay entrance channel. The rest of the town is mostly a snowbird and summer vacation area. However the north end of the island is a wild life refuge. Consequently there is a lot of sea life and birds around. It was great to be back near the ocean again. It was cooler then inland and there was always a breeze to keep you cool.

On this trip we decided to start a new hobby of "casual bird watching/identifying". We started this hobby in Weslaco our last stop. Here in South Padre there was another birding area. We spent a half day at The South Padre Island Birding Center.

Also we have friends who go "letterboxing". We decided to try that one too. In letterboxing you choose an avatar and a stamp to match. Then use your avatar name to set up a free account online at http://www.letterboxing.org/ or http://www.atlasquest.com/ or both. Then locate the letterboxes in your area. Next using the clues found online locate the letterbox. Then stamp the journal in the letterbox you found. Each box in turn has a stamp which you use to stamp your journal. Then you can record your finds online. Our avatar is "Spunky Turtle". We also found a stuffed turtle to go along and record the adventure for the grand kids. Susan puts together Spunky-post cards or Spunky-grams to keep the grand kids informed of our meanderings and activities.

Our first letterbox (attempt) occurred at the South Padre Island Sea Turtle Rescue Center. We spent about 2 hours touring and listening to the lectures. We found our avatar in the gift shop and had already gotten the clues to the letterbox. However when it came time to find it, it was not there and in fact there was construction going on where it was supposed to be hidden. Oh darn! We spent time walking on the beach and sight seeing around area.


We also toured the towns in the immediate area. First we went to Port Isabel. This is small fishing port on the mainland across from South Padre Island. We visited the town's shops and the light house park. We found our first letterbox at the light house keepers home.

Next we visited Harlingen about 20 miles away. This is the home of the original Iwo Jima war memorial statue. It was quite an impressive statue in a lovely setting at the Marine Military Academy. On the way back to the RV park we had both fan belts die. The engine was beginning to overheat when we spotted a repair station. They felt sorry for us and ran around town to find the replacement fan belts. It took an hour and half to get it fixed. We used the time to have pizza. Once fixed we returned to the RV with out any more issues.

Alas it was time to leave South Padre island but not the coast. Our next stop was Port Aransas on Mustang Island. This is located across the bay from Corpus Christi. We stayed at an Pioneer Beach RV Park we'd been to before. It's has very nice grounds, a heated pool and with beach access too. We did letterboxing here too. We allowed that pursuit to direct our touring, except for a visit to The Pier "99" Restaurant for lunch and more of their famous "T" shirts for the skipper. One of the places we went to was the Corpus Christi Museum of Science and History Educational Resources Center. Besides finding our letterbox we discovered an exhibit of the Columbus's ship replicas. We went other places on our quest but were disappointed not finding another letterbox. We spent time walking the beach and swimming in the pool. All to soon it was time to roll down the road. When leaving the island on the north end you have to take a free fairy (boat) ride, Ooooh Darn! This was our last spot near the coast and it was now time to head north. We had a rendezvous to keep with the Texas Boomers! 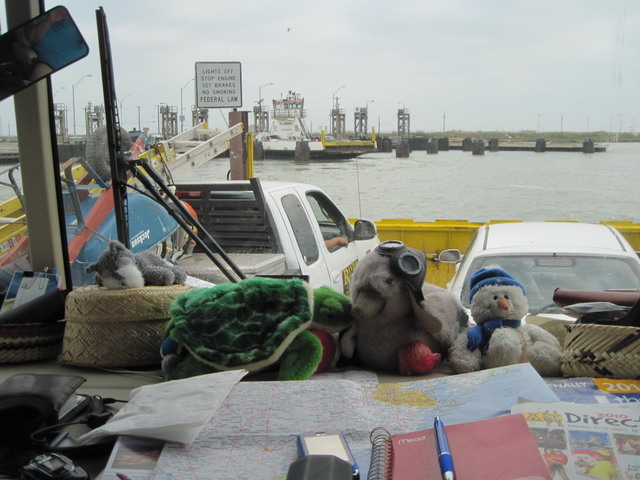 
Thanks for visiting our blog. More to follow for sure!
Comments
Newer Older
Contents