Northward Ho Plus The Summer and Fall in the NW 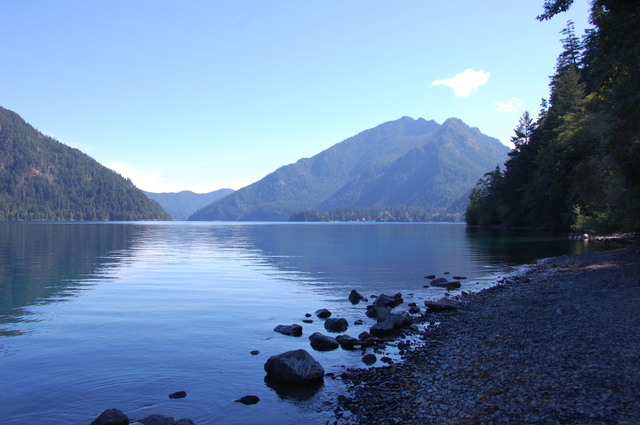 While we were in Phoenix Susan under went some medical examinations and we decided to wait for any further treatment until we returned to the NW. Since the local daily temperature was already in 100's+, the medical stuff was done and our daughter and new baby were doing fine, it was time for us to head to Portland, Oregon.


Our travel started in 104 degrees and by the time we reached the Walker Lake area of Nevada the wind was blowing at 40 miles an hour and the temperature was 41 degrees. We were freezing and the winds didn't die down until we reach Sparks Nevada. Even our good sized RV was being buffed from side to side by the winds. Once past Sparks it started to rain with an occasional snow flurry. We had a good drive but were just not used to the quick weather changes.

We had decided to spend a few days in Klamath, Or. to decompress after the drive up. Also we wanted to visit Crater Lake National Park. This is a lovely town located on the south end of (upper) Klamath Lake.

One of the things we like to do in a new place is checkout any Letterboxes in the area. Going on letterboxing treasure hunts gets us out into the country side of a new place. Its fun and we get to see places we otherwise wouldn't even know about. We spent a day running around Klamath collecting stamps from the letterbox sites.

We spent one day driving about 60 miles up to Crater Lake National Park. It was still early spring so due to snow only the south entrance was open. That was alright because Klamath is south of the park. There was a lot more snow on the ground then we had expected. Also there was only about 2.5 miles of the rim road open. The main lodge, a cafe/gift shop, and visitors center where open. There were only three overlook spots open for viewing the lake. Even so we had a great time, the weather was mostly cloudy with only a couple of sprinkles. The crowds were small because we were visiting out of season, which meant the roads were clear and we could stay at a view point as long as we could stand the wind and cold. We had lunch at the cafe and bought ourselves some souvenirs and then hit the road back to Klamath. On the way back we hunted for a letterbox and were rewarded with a find and lovely scenes in a small rural park. All to soon it was time to travel the last day on into Portland.

Our summer was spent partly between Portland and the coast, at our place in Ocean Park. Before we left Portland Susan had established new relationship with a doctor and set future appointment dates. Then there were family and grand kids to visit and celebrate their birthdays. There were friends to visit with, Letterbox (LB) hunts to be undertaken, yard work, bicycle rides, beach walks, local events to attend and something new Letterbox creating/planting. We had friends visit us at the coast, which included Letterboxing hunts, bicycle rides and kayaking on Loomis Lake. We went into Portland for special events, one such being the Annual Highland Games. Susan's son participates in the games and it usually is a family gathering. In August we had the family camp out at our place at the coast. The summer seemed to fly by, thus at the end of August it was time to go to the annual cruiser rendezvous in Cathlament. The cruisers gathering was very nice, with great food at the pot luck, but attendance was down for a second year in a row, must be the gas prices, knowing how cheap cruisers are. We spent extra time at Cathlament before and after the event for visiting with friends and naturally some of it was spent Letterbox hunting and now planting.

This was also was the meeting place for a trip we'd planned to circumnavigate the Olympic Peninsula with some of our good friends and their RV's.

Our first stop on the trip north up the coast was in Ocean Shores, Wa. We stayed at an Elks club camping area. Ocean Shores is a tourist town, most of the homes are seasonal. There are several restaurants and gift shops otherwise its is kinda low key. Even deer walking down and across the roads. We drove up the coast looking at the scenery, the small towns, while letterboxing too. As usual we saw places we wouldn't have seen.

Next stop on 101 north was the Lake Quinault area. This is a 3 by 4 mile by 250 ft deep mountain lake, it is nestled in between tree lined mountains. The lake is feed from the glaciers on the Olympic National Mountains just north and east of the lake. There is a lovely lodge, a campground and other facilities. Private homes are on part of the lake but the rest are trees on federal land. We had lunch here and tracked down a near by letterbox. (of course) Then we continued onto La Push.

La Push is on an Indian reservation and their RV park is right on the beach. We had wonderful ocean views and fair weather to boot. We had one full day here so we tore ourselves away from the beach and went into La push and near by Forts. In Forts we went to the Timber Museum. This was a very interesting museum depicting early logging life. (plus a LB find) We had lunch in town then went back out to the coast and visited Rialto Beach Park on the north side of the Quillayute River. (N. of La Push) The beach was not sand but billions and billions of small to medium sized rocks. The ocean swells hitting the rocks made them sort of hiss and gurgle. This was a nice park however it was fogged in and we couldn't even see the ocean let alone the off shore islands. (another LB find) It was cold to us so we soon went to our RV's for the remainder of the afternoon and dinner together outside. The day next we headed north up to Clallam Bay.


We used this RV park as a base for exploring the area for a couple of days. We spent one day checking out the fishing village of Sekiu, then onto Neah Bay. We visited the Makah Indian Nation Museum, which was filled with information about the tribe's history. We had lunch at a restaurant overlooking the bay and marina. Next we drove out to the Cape Flattery trail head. Here we hiked the ¾ mile path/boardwalk out to Cape Flatterty point. About half of the trail was a boardwalk with steps up and down the hilly terrain, along the way there were side trails out to view points on either side of the point. The weather was good and we had a great hike out and back. The hike in was all down hill so the hike back seemed much, much longer with frequent breathing breaks. Wore us out! The point's lookout is the furthest point NW in the continental US. Across a narrow strait lay's Tastoosh Island and a beautiful light house. Further out is the Strait of Juan De Fuca and the Pacfic Ocean. The views were spectacular! At Clallam Bay we lost one of our caravan rigs that had to return home to Portland.


From Clallam we drove 65 miles to the HOH National Rain Forest. The HOH Rain Forest rains, amount to the yearly total of 140 to 170 inches (or 12 to 14 feet!) of precipitation each year. Does mass quantities of hanging mosses mean anything to you? This park has several trails and camping. We took the "mini-trail and the "Hall of Mosses" trails, about a mile hike. We were rewarded with beautiful tree lined paths covered in mosses some of them hanging down a couple of feet. It was hard to stop saying WOW all the time. After the hike we stopped for lunch and then headed back to the RV park to prepare to head east to Port Angeles.

On the way to Port Angeles we drove by Lake Crescent. This is beautiful 12+ mile long crescent shaped lake with depths to 650 feet and visibilities to 60 feet in places, with water color a deep blue. The lake is surrounded by tree line mountains with great views of the lake along its shore. After we got settled at our new campground we back tracked by car to the lake to hunt out a letterbox while seeing some of the park and lodge.


The next day we drove 30 miles up to Hurricane Ridge visitors center. This is up in the mountains where even in the summer there is still some of the 35 feet of annual snow left on the ground. The visitors lodge is at 5,242 feet. From the outside patio is a spectacular view of Olympic Mountain range. Each mountain in view was still covered with snow in September. Once again we had to pick up our jaws from the ground while snapping pictures and shooting video as fast as possible. There are a few trails heading off from the visitors center, which we didn't use, instead we had lunch and spent more time in awe of the view.

Our caravan RV trip was nearing its end. The other RV couple had planned on going to Victoria, Canada to visit some of their friends. While we had planned on moving on to Sequim and Port Townsend before going to Seattle for a week. We spent a day in Sequim visiting some friends and touring the country side LB hunting. Next we moved onto Port Townsend. There we stayed at some boating friends from Mazatlan who offered us parking in their driveway. This time of year is when Port Townsend has it's annual Wooden boat festival. We found out that we had some friend's that were showing their boat in the show and another friend who had sailed up from Portland for a vacation who was visiting the festival. We spent a day touring the boats and exhibits and visiting with friends. In the afternoon most of the visiting yachts went out in the bay for a race. It was billed as a schooner race but all sizes and kinds of boats were out sailing. We chased LBs around Fort Worden State Park and also visited some friends staying at the campground. The last leg of the schooner regatta race sailed by the old fort. We were there as they rounded the last mark and headed back to town and the finish line. We had a great view of the boats from a hill high above the beach. A fitting end to our trip!

Alas our adventure was drawing to a close. We finished it off by riding on a fairy over to Everette, Wa and our next RV park. It was time to spend a week visiting our family and friends in Seattle. Its always fun to spend quality time with family members. From here we went to Vancouver, Wa. Here we stayed in our friends driveway for another week. We visited friends and family in the Portland area. We even found time to going kayaking on the Willamette River. However our main purpose being there was to help out a friend who was having an operation. By the end of September we were back at our place in Ocean Park. Where we're spending the fall until Thanksgiving.