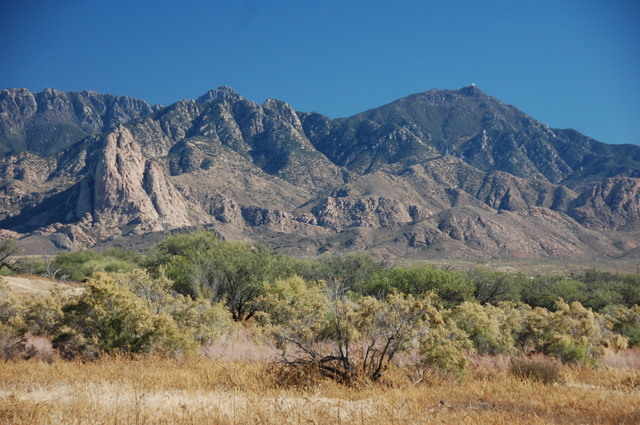 Along The Road to Whipple Observatory

In November we gingerly slipped into a couple of the activities available through the GV Recreation Center. Pat joined the Green Valley camera club and Susan joined the Santa Rita Art League of Green Valley. We had weekly meetings to go to at each of our SIG (special interest groups) we'd joined.

Pat's SIG group's weekly activity is to review five photos from each person who wants to participate, providing them with constructive criticism. Pat learned a lot from these reviews about his and the other peoples photographs. In between sessons Pat spent time learning the photo editing tools in order to "fix" his pictures from the review and preparing a set of pictures for the next session.


Susan activities included spending time working on various paintings and when ready including them in their weekly review sessions.

Susan noticed an ad in the Green Valley News regarding an art showing of yard art at the sculptors' home. On the scheduled day we along with the Herman & Nancy Ford visited the yard. We spent a good two hours with the sculptor, as our tour guide, wondering around his yard area. Every side of the house had his work displayed. It was either stuck in the ground or mounted to a structure. The Casa Vertigo yard Art visit was very interesting, entertianing and we came away with our purchase of "The Bird" statue. 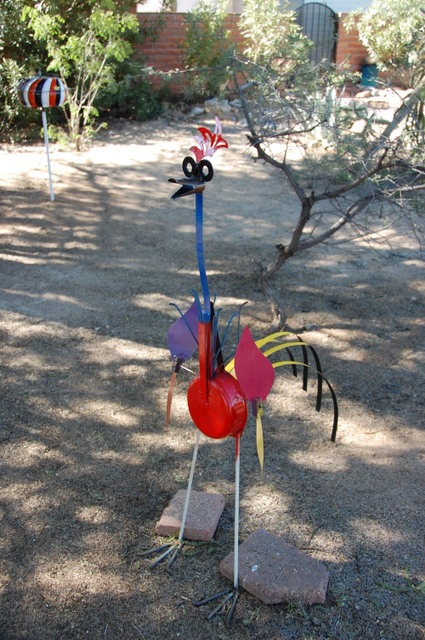 Susan had purchased a, new to us, kitchen sink faucet before coming south. So with free time on our hands and a leaking faucet in GV we had a small project to do. The project went fairly well with the only issues were Pat having the ability to get into and out of the space under the sink and working upside down. Now we have a new faucet. (I'm getting too old to do this ... !)

Fall Around Pairaiso Base Photo Album

Following another ad in the GV News, the Ford's and us headed off to Patagonia State Park for a pontoon boat ride. Apparently the park had a good sized lake in it and they offered two different boat rides. One to spot birds and the other to just tour the lake. We choose the later. It was almost an hours drive from our place to get to the park entrance. We enjoyed all the scenery en-route, and only got turned around once (thanks GPS). The park has other amenities such as camping, boat rentals, boat launch, fishing, hiking and other day uses. We paid our fees and had to get suited up in a PFD (life jacket). Most of our group had no problem finding PFD's that fit. Once the boat was back from the earlier tour we boarded and headed out. Besides the Captain, and a Naturalist/Conservationist there were 8 guests on board. Our tour lasted about an hour. We traveled around the south end of the lake from the boat landing. We went up a couple of small bays, down by the earthen retaining damn, a couple of islands and several of the lake camping spots. (accessible only by boat) All through the cruise the Naturalist provided information about the park's beginning, and it's history, and evolution plus the wildlife, the topography and the geology of the park. We all had a pleasant cruise even though it was windy and choppy on the return passage. Next we looked for LB's and Susan planted a new LB (Letterbox), along the way we stopped for a picnic lunch. Over all it was a great day!

Around the Tucson Arizona area are located space telescope observatories. They are on some of the mountain tops in the area. Each of these have multiple telescopes. We visited the one closest to us the Lawrence Whipple Observatory. There is a visitors center and at which you can join tours (reservations Required) to the summit observatories. Around the visitors center there are 4 gamma ray telescopes synchronized together while searching the heavens, plus there are several smaller ones for observing the nite sky.

It was too late in the season to take the tour, however, we enjoyed the visitors center exhibits and then moved over to a near by park with restrooms and picnic area with tables and a mile nature trail. We ate our packed lunch, took in the views and decided where to plant a Letterbox.

On the way up to the observatory we stopped at the Juan Bautista De Anza National Historic Trail. This is an access point to this historic trial. This is a lovely spot with desert and mountain views especially Elephant Head a local predominate monolith. It deserved a Letterbox plant so others would be able to appreciate the spot. If you're into hiking or biking this spot lets you begin traveling the trail.

We decided that since this was our first year in our new home we'd have Thanksgiving at our place. We invited everyone we knew was in the area and we had 8 folks including us over for dinner. Everyone of us are either still cruising or have sold their boats. There was no end to the sea tails. All the participating cooks out did themselves. If you didn't get enough to eat it was your own fault.

A couple of our Thanksgiving Day guests stayed at our place until Sunday. We spent the time hunting for Letterboxes by first going to Patagonia State Park and ultimately driving around the Santa Rita Mountains through Sonoita and Sahuarita. We made a stop in the town of Patagonia as they were having and open market. This is a very picturesque town, where many artists now live. We walked around the market and had lunch at the local hotel restaurant. It was a good time had by all and our Letterboxing hunting was successful too.

Seems in the south west as in Mexico they are always having Fiesta's to celebrate something all the time. In December, we learned about one near by being held at the San Jose' De Tumacacori mission. La Fiesta de Tumacácori: "In recognition and celebration of the many cultures that were historically and are presently associated with the Santa Cruz Valley, the Tumacácori Fiesta presents the traditional creations of these cultures." At this fiesta there were several folkloric dance groups. There were booths setup around the parade grounds with all sorts of native artisan crafts for sale and some food booths too. We had a good time at this annual cultural event. The Mission was open to the public so we also wonder around the grounds and marveled at the construction accomplished in the 1600's by the native Indians.

Susan and I continued to attend our clubs we'd joined and Pat even joined a new club of wood carvers. This was an activity he had been interested before the boat purchase. So he's slowly getting back into it one wood chip at a time.


Our micro wave had been behaving oddly and finely it stopped worked working correctly. We had home owners insurance, so we filled a claim found out what they would allow and found a new micro wave, with us covering the difference. It was delivered and installed without incident. It all happened in a matter of a couple of weeks. You may be wondering why I'd mention this event in our blog. This event might not seem out of the ordinary to you but for us having lived in Mexico and dealing with boat parts, sometimes you wait a long time before it all comes together, ie our refrigerator took 2 seasons (1.5 years) to resolve all the issues and get back to working properly again.

Our good friends and Letter Boxing buddies, Brent and Molly came down for a weekend. We went to Tubac, a historic town and tourist center, once there we hunted for LB's, had some great lunch and did some shopping. Tubac was first a Spanish Presidio (fort) San Ignacio de Tubac was founded in June of 1752 it lasted until 1849 before it was abandoned. By 1853 it was again being resettled and still flourishes today as both a state park and a arts and crafts tourist town.

All too soon it was time for the Christmas holidays. There are many goings on around Green valley as each club has scheduled events. We went to as many as we could. Also this holiday season was going to be special for us, because Pat's two daughters and their families were going to be together on Christmas day, at our new home, for the first time in a very long time. The Texas ladies arrived a few days before Christmas and stayed through New Years. The Phoenix family drove down for the Christmas day celebration. This was a great day for us having everyone there for dinner and to Celebrate Christmas.

All to soon everyone had to go home. However before my daughter from Texas left, her soon to be fiancee arrived by air to help drive her back to Dallas. All in all it was a grand way to end the year.

As you can tell I'm way behind in transcribing our journey's. So I'll have to keep hard at it!