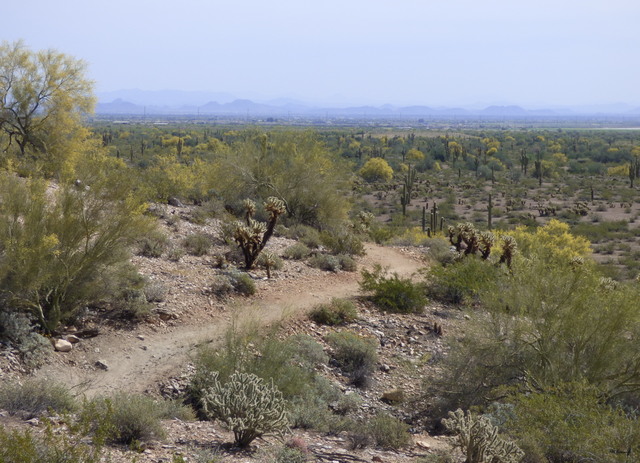 The Texas family contingent left on January 1st. Started missing them as they drove away and as they were vowing not to return in the winter ever again. You see it had been usually cold during there visit.

We were still immersed in our art and camera clubs. Each of us worked on projects for our respective clubs. Susan was painting once a week and Pat was taking and preparing photos for his special interest group (SIG) weekly picture reviews.

Together we signed up for a two day Mosaics class. This was a fun class in which we made hot plates out of various glass chard's, tiles and beads.

Pat signed up for a ten week course in digital photography, a new weekly SIG for users of his new camera, and a one day low light photography class. These kept him rather busy but learning new stuff and having a lot fun.

Then early one morning Pat came to on the floor, bleeding badly above his right eye. It seems that due to a bad sinus infection Pat had had a coughing fit, had sat up on the edge of the bed coughing, coughed so hard he passed out, then did a face plant on the rug covered tile floor. This resulted in a trip to the VA emergency clinic at 4:00 AM. He needed 6 six stitches above the right eye, but had a more worrisome swilling in the right eye. The ER doctors worked their magic and after five hours he was released. Over the next several weeks Pat visited various doctors to follow up on his eye, the stitches and the sinus issues. Over all not a pleasant experience.

Things didn't slow down as the various club and class activities continued. We had noticed some maintenance issues on the wall in the back patio and also on the front of the house under the window. We located the appropriate service people and supervised their work.

Late in the month our friends Tom & Sue came from Vancouver, Washington for a quick visit. Then we all drove up to Mesa Arizona to celebrate our friend Brent's 70th birthday. We helped out at the large party that was being thrown for him at his RV park and winter home. A good time was had by all!

While in Mesa we stopped in to visit Pat's daughter and her family. It sure is nice having family just a couple of hours away in Phoenix.

We left from Mesa and headed to Texas, as we had made arrangements to attend a nieces' wedding in St. Paul Minnesota and we were bringing Pat's daughter and her three girls along from McKinney Texas. After a long drive we made it to Texas, took a day off and then headed north on another long drive to St Paul. By the time we were in Kansas City we were in snow and ice country. We had no problems as the highways were clear and it wasn't snowing.

We had a wonderful time visiting family and attending the wedding. There was an open house at my brothers home so that all the family could stop by and visit. All to soon it was time to return to Texas.

On the way back we hit some sleet and freezing roads. We actually spun out on a windy slick spot. We did a 180º spin and landed sideways in the median. After assessing everyone's condition inside and the car outside we placed the car in low 4 x 4 and drove out of the icy median and carefully reentered the highway. We pulled off the highway at the next exit and took a break to calm everyone's nerves. The young ladies thought it was fun after the initial scare! NOT THE ADULTS THOUGH!!

Once in Texas we then spent a few days baby sitting the grand kids while mom and her fiancee took a trip and had time to themselves. This was nice to be with the kids and not traveling. Shortly after my daughter returned we left for Green Valley, Arizona. Our return trip was uneventful, which is always nice.

The remaining months just flew by, what with doctors visits, The Art League and camera club activities. Pat joined a photo editing special interest group (SIG) to learn about a new and "free" photo editing tool (GIMP). Susan took classes to qualify her to join the ceramics club and then proceeded to create a cookie jar and a grapes plaque wall hanging. We took a special 2 day class, in mosaics. Pat joined a wood carving group, Susan made a new quilt for the newest great grandson. Did I mention more doctor visits. Also, we had visitors come, my brother, Perry and his wife, Amy spent a delightful lunch at Shelby's Bistro then explored Tubac and others visitors (Tom & Kathy & Brent & Molly) stayed with us and some of those visits lead to local Letterboxing activities.

In early April Susan had a diverticulitis attack and spent a night in ER. This was no fun and of course resulted in more doctors visits. Pat's ENT doc cleared him of the need for operation until we returned next fall. We went up to Mesa near Phoenix to attended a Letterboxing event. While in Mesa we went to the Butterfly Wonderland. This is like a bird atrium but for butterflies. There was hundreds of butterflies of all kinds flying every which way. Pat couldn't take pictures fast enough.

The Letterboxing event was being held at White Tank Regional Park west of Phoenix. This is a lovely place in the desert with good sized mountains as a back drop. We attended the event with our friends Brent and Molly, staying with them in their RV for the weekend. We found many letterboxes that were planted for the event.

Nearing the middle to end of April the cactus start blooming in the area, our place too. We went and visit the Green Valley Arid Garden. It's always fun to walk through this garden and see what's blooming.

We were so busy with everything that it was nearly the end of April and we realized that it was time to pack up the RV, close up the townhouse and head north. We both wrapped up our club activities and projects by the end of the month. We arranged for the townhouse caretaker and were ready to go.


We woke up the RV loaded the last remaining items from the house onto the RV and headed to Phoenix. Our grand daughter Zenaiyah was having her 3rd birthday. We had a nice visit and birthday party too. We also visited our friends Brent & Molly in Mesa and did some LB with them.

Next we traveled to Lake Havashu State Park, in Lake Havashu City, Az. We spent a few days there exploring the area which included the famous London Bridge across to an island. This is the real London bridge that was purchased in England, dismantled piece by piece, tranported from London to the site here in Arizona and reassembled here. Quite and interesting sight. We took a pontoon boat ride to the "Copper Canyons" on the lake. In the past copper mining was viable up one of the canyons, now of course its flooded and the mining has stopped long ago. One of the old mines was repurposed by a family of owls. We also went hunting for the local Letterboxes and found Sara park just out side of town to explore.

We left Lake Havashu and headed north this time going up through California. Not our favorite trip. However we stayed one night in Lodi and were able to connect with Pat's brother, Mike, his wife, Mary and his family for a dinner at "MooMoo's" burger joint. We completed our trip north in Vancouver, Wa staying at our friends Tom & Sue's, in their driveway.

We commenced seeing family and friends and Susan had doctor visits planned ahead of time. Near the end of the month, Susan had planned a visit to see her mother for her 99th birthday. So off she flew! Pat remained behind to take care projects and his doctor visits.