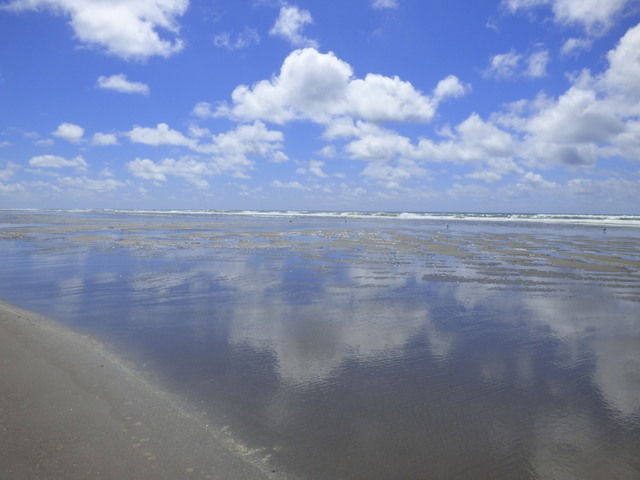 At The Beach on Longbeach Peninsula Washington

Susan soon returned from visiting her mother and helping her celebrate her 99th birthday. We both had doctor visits to be taken care of, we both checked out ok and grand kid little league games to attend and a couple of birthdays to celebrate, so our visit extended on into June.

When we stay in the Portland area we have some super duper friends (Tom & Sue) that allow us to "Urban Camp" in Vancouver, in their driveway. It's a complete full service camp ground with full hookups (water/sewer) and free WiFi, its hard to beat or turn down when offered to stay. Along with other urban campers in the other driveway, the parents of one of the hosts also live there.

Tom's mother had been in failing health for some time. We all knew and loved Grace as a friendly, spunky, feisty and sometimes stubborn person. It was heart breaking for everyone to be in attendance while she slowly slipped away. We all knew she was finally at peace early one mourning when we were notified by the family of her passing and the usual people showed up to take charge.

All of us still had to go on with our lives and therefore we wrapped up our visit by visiting a few family members and friends we hadn't yet seen. We visited Ray and Anne who treated us to a boat ride on Lake Oswego, which is near their home. Ray had restored an older run about and wanted to show her to us and take a trip on the lake. We stopped for lunch at one of the water front haunts on the lake. We visited Chris and Kim at their marina where they live abound their boat, we cruised with these folks in 1999 and 2000, they're getting ready to do it again in a couple of years. Finally we said our good byes to our Vancouver friends and then headed out to our property at the each.

If you've ever neglected your yard for a long period of time you know that there is lots to do once you arrive and get settled. This year was no exception.

We managed to get the place ready for our 4th of July party. We had folks show up in their RV and tents to camp, some that came and stayed with friends and others that came over from their place to visit. We had a nice day visiting and playing games and then had a pot luck that was on the 3rd and then we repeated it on the 4th put this time the pot luck was held at our neighbors place where we joined their crowd of visitors and another feast that couldn't be bet. Later we all went off to see the Longbeach firework display which is out over the beach. We and several thousand folks who also brought their own fireworks display saw a spectacular display of pyrotechnics. Alas that concluded the party.

July continued to unfold with a Letterboxing Event (Exploring the Seas) that was held at Fort Stevens State Park in Warrenton, Or. (just across the river) This was a three day event and provided much fun meeting new letterboxer's and searching for all the intriguing hiding places of the letterboxes. There were other letterboxing opportunities around the area that we took advantage of with our friends Brent & Molly.

We traveled to Portland for Pat's eye doctor visit and the Mt Hood Highland Games. Susan's son Steve participates in these games, this event usually results in a family reunion. This year was no exception.

We had visits from both grand children at the beach (but not at the same time). We also had our friend Gloria from Texas (ex-PDX/ex-boater) come out for a visit.

We made final preparations around our place for the August family camp out.

Over all July turned out to be a busy month at the beach.

The first weekend in august is when we have our family camp out. This year we had 16 members attend. It's a three day camp out for those that can stay for the whole time. There's always yard games to be played, beach visits, sitting around visiting with everyone, watching the young kids playing and plenty of food. We celebrated 2 grand kid birthdays, Owen & Eleanor born a week apart. There's gifts , kid games, culminating with a pinata and of course cake. A good time was had by all.

The next weekend we went up to the Whidbey Island Highland Games. This time not only did Steve participate, his daughter, Jamie, also took part in the games. It was fun trying to watch each persons event attempts when they were at different times and across the field from one another. We stayed in Everett and took the fairy over to Whidbey Island and back. All in all it was great fun.

We had yard work to keep up with and this year we needed to leave the beach earlier as we had to get to Texas for a wedding. We were also sorting through our stuff in the shed and to determine what to take south in the RV. We spent an afternoon at the kite festival and several nice afternoons touring the area.

All to soon it was time to close up the beach base, load up th RV and head to Cathlamet, Wa. for the Annual Mexico Cruisers Rendezvous. This event is made up mostly of ex-boaters, a few still have a boat though. Some come for the day, others bring their RV's (aka dirt boats) and stay the weekend, and others find an available cabin, yurt or couch to crash on. This is what our friends Herman & Nancy did, we invited them to stay with us. The time is usually spent visiting, touring the town or taking a side trip to the Friday market on Puget Island. While others play cards, nap or just enjoy the beautiful scenery from their deck chairs. Saturday is the pot luck of all pot lucks and everyone has to try at least a little bit of everything. Sunday it was time to pack up and head to Vancouver. We had a RV service appointment setup that we needed to be at on Monday August 31.