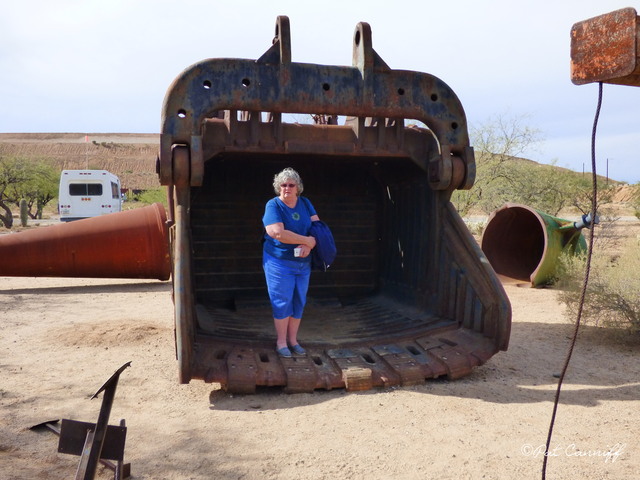 A small old shovel at the mine tour Visitors Center

We had left our new Sun & Moon garage door ornament hanging up while gone over the summer. It took a real beating and had started to show signs of rust. Susan decided that we needed to refurbish it and rehang it back up. This turned into quite a job what with getting the rust off and priming it and then hand repainting the brightest colors. The hanging mechanism was hard to work with so that got a fix too. Then it was rehung. Muy bien now!

Our first visitors of the new year were our friends, John and Marilyn. While they visited they wrapped up their periodical doctor visits before heading back to Mazatlan. The night before John & Marilyn were to leave we had our fiends Herman & Nancy over for a farewell dinner.

After John & Marilyn had left and Tom & Kathy had arrived. They had left their camper in a near by storage area last fall when they returned to the NW for the holidays. In the mean time Susan I resumed our schedules of attending our various clubs and doctor visits. While we were busy Tom & Kathy readied their camper for travel. We all took a break from our tasks and visited the local Asarco Mineral Discovery Center and took their mine tour. This is an open pit copper mine and ore processing facility. They mine copper, gold and silver, it comes out of the ground in chunks of rock. They are dumped into a crusher and reduced down several times before being given a nice bath in the appropriate chemicals. Very impressive and large operation.

Tom & Kathy took their camper on a week long shake down campout to Lake Patagonia State Park. While they were gone we visited and played golf with Pat’s brother Jamey and attended our usual club activities. When Tom & Kathy got back from their campout we had reservastions to see the “Two Amigos” at The Gas Light Theater. These productions are a classical slap stick comedies. They are ridiculously hilarious and they usually get the audience involved too. Did I mention they also serve food and beverages including those for adults! And Oh those shakes OO La La!


During the winter months the camera club puts on two evening events each month. One is called Showtime and the other is called Travel log. Each of these events present programs created by the camera club members. They are usually mixed media presentations with photographs, video and music. We try to go to them each month. It’s fun to see people’s creativity and to share their travel adventures. When we can we take our friends as guests.


We made one other outing with Tom & Kathy before they left the area. Pat had seen on the news that a new USS Arizona memorial had been opened at the university of Arizona campus. It consisted of an out line of the ship on the grounds and a memorial listing all the folks killed on the ship. There was also a small exhibit room near by that held more memorabilia. It was a very nice tribute to lives lost on December 7, 1941.

During the remainder of the month we visited with family and attended dinners out at friends homes and restaurants. Attended to club activities, classes and doctor appointments. At the end of the month Jamey and Tina left Green Valley in their fifth wheel trailer/truck and headed to Florida and then north back to Minnesota for their summer.


In February we continued with our club activities, extra classes and various presenttions.


We caught some sort of a bug that took a few weeks to kick.


Our friends Brent & Molly came down from Mesa for a week visit and so we could all attend the annual Letterboxing event. This year it was held in Colossal Cave Park. The day before we had a pot luck dinner at one of the event hosts home. Then the event day we scrambled all over the park collecting hidden Letterboxes.

One day we went on a day road trip to visit our friends Ed & Randi in Whetstone. We had a great visit and on the way home we found a couple of Letterboxes along the way.


Pat spent some time cataloging some old charts and reference books left over from Perpetua’s inventory. Our intent is to try and sell them or recycle them.


We spent time visiting with our neighbors/friends at the weekly Saturday evening happy hour/gab fest on the Pairasio Place cul de sac island and also by attending or having dinners together.


The month ended without a bang.


Pat’s daughter Jenica and her three kids arrived the first weekend in March. They came for a visit and together we’d go up and visit the Grand Canyon over the grand kid's spring break. Before we took off our neighbor requested help from a IPad expert (Jenica) She helped her get her tablet updated and working properly again. We spent the afternoon in the swimming pool.


Our first day took us all the way to the Grand Canyon. North of Phoenix we stopped at the Montezuma Castle National Monument. This monument is just off interstate 17 a couple of miles. It is an exhibit of the Sinagua people who inhabited this riparian "oasis" along Beaver Creek for over 400 years. They farmed the land along the creek and built homes into the side of the near by cliffs. It was abandoned over 600 years ago, for reasons unknown. It’s is nestled in a lovely valley with a visitors center and paved walking paths throughout the park.


We arrived at the Grand Canyon late in the afternoon and went straight to our hotel the Yavapai Lodge, located in the Canyon. The hotel has a cafeteria style restaurant with decent food, where we ate several meals during our visit. Next morning we got an early and went to the rims edge overlook in the Canyon village. Of course everyone's jaws dropped when we took in the view. Did I say that the temperature was near freezing with snow on the ground! Soon the cries for breakfast made their voices heard and we set off for the near by El Tovar Hotel Dining Room and Lounge. As our group paraded in we suggested a window seat as this was a first time visit (for some of us) to the Canyon. This resulted in a great view of the court yard and the Canyon beyond. The food was excellent and we all had a good time.


After breakfast we hopped on a trolley out to the visitors center. There we looked at the exhibits and gathered information on what to do. We sat down outside and planned our day. We decided to spend this day heading west a far as the trolley’s would take us. We figured out which view points we wanted to stop at and off we went. We took the car back to our hotel parking lot and hopped on a west bound trolley.
We had a wonderful time stopping and exploring each of the view points on our list. The hardest part was maintaining our cool, while the girls tried their darnedest to get as close the viewing edge as is possible. In order to get to Hermit’s Rest, we had to get off the main trolley line and walk a quarter mile to another trolley pickup station. Once on the Hermit’s Rest trolley there are several viewpoint stops along the way. We choose to see some on the way out and some on the way back. We had planned on lunch at the Hermit’s Rest Snack Bar but when we arrived all the electricity in the park was out. So if you had exact change and were ok with snack food then you could have a bite to eat. (We all had something) We made our way back to the trolley stop and started our return trip. We did stop at a couple of view points we’d missed on our way out. Once back to Canyon village, we the visited the Kolb and Lookout Studio’s before boarding the trolley that would take us back to the hotel parking lot. We were all very tired and quite hungry so we stopped an ate at the hotel restaurant for dinner. Across the parking lot was a mini mall so we explored it and got some “snacks” for later before returning to our rooms.


The next day we headed east 25 miles as far as you can drive, without leaving the park, to the Desert View Watchtower. This attraction stands proud at the East end of the park. This structure was designed by Mary Elizabeth Jane Colter. The architecture of the ancestral Puebloan people of the Colorado Plateau served as her model. This particular tower was patterned after those found at Hovenweep and the Round Tower of Mesa Verde. From the top there is a commanding view of all of the Grand Canyon. From here we worked our way back to our hotel and stopped at several viewpoints. We went back to the mini mall for lunch and then continued visiting viewpoints and gift shops.


After a pit stop at our hotel we drove into the near town of Tusayan. There we explored town and ended up having our last Grand Canyon dinner. Back at the hotel we had to pack and turn in early.


The next day we had a quick breakfast in the hotel and then loaded up the car and started our journey to Green Valley. We made a stop in west Phoenix to visit Pat’s youngest daughter and her family. The had a time visiting their cousins. We took the opportunity to celebrate Ellie Carlley’s birthday. So cake and ice cream was served to all.

We made it back to our townhouse late after stopping for gas and dinner. Their last day was spent learning to paint using alcohol ink. The next day we took them to the airport and off they went back to Texas.


We resumed our normal club activities, went to the pool for R & R and some pool walking exercise. We visited with friends and awaited the arrival of our next guest. Pat’s old work friend, Maggie arrived for a 4 day visit. We showed her around GV, shared a meal with some friends and went to a neighborhood pot luck. Then off she went back to the NW.


Our next group of visitors showed up about a week later. Susan’s pregnant granddaughter, her husband their 3 children and one dog. It got crowded real quick! These folks were a driving tour of the west and southwest. We visited with them, let the kids run off some steam at a near by park and took them Letterboxing.

They also had some friends in Phoenix that they could only visit on the weekends and left after a few days to do that, and then returned for a few more days before they headed out, heading back to the NW.


We on the other hand as they walked out the door we’d already packed up and drove up to Mesa to visit our friends Brent & Molly for a fun Letterboxing event weekend. The event was held on Saturday so on Friday we went to the Tempe 6th Street Market.

Then on Sunday we headed back to Green Valley, after stopping at Pat’s daughter, Lydia’s to visit with her and the family.


Well that rounds out the month of March and starts off April at a Letterboxing event.


Thanks for visiting our blog. More to follow for sure!