Michael, Bruce, Patty and Gloria enjoy a sunny sail in the Bay of Islands

After a week or more of glorious end of summer sunshine, the weather has turned. It is a wet and blustery Monday morning, a Vancouver style rainy start to the week. The boat is heeling at the dock, every so slightly as the easterly wind plays its tune through our rigging. It is still warm though, we throw a raincoat over our shorts and t-shirts to go anywhere, and we are still wearing sandals. Just like Vancouver, the rain is what makes this place lush and green, so you know sooner or later it has to come.
Last week we had two sets of visitors who enjoyed some pretty nice North Island weather with us. We arrived back to Opua ahead of the guests, and worked pretty much non stop on Paikea Mist in order to get her back in the water and in some shape for our company. We put her back into the water on Friday in time for the arrival of my sister Patty and husband Bruce on Sunday. We had a short but terrific visit with them. We took the car ferry across to visit the nearby historic village of Russell, where we enjoyed live entertainment while sipping brewskys on the outdoor patio of the oldest hotel in New Zealand. The next day we sailed out to Urapukapuka Island, where the water was warm enough for swimming and the hiking as awesome as ever. Next up were our friends Allan and Alison, from S/V Fly Aweigh. After a few more maintenance items were crossed off the four of us pushed off for a relaxing Bay of Island Cruise. On our way to our first anchorage we were greeted by 3 dolphins who swam with us all the way into the anchorage. Allan was even able to swim with them at the anchorage. They were very curious and playful and so exciting to watch. 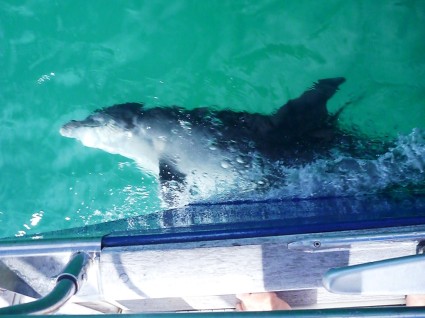 Allan and Alison are now on their way back home after an amazing adventure across the Pacific, culminating in the successful sale of their boat in Australia and a camping trip around New Zealand. We will miss their cruising company, but look forward to them joining us at future destinations.
I can't get over the amount of maintenance work we have done since arriving here. In an effort to give you an idea of what goes into maintaining a well maintained, now ten year old boat I will try to list them. Before we left I really truly believed that we would be the exception to the whole adage about cruising is repairing your boat in exotic places. After all, our boat was so well maintained...how amusing...here's the list in no particular order...
Replaced Battens- one in SanDiego, all of them in NZ. We now have a back up set to store inside our boom.
Sails -checked and repaired for areas of wear and tear- San Diego and New Zealand- minor repairs only
Checked Freon in Refrigeration System-Freezer needed a boost
Complete overhaul of generator (800 hrs) Serviced and checked in Vancouver before we left, we noticed that it was overheating. The heat exchanger was clogged so badly it was replaced. Head gasket replaced. Much to my delight and enjoyment of the said yacht, in order to repair the generator, the entire saloon table, and bench seat it sits in has to be disassembled, making Paikea Mist a huge work zone, with the generator pulled out and sitting where the table ought to be. While it was out we had the base it sits in repainted (it was showing signs of rust) and we also replaced the engine mounts. 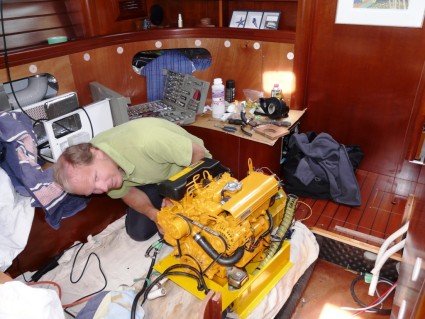 Good thing Michael knows his generators!
Engine Overhaul: Michael did a complete engine overhaul here in NZ. Again, the engine was serviced before we left Vancouver, and properly maintained over the course of our trip. Same conditions as above, although table and seats are still intact, thank goodness. Replaced all injectors, O-rings, and other bits and pieces. Motor runs smoother than ever now, no leaks (touch wood), but still our pesky white cloud is trailing us. So far no-one we have met has been able to solve this 'problem', although in Tonga another cruising boat radioed us to check whether we knew we had a trail of white exhaust. Hmmm, thanks for that.
Rigging- we had our rigging checked in Vancouver. On the crossing to the Marqueses we had to make emergency repair of the baby fore stay and one of the secondary stays on the spreaders. Michael repaired this while sailing using spare rigging material and clamps. Michael had the necessary parts shipped to Pappeete (marvellous thing the SSB radio is) where he did a proper repair. We had our rigging inspected here in NZ and replaced another secondary which was just beginning to show signs of failure. The rest of the rigging was given the A Okay. The guys here taught us a heck of a lot about rigging, tensioning and inspection which will be very helpful to us in the future. In retrospect, we don't feel the rig was really tuned well in Vancouver, despite assurances that all was well.
Anchor Windlass Repairs- We bought a brand new anchor windlass for the trip so that we would NOT have to worry about it breaking down. Ha! Ha! It is the style where the motor is mounted below the deck, so we mounted it the only place we could fit it, nestled into the corner of the top side of the anchor locker. As we arrived to Hiva Oa, the anchor windlass would not work! Michael discovered that the connections were corroded, and repaired it on the fly. We now try to remember to turn off the breaker when it is not in use. By Tonga the paint job on motor itself was beginning to flake and rust. Apparently they do not design these items to endure any exposure to a sea environment -DUH! Here in New Zealand with access to knowledge base and products, Michael took it all out and redid the paint coating, this time using materials which would withstand the conditions it was meant for! (Incredibly when we sent photos of the unit to the manufacturer the reply was that we had to install it somewhere where it wouldn't be exposed to moisture- go figure).
Water Maker membranes: Our water maker was on our boat when we bought it. Replacing water membranes as required was a dreadful job, due to the design of the system. In encouraging one of the brand new expensive membranes into place, Michael managed to damage it. Here in NZ we bit the bullet and had the membrane system replaced with a pressure vessel that is user friendly. We just made our first cup of water with the new membranes and it was delicious!
Inverter Failure- replaced in Mexico, at that time we installed a back up Battery Charger! Next....
Battery Charger- failed and replaced in New Zealand. Our friends on Visions of Johanna experienced a devastating fire in their engine room, which was deemed to be the result of a flaky battery charger.
Water Heater- replaced zinc rod (corroded beyond recognition), and serviced.

There are probably more items that we have left out, but I'm sure you get the picture. It is a constant battle to maintain and repair a cruising yacht. That's the simple truth. We are not alone in this fight, every boat we have met has had to do a long list of repair jobs along the way, even those that are brand new. And those exotic places don't always seem so exotic when your home is in a state of disrepair!

So it's a rainy Monday and Michael is working on soldering the last little electronic transistor onto the control panel (which was inadvertently damaged while repairing the generator) and then hopefully we have our generator back. I've been going through all of our stores and starting to provision for our trip back up to the South Pacific. We have decided that we will sail to Fiji, in order to be able to fly back home for our nieces wedding in June. Before that we hope to sail down to Great Barrier Island which lies to the west of Auckland to do some local cruising there too!