In a break between rainstorms, I take a brisk walk up the hillside that frames the Opua and the marina far below where Paikea Mist is moored. A maple tree stands near the top of one of a series of short steep hills, a momentary shaft of sunlight catches its golden and red hues. Fall is in the air. Days are getting progressively shorter, and the storms are lining up one after another. My thoughts fall to Christmas, and what I should be preparing and purchasing for my loved ones. My mind fumbles in a northern/southern hemisphere kind of confusion, as I try to figure out how many more days till Christmas. That's when I realize what the problem is. This is the first time in my life that I have moved from Spring through Summer to Fall in the southern hemisphere, and it befuddles my internal clock and sense of things. I remind myself that here in the southern hemisphere there is no Christmas associated with winter, and wonder how on this upside down part of the earth these folks can make it through the short dark days of winter without something to look forward to.

Fall here is much like our November is at home, just a little warmer. But as any Kiwi can tell you it sure can 'blow a bit'. The raging of the big lows that pass by on a regular basis at this time of year tell the story; you are on a small island in the middle of a big ocean. We are in the midst of our third storm in as many weeks. The wind is howling through the marina today, carrying with it biblical rains which pelt across the bay at severe angles driven by the wind. There is an entire fleet of boats waiting, lines tugging hard on the docks which heave up and down, halyards knocking in the wind, and masts whirring wildly. We all wait for the same thing: the weather window to allow us to sail out of the upcoming New Zealand winter and into the warmer tropical climes of Tonga, Fiji and Vanuatu.

The Island Cruising Association hosts a rally which was meant to leave yesterday. They may have to wait a while, as the low that is riding off the northwest coast of North Island and sliding down in a southerly route is packing a serious punch. Wave height is estimated at 7 meters, and winds well above 50 knots. What we see here in the Marina is but a minor off shoot of the 'real' weather out there. So even though it is a bit dull sitting inside the boat hour after hour waiting out yet another storm, we are quite content to be dock side. The last two storms found us at anchor, quarantined inside the boat, unable to even take the dinghy to shore. With the SE winds gusting up to 45 knots in the protected anchorage on the northwest side of Waiheke Island, the fetch was enough from the shore that we had a good chance to develop our sea legs before our upcoming passage.

In between the storms we have still had time to marvel, New Zealand is such a place of wonder. On our way across from Waiheke to Auckland Harbour a solitary shag followed our wake. Repeatedly, he flew up beside the boat, landing so close that we had a chance to examine his landing technique, which was the equivalent of sticking his feet out like water skis in front of himself and then braking fiercely with his tail. Once he came to a stop alongside us, he pushed his head into the water to dive down below our boat and through our wake. He was fishing! We watched and marveled as he surfaced several hundred feet behind the boat, swallowed his catch, flapped his wings to get airborn and repeated the obviously successful process over and over again! 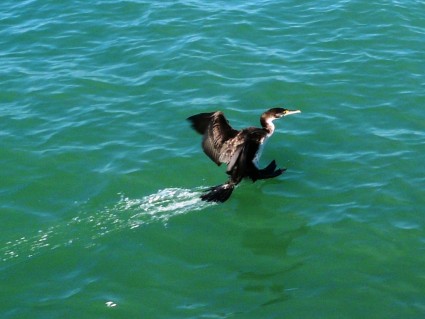 Later that week, we anchored behind a craggy notch on the northern side of Goat Island, one of many protected marine park islands. We were immediately treated to sightings of Orcas feeding in the shallow waters nearby. As we pulled back on the anchor, I watched as a multitude of fish hovered below our hull. We dropped into our kayaks and paddled as the whales swam through the small pass between the island and the mainland, gorging as they swam through shallow passage against the current. As they fed, they scooped fish from the water, keeping at or near the surface most of the time. When the family of four eventually continued up the coast, we took to exploring the seacaves which have been slowly etched into the sides of Goat Island.

Entering into the largest cave with tide at midway point was particularly exhilarating. The ocean swell pushed us up and into the largest of the caves and carried us like drift wood into its back reaches, 2-300 feet beyond its entrance. Hollow echoing booms filled the empty space around us as water surged through hidden channels.

As we paddled out of the cave and around the nooks and crannies of the rugged island the sun shone through the huge Pohutakawa trees which framed the rocky cliff sides high above us, their mighty roots exposed by wind and wave, still searching for a good hold.

Ah, I just want to hang on here too, beautiful as New Zealand is. If only it weren't raining.