The Image of Hope Look into those eyes and tell me what do you see?

A large muscular man, Suli sat relaxed, crossed legged on woven mat that lay upon the simple slated wood floor . Sporting a fresh t-shirt and shorts, he had already changed out of his pressed white shirt and sulu * he had worn to the church service we had attended together earlier that day. With a mischievous yet somewhat guilty smile on his face, he gently explained. "You will begin to feel itching in your throat- do not worry, it is the taro root leaves, they cause this to happen, it will not last". My mouth was already exploding, as if I had eaten a fist full of thistles, not the delicious leaves cooked in coconut and onion. (* a sulu is a traditional Fijian man skirt)
Relieved to know that at least I would not be expiring soon in some state of allergic coma, I still felt anxious as the constriction followed the leaves down my throat. Suli had warned me (mind you without full explanation) that I may not want to try the taro root, but in my adventurous culinary spirit, I went ahead anyways. As I was concentrating on keeping my composure and willing myself not to panic, Suli also ate some of the otherwise untouched plate of rolled leaves, I suppose to share the grief with me. His eyes grew large as he went through the same momentary pain as I. Around the woven floor mat, laid out with a traditional Sunday feast, others laughed and giggled at our predicament.
Dozens of plates of food lay beautifully arranged on the large mat, easily enough to feed the family several meals. Suli had been spearfishing on the reef the day before, and a wide variety of fish laid freshly seared on several of the plates. Others were full to the brim with rice, cassava, pork ribs, and a particularly delicious dish of steamed spinach in coconut and lime. In between the platters lay fresh lime wedges, salt and hot chillies for seasoning, as well as juicy wedges of freshly cut watermelon to quench thirst between courses. Suli sat at the head of the floor mat, and delighted in sharing the food with us and his extended family. Indeed a total of nine adults and four children ate their fill and yet there was still many plates left untouched. In a perfect example of modern day "eco" self sufficiency, all the food (with perhaps the exception of the rice) came from the island itself, and was prepared over an outdoor oven stoked with coconut husks and wood from fallen trees in the surrounding forest. 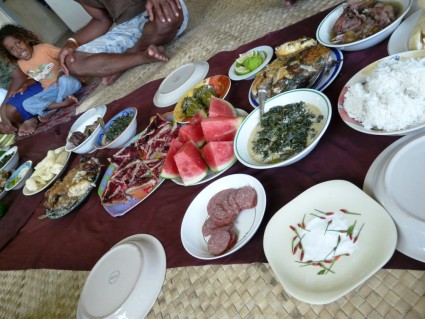 Sunday feast laid out on the mat, just before grace

The previous afternoon we had presented "Sevu Sevu" to Kameli, the headman of the small village which rests upon the edge of the calm bay inside of the fringing reef that surrounds Makongai Island. Sevu Sevu is an ancient ceremony of giving a bundle of Kava root to the headman or chief of a village. The chief then welcomes the visitor (whether Fijian or western, the tradition is the same) and allows full access to the village and surrounding waters. The root is pounded and then made into a drink. Men in Fiji drink the ceremonial Kava in the evenings, and they develop a yearning for it! The effects are soporific, lulling them into a restful state. Later that evening when Suli came to the boat to let us know that he would pick us up by boat for church the following morning, we were happy to hear from Suli that the kava we brought was exceptionally good.
After the meal, Suli sat on the rickety steps off the porch of his small house shoulder to shoulder with Michael. They were pouring over a book which Suli shared with obvious pride. Born on the island, his parents were residents at the time that the island was still a "leper colony". 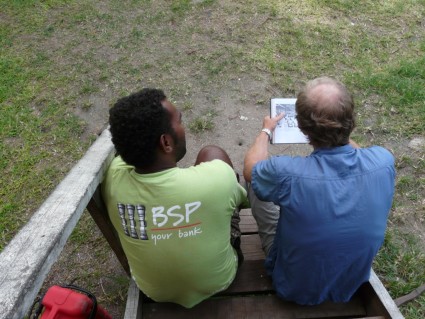 Shoulder to shoulder
Surprisingly, the small hard cover book was entitled "Makongai- Image of Hope". Hope is definitely not the first idea that comes to mind when told that the entire island was used to quarantine "lepers" as early as 1911. Kameli had already informed us that as many as 5000 patients once lived on the island. The colony existed until 1969, after the cure for leprosy had been found, and the last residents finally sailed away from the island.
When it was time for Suli's afternoon rest, he graciously offered the book to me to take back to read on the boat. I read into the night, amazed at the incredible history of the island. Since the biblical times, leprosy was known as a death warrant of the worst particular kind. In the early 1900s when the number of cases spiked throughout the Pacific Islands, the disease was dreaded, and those who succumbed were outcasts. All sorts of cures were attempted, including hanging the victim upside down over a fire made using the branches of a poisonous tree!
In a resolute attempt to control the spread of the disease, the Fijian government determined that they would use an entire island for the purpose; Makongai Island was the chosen one. Lepers were literally scraped up from backrooms and alley ways where they had been left to rot. One of the worst victims exuded an ungodly stench that wafted for a quarter of a mile or more. Many had been ostracized from their family and friends and had given up any hope of a better life.
These remarkable individuals were the very fabric and sinew which was to weave itself into the magic of Makongai.
The colony was judiciously run by a nun by the name of Sister Mary Agnes. She was an exceptionally strong and driven woman who knew what she wanted, and people knew it would be best to follow her wishes. For decades, Sister Mary Agnes and her fellow nuns petitioned for and provided nursing care to the many people brought to them. From the start, they treated them as humans first, encouraging them to take pride in their surroundings, by looking after their own food gardens and decorating their huts in their traditional manners. Under their faithful guidance, the colony flourished. Throughout the island various villages were set up, a separate village for Fijians, Indians and Solmonese were established where people were encouraged to follow their own traditional customs. Yet despite this separation by race, the magic of hope evolved from the sense of family and oneness which unfolded on Makongai. All reported a state of equality and brotherhood, which outstripped any differences in race, culture or hierarchal background. At her request, Sister Mary Agnes was buried in the graveyard on Makongai Island, just beyond Kameli's small village. Even today her headstone is readily identified, surrounded by the more simple crosses of almost 1000 souls of those she cared for.
As people were brought to the island for the first time, they were often feeling alienated, ashamed and afraid , having been uprooted from their normal lives and routines by the disease. They did not know what to expect, yet when they were met at the docks and graciously welcomed to the island by other upbeat residents their outlook began to change. Indeed, they were given hope, and a spirit grew amongst the islanders that is rarely produced in other more typical settings we human beings find ourselves in. The approach was so successful that the colony was eventually opened up to the entire South Pacific, and took those inflicted from as far away as Tonga, the Solomons and even New Zealand.
These hardy islanders were amazing in their resiliency. The sisters saw to it that their life was rich and meaningful, even in the face of the often painful disease they battled with day in and day out. They held a wide variety of cultural festivities which they shared with each other, celebrated Christmas, went to school, learned new trades, made custom furniture to very high standards, stitched intricate and beautiful needle work pieces (sometimes without the use of fingers to push a needle through) built roads, and even a movie theatre on the island.
Residents were encouraged to keep up with the news of the world, and ironically it was one of the patients who first learned of the cure for his own infliction. Reading a scientific publication from North America, he was excited to hear that a sulphite based drug was being found effective in controlling the bacterial based disease. The islanders watched as the miracle drug cured one patient after the other. Upon eventually leaving the island many expressed a heartfelt sadness. In fact, when relapses occurred, they often rejoiced at the opportunity to revisit their 'family' on Makongai. 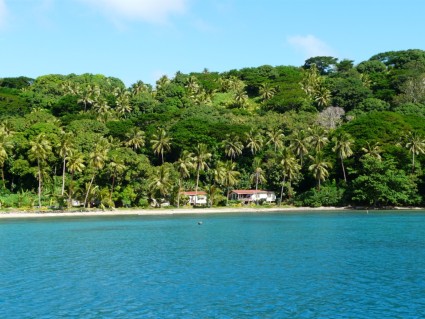 Kameli and Suli's village has six small homes close to the edge of the sea, the island is now home to 75 people in two villages

After spending our own delightful but oh- too -short time visiting with the Makongai islanders, exploring their island and reefs, we can't help but feel hopeful for the island, and the future of its people. We've had the unbridled opportunity to watch the villagers go about their daily routines, and been fortunate to take part in some of them. We've been shown their giant clam recovery program and discussed how they spawn and culture the tiny clams into specimins large enough to deliver to various reefs throughout Fiji, where each one is carefully placed in the hope of its survival. In the late afternoon we've watched parents playing with their children at the water's edge, the children shrieking in delight. In their small open windowed church we sat engulfed by their voices, both young and old as they sang their hearts out. Twice during the church service separate individuals addressed us in English, blessing our journey and thanking us for coming to their island. Thanking us?!!
Such is the overriding and I suspect everlasting spirit of Makongai, which lives on even today in the generous nature of such people as Kameli, Suli and others who hail from all parts of Fiji, who warmly welcome visitors to their island. Like those who have come and gone before us, we too were reluctant to leave Makongai. 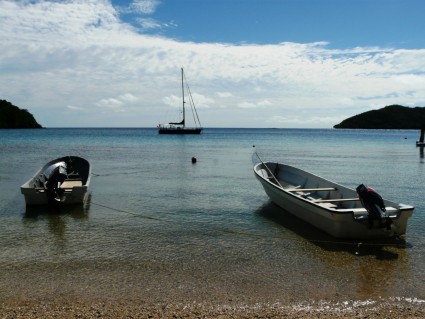 Paikea Mist at anchor in front of village, ahh....how sweet it is, and how hard it is to leave