The huge slabs of volcanic rock looked like they had been pushed from below by the hand of a giant, forming massive concentric columns that jutted out of the steep mountain that towered several hundred feet over Yalobi Bay. As we moved towards the anchorage I took my binoculars in hand to see if I could make out a trail to the peak, but could not see an obvious route. With its craggy fringe of mountain peals, and shadows of light playing across the ravines and valleys, the island was reminiscent of some of the Marquesan anchorages we visited last year. 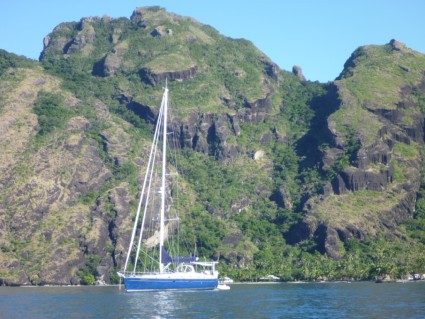 We dropped the hook in the protection of the calm bay, and with the anchor set, we both promptly dozed off into a deep mid morning siesta. We hadn't been given much opportunity to sleep the night before. Even though our anchor was firmly set in the beautiful bay at Navandra it was much more like a night at sea than anything else, so this calm lulled us to sleep quickly.
When we slowly pried our sleep encrusted eyes open again, we had a bite to eat, and then made our way into the small village of Yalobi to give the chief his required Kava in a sevu sevu ceremony. Once the ceremony and the complicated set of open handed clapping was complete, the chief gave us permission to explore his village, beach, reefs, and "do you want to climb the mountain?" he asked? I was nodding my head even before he finished asking the question! We were escorted by a friendly villager to the head of the trail up the mountain. The "trail" was wide open, and followed large expanses of exposed black slopes in a spiralling trek to the peak.
The volcanic rock provided excellent traction up the steep gradient. Within an hour we were as high as we wanted to be, with a birds eye view of the bay, its reef and the island itself. We never seem to tire of taking photos of Paikea Mist in all these exotic locations, so our camera was busy yet again. We watched from above as the villagers went about their daily routines, carrying firewood back along the beach and tending to their cassava plantations. 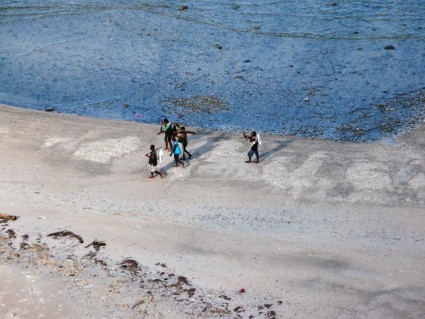 Eventually we made our way back down, finding the route down was slightly more complicated than the way up, but eventually we dropped into the right ravine which brought us back down onto the sandy beach.
A couple of cruising days later, another bluff hanging above the anchorage called out our name. I've named it 5 Point Hike, for reasons I will reveal shortly. We had spent the morning in the nearby pass, doing a couple of exciting drift dives as we searched for the Manta Rays which frequent the pass during high tide. With no mantas, we were looking for our next activity. Michael planned our route from the boat up to its platform overlooking our anchorage. I was hesitant, the slope looked incredibly steep, and I am just not a natural climber, unless that is, I am able to use all four limbs to hold on as I pull my way up.
Michael's route didn't exactly pan out when we got off the beach and into the dense underbush, and he had to do a lot of coaching to get my hesitant hands and feet to scramble up the slippery granite slope which was covered with dead tree limbs, dry leaves and other debris. Soon my sweaty hands and feet were covered in dirt, as well as small and prickly thistles from the not so friendly weeds we were scrambling through. Eventually we pulled ourselves up over a rocky ledge and could see the bluff platform beside us. As we crunched our way through the underbrush towards it, we came to a ...trail! The trail led us out to the bluff, overlooking our anchorage and then out towards " No Manta Pass". 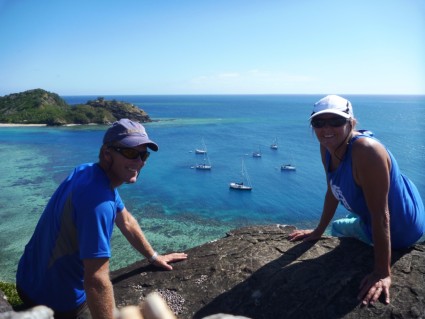 Top of the bluff above our anchorage
We decided to follow the trail back in hopes that it would eventually lead to the beach where our dinghy waited far below. The trail lead us out over three more peaks, looking out over 3 more beautiful rises where we admired the vistas over these points of land. (By now you may have counted- 5 points- but wait there is more to the name!) Unfortunately the trail eventually petered out into thickets of underbush, natures substitute for the "Dead End" sign. We backtracked to our original entrance, and started our descent down the steep, slippery slope we had earlier pulled our way up. At first the going was easy, with lots of trees and vines for hand holds. Later the rocky slope was much more exposed and offered only crevices to nudge hands and feet into. The rocks were hot from the tropical sun and hand holds could only be held briefly. Eventually it was so steep and slippery I ended the 5 Point Hike, on all "5 points", using both hands, feet and you guessed it- my bum to secure my way back down. Not exactly graceful, but it was yet another adventure completed safely!
Tomorrow we are hoping that "No Manta Pass" will reveal some manta rays!