Bull Shark at 25 meters -this was not taken with a zoom!

We first heard about the opportunity to dive with Bull Sharks via the cruisers grapevine. Everyone recommended the same company: Beqa Adventure Divers as being the ones to go to for the best shark dive experience. Beqa (pronounced Benga)Island lies just to the south of the large island of Vanua Levau, Fiji, and is encompassed by a fringing reef. A few years ago, a resort in the area got the idea of attracting tourist divers to the "Shark Corridor" which forms between the reef and the mainland, by encouraging the locals to stop fishing the reef. In return, they would recieve a sum of 20 FJD for every diver who went on a shark dive. With the locals away from the reef, the pelagic fish numbers grew, and the sharks returned in numbers, encouraged by regular feeding of thrown off heads and tails of a cannery in nearby Suva. Sounds gruesome- doesn't it. Well, it is a win win situation. The local village recieved 45,000 FJD last year alone, the sharks are increasing in numbers, the pelagics are numerous and humongous, and well crazy people like us get to see the magnificient Bull Sharks up close and personal while they are feeding, sometimes in quite a frenzy. 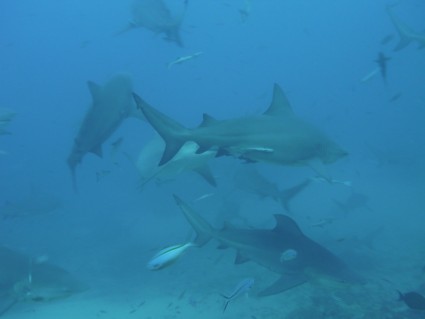 How many Bull Sharks can you find?

The package was a two dive deal- for just under 250 FJD, including the fee for the locals. The first dive started at 30 meters, where we kneeled on a ledge of coral in a hand built arena of sorts. Ahead of us, the local divers hand fed hundreds of huge pelagic fish, Bull sharks and the odd Tawny nurse shark. As our bubbles floated up above us, our eyes were pinned wide open as the Bull sharks began to swim in our midsts. Surprisingly, small reef fish floated in front of our masks, seemingly oblivious to the carnage going on around them. This brought such a surreal focus to the whole event! 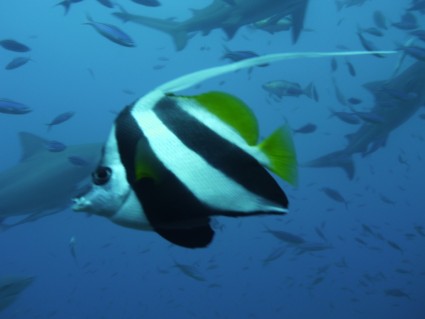 Yikes-What am I doing here?

From there we moved up to a higher platform where we watched Gray reef sharks take their share of the offerings. Finally for our 20' safety stop we watched as 'Papa", the famed local Fijian who knows some of the sharks by name hand fed Black and White tipped reef sharks, as the sun lit up the beautiful reef and its other inhabitants. 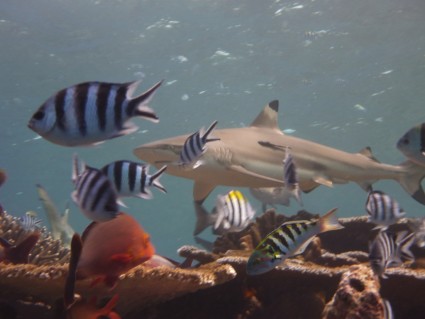 These sharks were close enough that their tails hit us as they pivoted around Papa for their share of the offerings.
The second dive was at 25 meters and involved a magnificient display of Bull Sharks as they gorged themselves on their more than fair share of the 600kg of fish the dive operators had trundled to the bottom and locked and sealed in trunks with openings enough to let the scent out ahead of time to attract them.
Although butterflies were scurrying in everyones stomach ahead of the dives, everyone seemed to agree that it was an awesome privilege to see these predators in action. Up close and personal, close enough to see the small cleaning wrasse attached near their mouths. One of the most frenzied feeders had a hook and line still attached to his mouth- imagine the fright that fisherman experienced!
I'm sure many of you will think this is just a crazy experience that you would never consider in a million years, others still will think it is contrived and we shouldn't be messing with nature like this. What do you think?
Comments
Newer Older
Contents