Loving Taveuni!
We arrived in Taveuni while the bogawalu (8 day winds) were still blowing, and tucked in behind the tip of the island near the small town of Matea. We had to put the stern anchor out as there were still some rollers looping around the point, and sending our mast waving uncomfortably back and forth. Once the stern anchor was deployed the motion was quite livable.

It was a nice treat to be back in 'civilization'. We went ashore and walked into town to the nearby store "Bhai and Sons" and were able to stock up on our grocery supplies, and buy icecream bars! After 4 weeks in remote areas with no stores, we were in need of a few things! The isles of the small store were brimming, and the selection of food was such that we opted out of going to the bigger MH store in SomoSomo, the larger town on the island. After running our food out to the boat, we took a taxi to see some of the nearby sights. Our driver, Tusela was originally from one of the small islands in the Lau group, so was interested in our recent voyage.

Taveuni is a stunning island, mountainous, lush and with a gorgeous coastline. A well built road runs along its waterfront and eventually turns into a dirt road on the remote side of the island.. First stop on Tusela's tour was the 180 meridian, and we all took turns standing on it! This is where the international date line passes, but in reality in this neck of the woods, it officially takes a big jog out eastwards to include Tonga in the same day as Fiji! 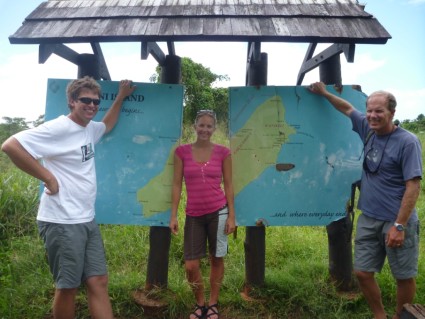 Michael and Kolby standing on either day of Kristine

We also visited the Catholic Church which sits on a beautiful perch overlooking Somosomo strait. The church is known for its beautiful stained glass windows and statues which came directly from France.

The same day (or was it the next?!) we hiked up to the natural waterslides. We knew we were getting close when we could hear the shrieks of the local kids who were playing there. When we came into the view of the slides and saw a series of plunging water falls and white water, even Kristine and Kolby seemed to pause and contemplate. I opted to be the camera person! The local kids demonstrated the slides, and it wasn't long before Kolby, Kristine and Michael were careening down the slippery natural water slides. It was great fun to watch the local kids taking plunge jumps into the pools, diving head first into the white water rapids and scampering up the slippery rocks like they were on dry granite. As for our participants, they looked a little bit like slippery eels trying to cross the river and climb the rocks! 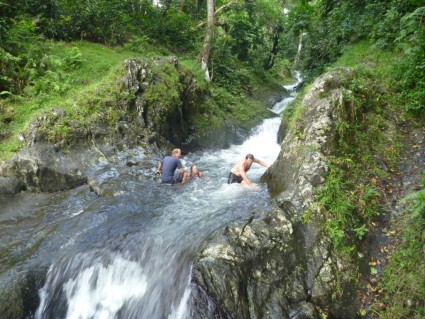 The river has quite alot of force and the rocks were very slippery- these slippery folks are clinging on!

Eventually they had their fill of excitement, and compared bruises. I must admit that the only thing bruised on me was my ego. I hated missing the action, but I guess I'm not as young as I once was and evaluate risks versus fun in a different light than yesteryear!

The next day we got up early and Tusela drove us 1 ½ hours along the bumpy dirt road to the Lavena Coastal Walk. The narrow dirt road ran alongside the ocean, through several remote villages, over tiny bridges crossing several rivers, and up steep grades to stunning lookouts. Once in the small village where the walk starts we were greeted in their Lodge. The lodge offers 4 guestrooms, with simple accomdation and Fijian style meals. We ordered a lunch for our return. The villagers make their income from the lodge as well as charging a small fee for the walk, which has a very well maintained trail the entire way. 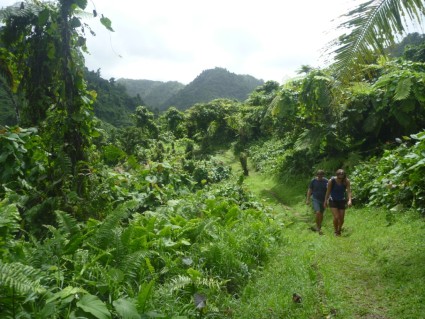 The coastal walk was stunning, and the waterfalls and surrounding pools and canyon were the most beautiful we have yet to see anywhere across the Pacific. The water was crystal clear and we could see hundreds of fish swimming through the smooth boulders and pools . We took the plunge into the refreshing water and swam upstream through the canyon, its walls draped in lush green tropical plants. We spent an hour or so frolicking in the pool, swimming under the crushing power of the water fall and riding its current before heading back to the village.

On our way back to the village, the tide had gone out exposing the large shelf reefs. The villagers were out in droves collecting sea urchins on the beach. Still others were collecting dry wood and leaves and starting fires on the beach to enjoy the delicacy. Around each fire several mats were gathered. With school out for two weeks, several families were enjoying their Fijian style picnic . We took the local bus back to Matea, and it was great entertainment watching people and their wares get on and off the bus at the various village stops along the way. Every single person in view of the bus stops to wave and see who is on the bus! The bus was open air, and we were treated to a refreshing sprinkle for a few minutes. 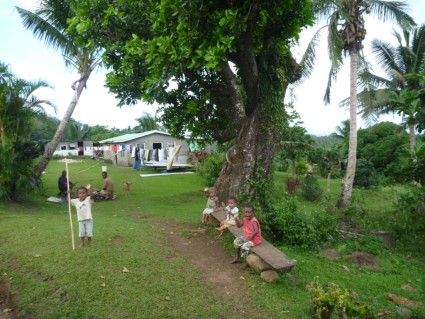 We are now on our way back to Savu Savu to deliver Kristine and Kolby to the first of several flights they will take home to Vancouver. The bogawalu is now officially complete, all 8 days of it, which is perfect timing. The winds have given us great sailing and now its time to do some more diving. We've stopped in Viani Bay near the famous Rainbow Reef. We are guided to the dive spots by a local by the name of Jack Fisher, who has been taking yachties out to the nearby dive sites here for years. We did our first dive yesterday on the White Wall- a spectacular dive which starts with a cave chimney just below the surface down to about 65' where it delivers you to the top of the white wall. 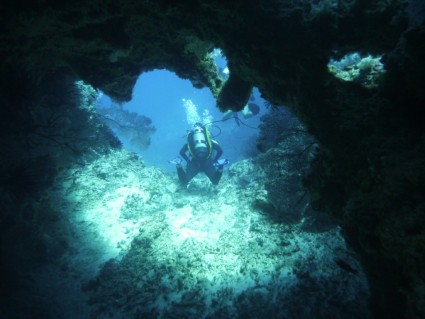 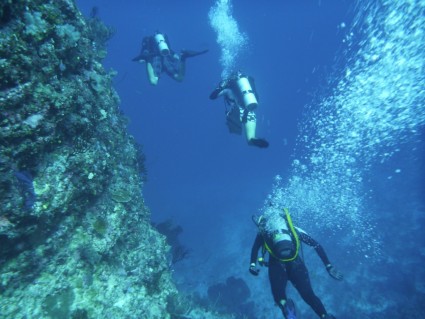 We continued down to about 100' where a bewildering display of white coral covered the entire wall for as far as the eye could see. I can't decide which is more beautiful here in Fiji- above or below sea level. You decide! 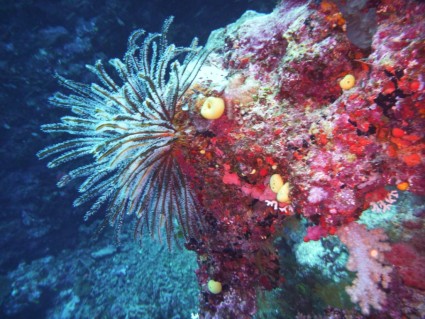