Downwind start, spinnackers out, Chris at helm of "Kiwi Auckland"
We happened to arrive in Musket Cove on the second day of the 28th Annual Musket Cove Regatta. Things were hopping at the Musket Cove HQ, and we grabbed a mooring buoy and enjoyed the festivities. Musket Cove is a wonderful mix of yachties life and resort life, starting with the perfectly located Island Bar just off the docks. We were invited to sail on a 58' sloop for the round the island race. "Kiwi" is home to Deb and Chris and their two children, and was a great boat to be on for the race. It wasn't Chris's first time at the helm for a race, so we were competitive right from the start. The race itself was a blast, we had fun watching out for reefs, and other boats. On the downwind leg the wind started to build and become gusty, adding to the general level of amusement we watched as spinnakers blew and catamarans took off like someone shoved the pedal to the metal! We had a fast race with good wind, and crossed the line second overall! The regatta was a huge amount of fun, and finished off with a dinner and dance. With an open (free) bar that went for several hours, great prizes for winners, and the fantastic "Fiji Police Band" we danced in the sand into the night. 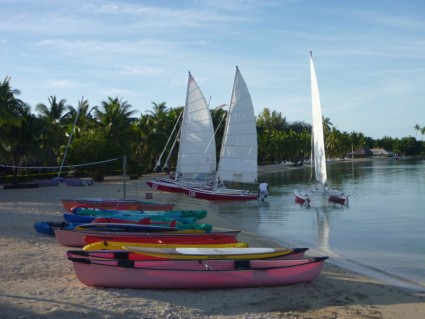