Through the Looking Glass

As I washed my morning coffee cup, the sun cast its beautiful deep greens and yellows on the twin peaks. We had been ashore yesterday and arranged for a guided hike to the top by one of the villagers. When we were met at the beach with our kava for sevu sevu, to our surprise, without the usual pomp and ceremony our kava bundle was taken with a bit of clapping right on the beach. That was a first.
After the 'ceremony', we wanted to stretch our legs a bit and were shown the path from the village to the Octopus Resort. The path is well marked and travelled regularly by both guest and villagers. Our village guide was a young man with a strong build who looked like he could be a rugby player. He was however surprisingly unfit, likely due to the fact that he was a smoker, the unfortunate fellow seemed to have a lot of difficulty climbing the stairs back out of the resort. We don't see this often in the islands where we have observed very little smoking. Seems smokers pay the same price everywhere.
Our guide the next morning was one of the village dancers who performs for the resort. A quick glance at his muscular definition confirmed his level of fitness would not be of concern. The other noticeable thing about Tom was that he was barefoot and carried only a machete. We wore our runners, carried water and food in a backpack, and of course the requisite camera. Tom started us off on a 'shortcut' to the main trail, which amounted to trampling our way through brambles, thistles and fallen wood on the jungle floor. We clutched, found purchase and still slid. Tom on the other hand was graceful, sure footed and very fast. I was thankful when he slowed his pace a bit.
When we finally got to the main trail it was well marked, and didn't really need a guide. Nonetheless we were happy to have Tom lead the way. The trail is steep, taking you up the 1000 meters fairly quickly. Along the way we paused to catch breath, wipe sweat and take photos. While we did this Tom often cleared the path with his machete, and told us stories about having to almost carry some of the resort guests up the mountain. 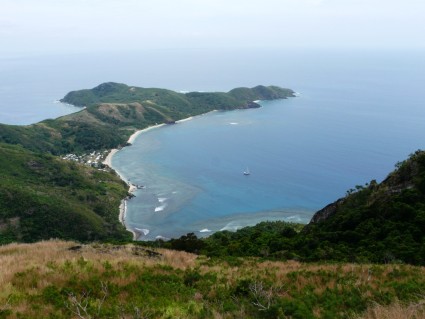 At the ridge between the two peaks the view was spectacular. From there, if you are a mountain goat like Michael, you can pull yourself up a tiny, very steep narrow staircase to the very top. I chickened out on this part, but Michael ventured on to the top for some even more incredible views. 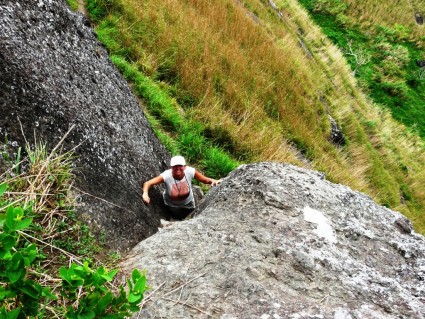 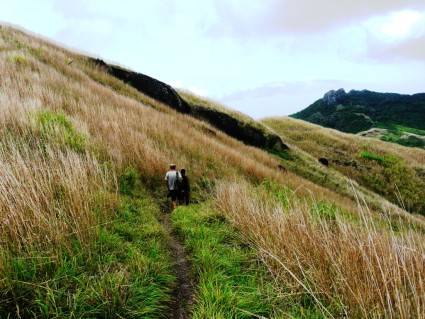 Going down was fun, and we passed by the local swimming hole, several young men splashed about in the afternoon heat. The swimming hole was a series of small waterfalls with pools, some of them built up to allow more water to collect. Tom splashed into the first pool, taking long drinks and washing his face, arms and shoulders of the accumulated sweat, and motioned for us to do the same.
Back at the village we spent some time chatting with Tom and his father on the porch of their small home while we shared some oranges we had brought along for the hike. Tom tucked the money we paid for the hike into his shorts with a shy thankyou, the fee having been worked out yesterday with his father. I believe this is the same price the tourists at the resort pay, but in that case of course the money gets filtered through the resort, and it unlikely that the villagers see much of it. So by north american standards, at about $12/hr Cdn, Tom was recieving just over minimum wage for his 2 1/2 hours of work, By Fijian standards he had just made more money than most Fijians make in a two days of work. Most likely Tom will share this money with his family, but hopefully he won't buy cigarettes with his money!
Before we left back to the boat, Michael spent some time fixing the outboad on the fiber belonging to Tom's family. They were happy to see their engine running smoothly again. 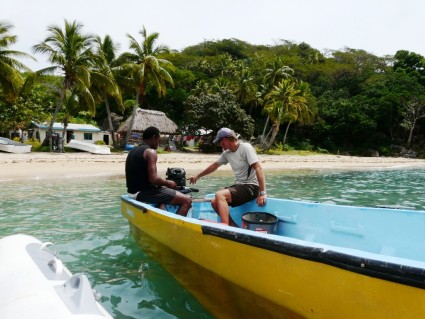 Michael explains to Tom as he goes, hopefully Tom can fix it himself next time