As Kastaway powered into the gust, the rails disappeared under a torrent of water, flooding around my boots where they clung to the now submerged holding. We were on the final blustery leg of the Russell Tall Ships Race. The race has taken place every year since 1976. This year for the first time the race coordinators actually considered postponing the race, but in the end the race was ON! With winds predicted to be gusting to 35-40 knots only the hardiest racers were left in the running. Many of the Classic Tall Ships bowed out of the race. The fleet was still a surprisingly healthy size, with about 50-60 boats competing in two divisions.
As luck would have it mutual friends Ralph and Sharon were enthusiastic and up to racing their beautiful American ketch Kastaway in the Classic Division, and invited us along as crew. Ralph managed to pick up an assortment of crew at the skippers meeting in the morning, including two barefoot young Aucklanders, a local Maori man and a couple from San Francisco who were in the process of moving to New Zealand. Up from Auckland to enjoy holidays in the "Bay", Jamie and Mark really were barefoot and were each sporting surf shorts and a rain jacket. Their mission had been simply to find a morning coffee before they found themselves onboard as Kastaway crew. Both were hardy, low key and very experienced sailors. Roger was born across the bay near Waitangi and had recently moved to Russell. With a woollen cap to shelter his head from the deluge of rain, his long greying hair framed his dark Maori features creating a certain seafaring look. He stood at least six foot tall and wore rainsoaked jeans and loafers under his black rain slicker which hung down to his knees. He had never been on a sailboat in his entire life, but he was dead keen to give it a go. Jay and Sandra were excited to crew for their second time in the Tall Ships Race, bringing their racing knowledge from the other side of the Pacific to the mix.
Despite the predictions for high winds, the first leg of the race was light enough that we shook out all the reefs in both the main and the genoa. As we sailed out of the protection of Russell Harbour, the swells began to grow. Although the race was to take place through and amongst an assortment of islands in the Bay of Islands, the course was exposed to the wide open Pacific on both the start and finishing legs. We raced along closely with our competitors as we watched boats with local knowledge trimming corners off the course by coming shockingly close to rocky points where the ocean swells crashed and tumbled into huge crashing surf. The rain was heavy and constant making it difficult to look up from under the large hood of my rain jacket, but Kastaway took the swells in hand, making a comfortable ride, and giving us all a chance to find our sea legs.
As the race progressed the winds intensified, and two larger Classic style boats blew by us with every stitch of rag out. 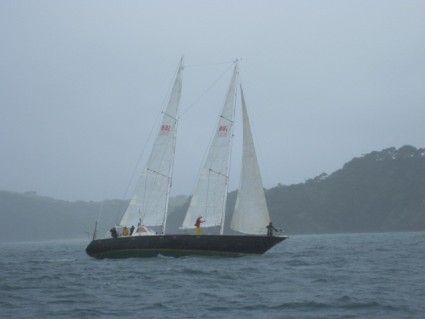 Everything out to the wind off Urapukapuka Island 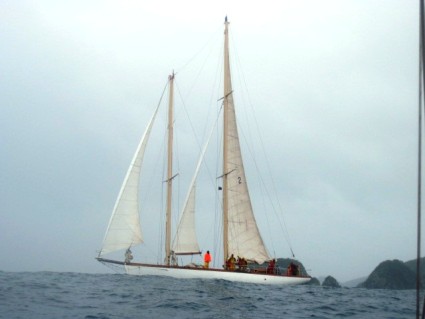 Although we were all busy handling lines as Kastaway surged powerfully along, we all marvelled at the pure beauty of these old boats to handle the heavy seas. The next delight was catching up with a smaller old time open sloop, manned by three crew, as it rocketed along the course heeled at an alarming angle to the water. The helmsman leaned his weight backwards as he expertly guided her along with the tiller. If it wasn't raining so hard I would have tipped my hat to these salty dogs! 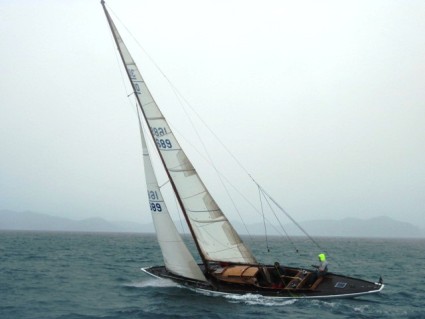 Down the third leg a tremendous bang suddenly broadcasted itself from Kastaway's rigging, and I looked up to see the mainsail tear at the first reef points under the force of a heavy gust. As crew sprang to the sail to bring it under control and into the second reef, Michael kept the boat moving along at the helm. With the momentary confusion of the shredded sail, we temporarily lost vision of one of our close competitors behind our sails. As I looked forward, the competing yacht had tacked in front of us and was screaming a half boat length across our bow. I shouted with alarm to Michael who quickly steered Kastaway from the collision, passing the boat so close we could see the eye popping expressions of the crew on the other boat. 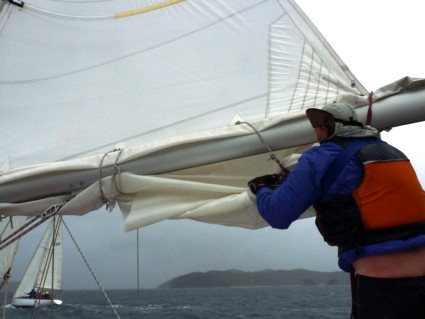 Tidying up the ripped main sail

Behind the huge bluffs of Roberston Island winds were less predictable, and by staying further off the island we managed to catch up to a fast moving sloop which was leading its division. As we rounded the corner reef off the island, we were in a cat and mouse fight for position, with only a boat length separating us. The reef was at most 50 meters off our port side, with our competitor nestled between us and the hard. The ocean spray shot several meters into the air as it met resistance with the rocky shoreline, all to collapse down and drain in powerful waterfalls back into the ocean. With the wide open Pacific on our starboard side, she was by now offering swells in the 3-4 meter range, making boats we were competing with disappear behind walls of waves, with only the sails and masts exposed. On board Kastaway we all found a way to brace ourselves as we managed our particular jobs of grinding winches to trim the four different sails. Despite his lack of experience Roger caught on quickly to his job of trimming the mizzen sail. Throw in two soggy bare foot Kiwis, and the picture was perfect! At the very least, the whole scene would have served up a marvellous poster for the race!

Throughout each twist and turn of the race Captain Ralph remained stoically calm, even with the damage to the main sail and the near collision. His wife and sailing partner Sharon was equally amazing as she even managed to cook some delicious chocolate croissants mid race for the crew. Enthusiastic, encouraging and ever calm, owners Ralph and Sharon are simply wonderful people to be out in this sort of an adventure with. 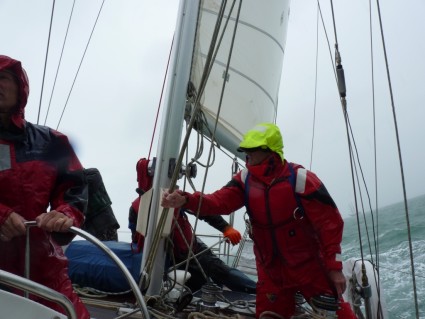 When it came down to the final leg the wind intensified to its previously predicted speeds. Michael stood at the wheel, water pouring from every angle of his body in steady streams, as the heavy rain , whipped up by the fury of the wind pelted his body. We were a soggy crew as we buried the rails through several more gusts, causing a splashy mix of salt and rain water to crash upon our already thoroughly soaked gear. Kastaway crossed the line in fine form, fourth overall, and placed second in the Tall Ships Division!

After bringing the party below decks, we all started to dry off as we wetted ourselves in a different fashion with hot and cold drinks. When I asked Roger, the never been on a sailboat local Maori what he thought of the race, he summed it up nicely. How did you find the race Roger? "It was fun, but the difficult part will be in describing my adventure to my family!" I can only imagine!

The Tall Ships Race Day wraps up with a huge Hangi celebratory meal. This is the traditional feast of the Maori people- all in all 900 meals were carefully prepared, wrapped in tin foil and cooked in a massive underground pit. After the race prizes, several men uncovered the oven, deftly digging away the hot, water soaked earth. The heat generated a huge billow of sweaty mist as the covers were lifted off the food. On the top were hundreds of huge mussels, slowly smoked to perfection over the course of the day. Wrapped in the individual tin foil meals was a generous assortment of beef, chicken, and root vegetables, all deliciously moist and fragrant. Despite the rain, the crowd spread out across the grassy hillside and using a half of the mussel shell as their sole utensil, dug into a well deserved meal. 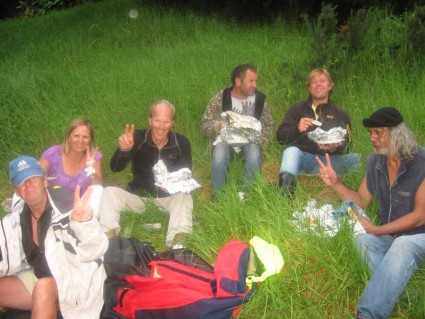 The crew digs in using the mussel shell as a spoon

But the fun wasn't finished with the Hangi. In the 1800's Russell was a bawdy, rowdy whaling community, known as the wildest corner of the entire Pacific. It seems these Kiwis in Russell still remember how to throw a party! As the last morsels and mussels were enjoyed, a live band cranked out dance music under a huge tent where copious amounts of beer and wine flowed. Dancing barefoot through the night, the crowd finally dispersed sometime after midnight. We eventually poured ourselves into our dinghy to make our way back across the windy and wavy bay to Paikea Mist, exhausted but perfectly satiated under the cloudy night sky. We had just sailed a magnificently exciting Tall Ships Race aboard a beautiful yacht with a crew from all walks of life, ate amazing food and danced ourselves silly to good old rock and roll. Life is good, and cruising life is simply divine.
Check out photo gallery for more photos - all photos courtesy of Sharon and Sandra
Comments
Newer Older
Contents