"Security, security, security. Marine advisory for Sea Area Abel: Significant debris liberated by recent severe flooding as well as whale carcasses from the recent mass whale stranding on Farewell Spit are presenting an extreme hazard to all mariners in the area. Mariners are advised to exercise extreme caution and keep a keen lookout for floating flood debris and whale carcasses in the Tasman Bay area. Small vessels are advised against travelling at high speeds at night. This advisory will remain in effect until further notice. "
Hmmm....all of this after we rounded Farewell Spit into the ripping and roaring Tasman Bay at night fall!
Despite torrential rains and major flooding in the beautiful city of Nelson and surrounding areas earlier this year, we have done nothing but soak in the sunshine since arriving in the Abel Tasman National Park. But the signs of the recent flooding are everywhere. The first morning after passage we woke up to find ourselves anchored in paradise- a ring of beautiful golden beaches punctuated by towering bluffs at either end of the large bay. Across on the deep green hills, here and there we could make out where huge chunks of land had slid down the hillsides, bringing down everything attached with it, and leaving deep scars of barren golden brown earth.
Our first anchorage in Totaranui Bay was chosen for two reasons- respite from the strong south westerly winds and the ease of slipping into it in the dark. Our choice left nothing to be desired with regards to these two parameters, but also turned out to be a gem of a spot for hiking the famed Abel Tasman Coastal Track. The local south islanders flock to the lovely Totaranui campsite for their summertime fun, situated near the end (or beginning) of the Coastal Track.
As the morning sun broke over the sandy beaches, campers took to the water, some kayaking, fishing, and water skiing while others enjoyed early morning swims or skimboarding in the tidal waters. We watched as water taxis zoomed in and out of the campsite depositing hikers and campers to the pristine beaches. We thought the campsite was busy until we discovered that it was operating at 25% of capacity! The floods had ripped out huge portions of the road into the campsite, meaning that the only access to the campground was by water or by trail. The road damage is so severe they estimate they will need at least a year to rebuild it. At the height of the floods Nelson was completely cut off- every single road that went into town was washed away. We've been told that a month later all roads are now open, although many secondary roads to places like Abel Tasman National Park have only one lane with alternating traffic.
Once we had cleaned up our salty boat from the passage, we took to the trails and hiked high above the park to the top of Mt. Gibb, where we could see clear across to the tip of Farewell Spit, along the long sandy crescent shape of Golden Bay, and down below us the deeper cut of Wanui Bay. Surrounding Wanui Bay, lush and cool forests were anchored on the steep mountains that fell into the large bay. Here so many landslides scarred the hillsides it appeared as though a mighty cat had clawed angrily at the terrain. 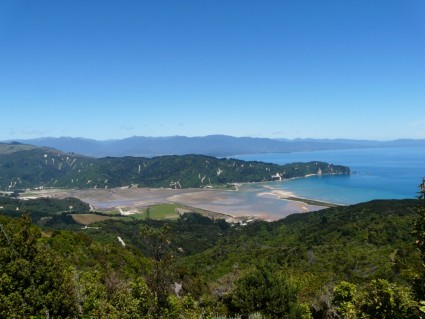 We crossed small streams where dirt and sand had been pushed 10 feet high over their banks creating large dunes alongside what was previously a beautiful meandering stream. Despite the obvious flood damage, the hike was stunning, dropping down from the high ridge into a series of pristine golden sand beaches, all framed by metamorphic granite slabs from some prehistoric volcanic period. The birdlife was also interesting along the way, we spotted the New Zealand Weka, Bell birds, Tuis, as well as young families of puheko and California quail.
Eventually weather dictated that we leave Totaranui, so we sailed downwind a short distance in 30 knots of wind to Torrent Bay, fondly called "The Anchorage" by locals. Torrent Bay is considered to be "The" all weather anchorage in the area. When we arrived we found about a dozen local sailboats anchored in the bay, many with young kids enjoying the last few days of their school summer holidays. Along with two cruising other boats, S/V Tenaya (USA) and S/V Jackster (GB), we found plenty of swing room amongst the boats and settled in to enjoy the quiet anchorage.
Michael and I were immersed in some afternoon reading when we looked up to see a sail boat with a high ratio rig and fancy sails swing into the bay and anchor beside us. Astutely, Michael guessed that the sleek sloop was the first one in as part of a race, and guessed the bay would soon be swarmed by more raceboats. Was he ever right! What a fantastic site! I hiked to the ridge overlooking the race and was amazed to hear the thunder of the sails as the boats tacked upwind on their last leg of the day. From my vantage point high above it appeared as if the boats might tip right over, so much of their hulls were exposed in the gusty 25-30 knots of wind they were fighting.
In The Anchorage, high tech race boats of all sizes, many with towering masts, open transoms and expensive sails piled into the bay, instantly taking up every available inch. With huge numbers of crew swarming the decks they settled in quickly, peeling off sailing gear and simultaneously cracking beer as they swung lazily on their undersized anchors in the warm anchorage. They hung out on their open sugar scoop cockpits, laughing, and enthusiastically discussing the pros and cons of their race strategies.
Like all good racers, their party continued on the beach into the evening. Being lean and mean race boats not willing to take much in the way of gear to weigh the boat down, not many had any means of actually getting to shore! We got a giggle watching their token teensy dinghies overloaded with heavy set racers making their way to shore. We guessed that the same operation may not be quite as safe on the other end, when the partiers were ready to come back to crash on their boats that night. We soon took pity on their means of transportation and offered a ride to shore for the crew on the raceboat nearest us, "Fourth Diminsion" from Nelson. We were immediately invited to the party, but as we already had dinner plans with Jacqui and David on S/V Jackster, we had to turn down the invite.
All six of us "cruisers" had a great meal aboard Jackster that night. We were mid laughter following a hilarious story told by David when we all froze- we had a guy in swim trunks walking from the back swim steps over the aft lazerrette approaching Jackster's cockpit! Wiping his dripping long dark hair off his forehead, the young man asked in his musical Kiwi accent if this was the race boat Sequiter 2? It took a second of adjustment before we all breathed a collective sigh of relief and joked that if we added a few meters to the mast perhaps we could be! Andrew entertained us for the next half hour with racing antics. While we sat and shivered in fleece jackets, Andrew held his own in true 'Kiwi by definition' fashion: sitting in his wet swim trunks, drinking a cold beer, he produced not even a shiver, seemingly immune to the chilly wind that was coming in from the south. When he finally said "good bye" Andrew took a nice dive from the side of Jackster, swimming to the next boat undoubtedly for another cold beer and some more story swapping! We, on the other hand clambered into our dry dinghies to drive home, keeping a keen looking out for floating debris!