Beechloft- Shirley and Stewarts home away from home

Looking back down Tory Channel to South Island I felt an unexpected twist of sadness as we said our goodbyes to Marlborough Sounds and our cruising experience on South Island. Cruising the 'top end' of South Island is a cruiser's dream come true. Abel Tasman with its golden beaches and lovely natural 'bush' alive with native birds, Pelorus Sound with its long meandering inlets, and Queen Charlotte Sound with its place in history as the foothold of both Maori and European settlers.

The entire experience would be almost superficial without the opportunity we've had to weave into the fabric of the folks that call this part of the world home. They have to rank as some of the most welcoming people we have ever encountered.

We were treated to spectacular weather in Abel Tasman, where the hiking was bar none. We spent days on the trails there, enjoying the lovely walks and vistas. High up the River Track we eventually reached a magnificent pooling, splashing, gushing waterfall by scampering up over and around large boulders. In the natural waterslide at Cleopatra Pools I enjoyed an exhilarating chilly ride down the natural waterslide worn smooth by the constant water rub. In Nelson we became 'members' of the Tasman Cruising Club, which is an active Racing/Cruising club in the heart of the Nelson Marina. We purchased a club burgee and in return given a month of access to the mooring buoys the club has secured in Pelorus Sound. The entry into Pelorus Sound through French Pass is a challenging 'tidal stream' similar to the ones we've experienced in our coastal cruising in the Pacific Northwest with rushing water, whirlpools and drops. The trick is finding slack tide, which seems a bit of an elusive quest. When we went through at 'slack tide' the water was still rushing by at a few knots in the opposite direction, apparently affected by recent storm activity in Cook Strait! Once through the pass, the options in Pelorus Sound were unlimited. We enjoyed a mixture of fantastic hikes, kayaking, resort dining, and sealife encounters. Among other sealife sightings, we watched as a New Zealand fur seal devoured an octopus just off our boat, and were thrilled to watch dozens of sting rays in the clear waters of Waterfall Bay as they swam under Paikea Mist.

In Queen Charlotte Sound we hung the hook in historic Ship's Cove, where Captain Cook returned with his crew seven times. In nearby Motuaru Island Cook proclaimed the bird song to be the most beautiful dawn chorus he had heard anywhere in his travels. Motuara is now a bird sanctuary, and a lovely anchorage can be found off its south end where bird song still fills the air. To this day it is easy to imagine Cook's men revelling in the safe anchorage, with its ready supply of fresh water, seafood and amazing surrounds. We hiked part of the famed Queen Charlotte Track from here, up to the Saddle overlooking Resolution Bay and Queen Charlotte Sound.

Divine yes, but what made our experience so magical?
Simple. Within the kaleidoscope of pure natural beauty we have had a fantastic time meeting South Islanders. From being invited to an impromptu fish smoke on the beach (despite 30 knots of wind at the anchorage) at Adele Island , sharing a champagne toast on the top of Motuaru, to invitations inside homes to share good times, good meals and great stories our adventure and encounters have been some of the best.

Both Michael and I agree that the very best part of cruising here was the people. Everywhere we went we have had the pleasure of meeting and making new friends and enjoying a true New Zealand welcome. We will never forget

Fish Cook out on Adele Island in 30 knots of wind. 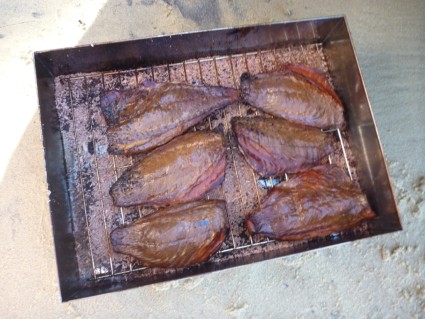 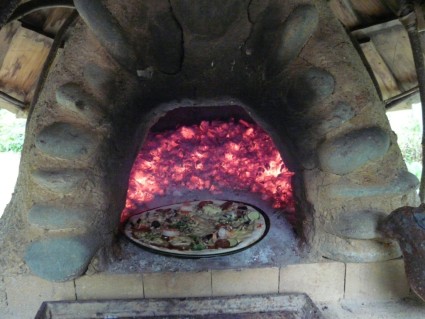 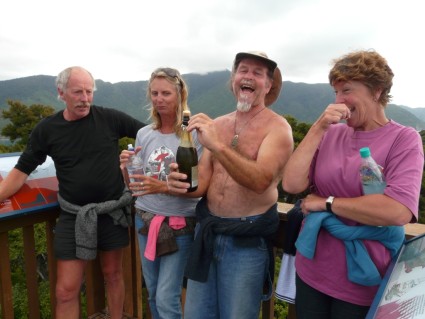 Donations of fresh fish from these guys and other locals- blue cod, paua, and others- Thanks for the feeds!

Dinner at Jonathan and Katies- Bay of many Coves 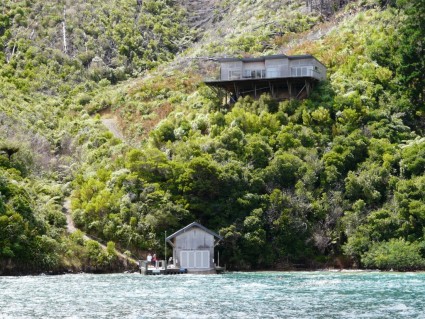 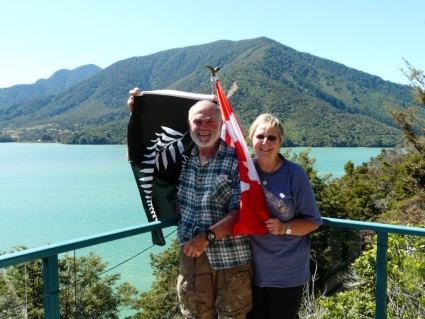 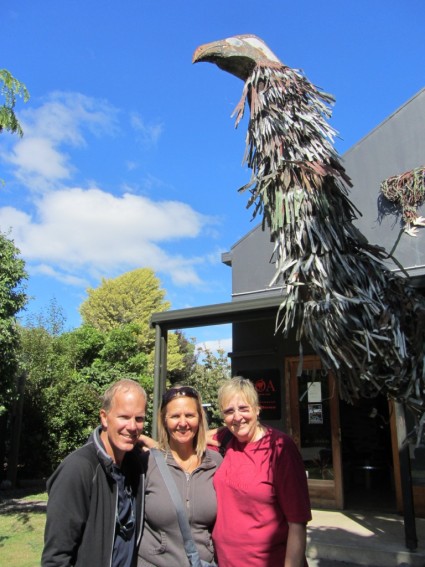 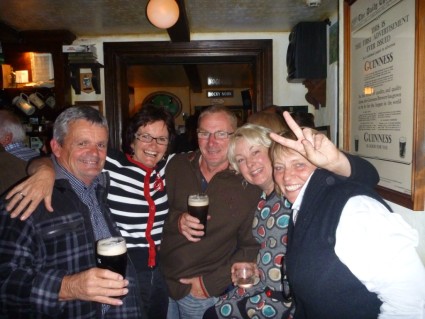 is there a law against having too much fun?

To the wonderful people who made this part of our journey so special, thank you from the bottom of our hearts. Of the many friends we have met along the way- our door at home in Vancouver and our companion way on Paikea Mist is always open. Just say the word.